Morgan Whittaker was thrilled to cap his Imps debut with a decisive goal on Saturday. 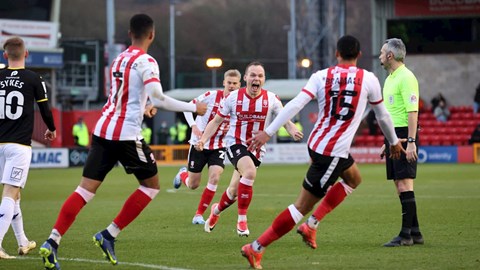 The forward was pleased to have helped the team secure a 2-0 victory over Oxford Untied and has quickly settled into his new surroundings.

He said: “The main thing was getting the three points and getting the goal was the cherry on top of the cake. I’m so happy to have scored and see the team winning.

“There could have been a lot of pressure on me but I didn’t feel any - I’m happy playing my football, with the fans, the team and the coaches, it’s perfect.”

Whittaker believes the squad showed what they are made of and feels they are ready to take on high-flying Sunderland on Tuesday night.

He added: “You can see how good we can play football and the way that we want to play football, entertaining and scoring goals, and I think that’s what the fans want to see.

"We’ve got a tough game on Tuesday against Sunderland, but I think we’re ready and this match shows that.

“Obviously we don’t want to be where we are in the league but with the players we’ve got we can and we will get out of this situation. I think this match, with the football we played, it just shows what we can do.”

Tuesday's game against Sunderland at the Stadium of Light will be available for live streaming both domestically and internationally. Click here to see the options where you are.