It was a night of goalmouth action at LNER Stadium this evening but it was the Premier League Champions, Liverpool, who progressed to the fourth round of the Carabao Cup.

Ultimately a display of top class finishing from Liverpool won the tie, swinging the game in their favour by the break, Xherdan Shaquiri opened the scoring before a brace from Takumi Minamino and two from Curtis Jones saw the visiting side race into a five goal lead but Michael Appleton’s men kept going and pulled a goal back with Tayo Edun’s first for the club. Marko Grujic extended the lead for the away side but Lewis Montsma powered home a second for City.

Although the scoreline would suggest it was one-way traffic, there were opportunities for The Imps and they certainly deserved to make their mark on the game.

Liverpool opened the scoring with a piece of pure quality, Xherdan SHAQIRI blasting a perfectly placed free kick over the wall and right into the top corner giving Alex Palmer no chance whatsoever from 25 yards. The early goal for the visitors lifted their confidence somewhat, as they monopolised the ball, but The Imps weren’t downbeat and showed terrific energy closing down and making the game as difficult as possible for the opposition.

That close pressing and high energy defending was limiting chances for Liverpool but given the opportunity to shoot from distance they weren’t shy and it was another clean strike which extended the advantage for the visitors, Takumi MINAMINO curled the ball home.

City though pressed quickly from the restart and it was a slick, well worked quick free kick which led to The Imps’ first chance of the game as James Jones got free in the box to shoot but Adrian matched the effort, diving low to his left to save.

That close call was to be rued as Liverpool scored a third, Divock Origi won a header and nodded back to Curtis JONES who caressed the ball into the corner. The Red’s number 17 was at it again before the break, twisting and turning before smashing the ball home from outside the area. City showed no signs of letting the workrate drop and just ahead of the break Anthony Scully tried to chip Adrian from fully 40 yards, but as the Liverpool stopper scampered back towards his goal the ball drifted just over the top.  Tayo Edun then created an opportunity for himself dancing into the area showing fleet of foot and hitting a hard effort towards the near post, but Adrian was there to save.

Jurgen Klopp’s side made it five within seconds into the second half, Palmer made a saved from Harvey Elliott as he tried to lift it over the City stopper, but MINAMINO rolled home his second of the night.

The Imps were so close to getting a goal for their efforts following a fantastic ball from Jorge Grant which sent Anderson through in behind the defence of the visitors, his effort was saved by Adrian the ball rolled to James Jones and his effort was blocked then Edun also went close. Grant then forced Adrian into a save after cutting in from the left, but his curling effort was well marshalled by the Liverpool ‘keeper, the Imps were having their best spell in the game as Scully was the next to be denied by Adrian from close range.

Eyoma had a great chance when Grant dropped but The Imps did have a goal to celebrate and it was certainly deserved, as Tayo EDUN found space in the box, jinking one way then another before looking up and stroking home. 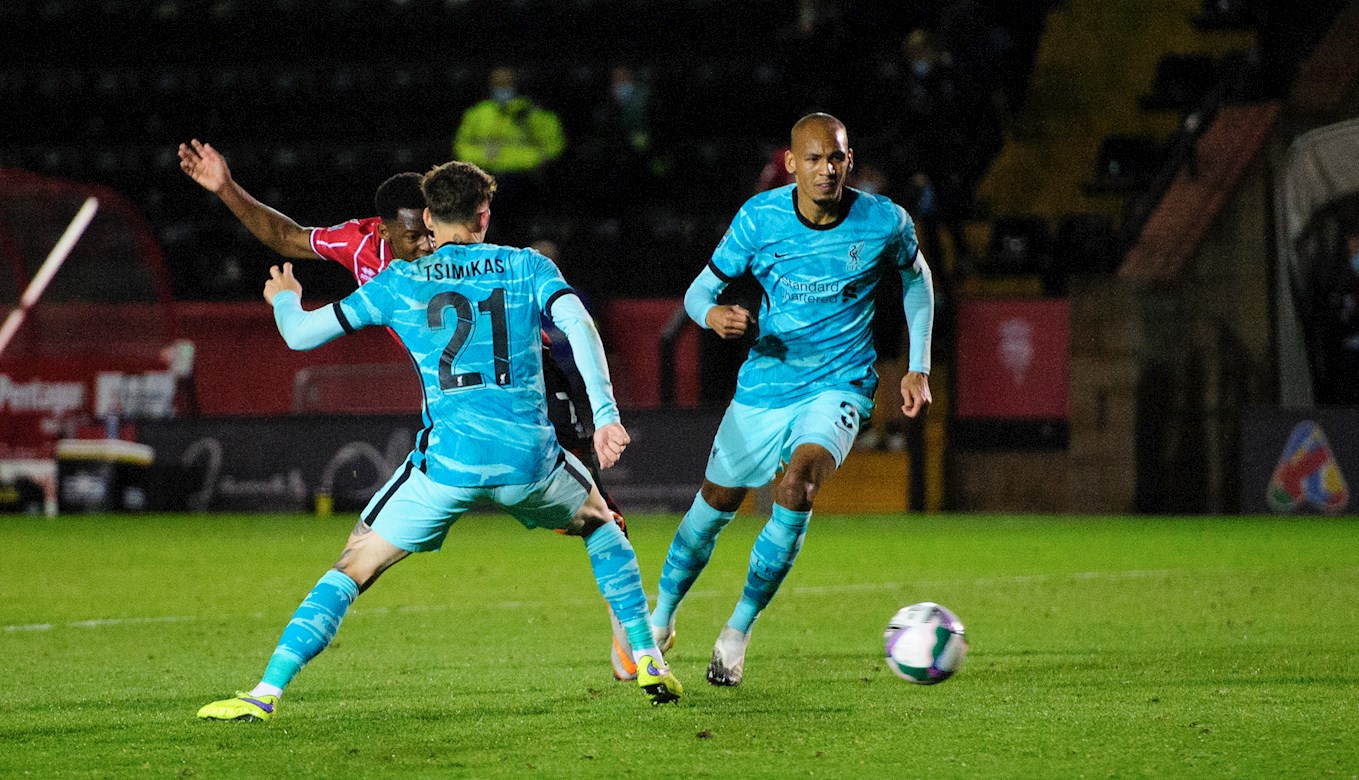 The goals kept coming as Marko GRUJIC fired home from the edge of the box to give the visitors a sixth, but The Imps weren’t done either as Grant’s corner was met by MONTSMA with a powerful header which cannoned off the underside of the crossbar and appeared to bounce over the line but Tom Hopper made sure before the visitors could think about it.

A stooping header from Theo Archibald forced Adrian into a great stop as City continued to show they weren’t prepared to lie down.  City pressed for a third goal, and it would have been deserved but the last word was had by Divock ORIGI for the away side.