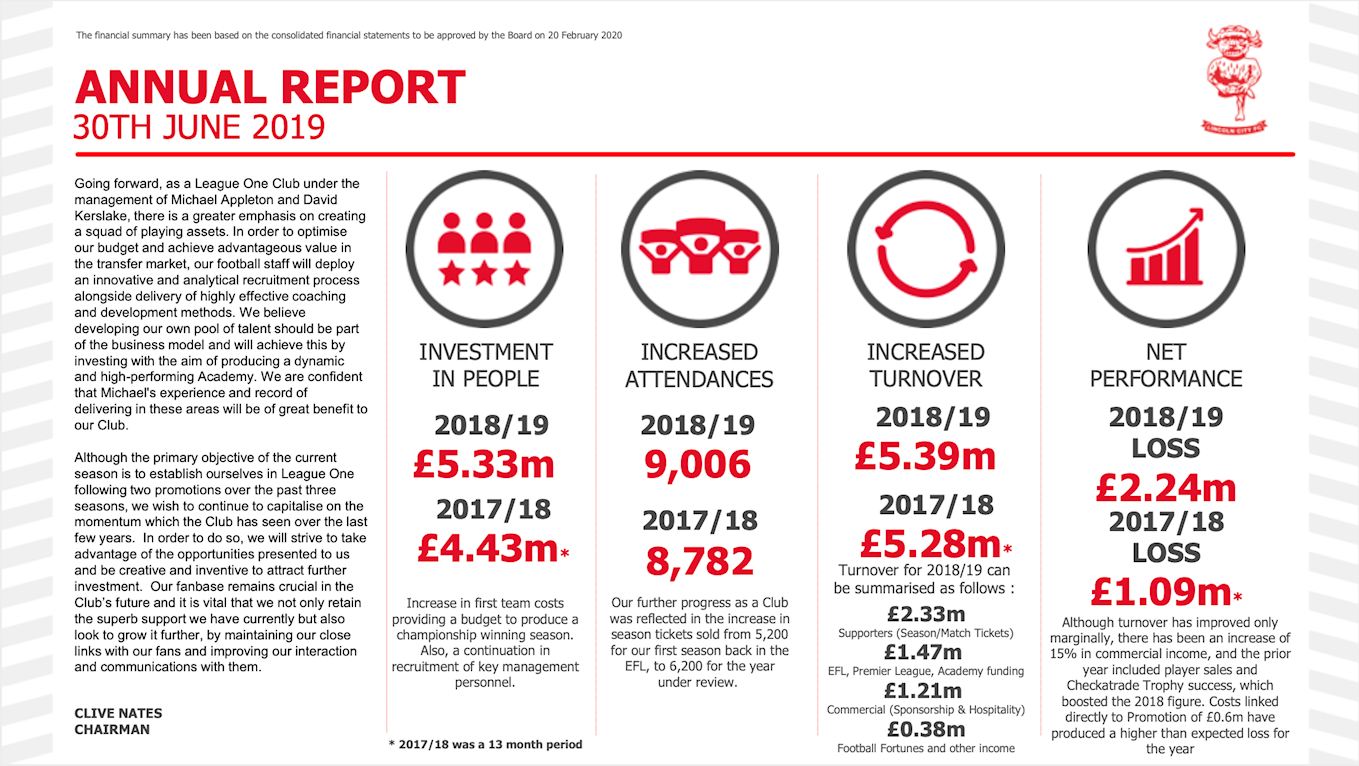 Our growth off the field and engagement with the supporters continues to develop. Following the successes of 2017/18, where the average attendance across the season was 8,782, the 2018/19 season saw season tickets capped at 6,200 to cater for match by match ticket availability, with aggregate attendances growing to an average of 9,006.

The achievement of lifting the League Two Trophy may have been the focus of public attention over the last twelve months but there were gains off the field which are also worthy of mention. We are proud to note that the Club has been awarded the EFL Family Excellence award. This award is given to Clubs who endeavour and indeed deliver on their commitment to everyone attending fixtures, starting with the ticketing process right through the whole matchday experience. Achieving this award is testament to the hard work put in by all the staff behind the scenes at LNER Stadium.

Lincoln City was also voted the 3rd best in an EFL supporters’ survey on match satisfaction and we were ranked 6th across all 92 clubs in the recently released 2018/19 Fan Engagement Index.

The Company’s turnover increased marginally from £5.28m in 2017/18 to £5.39m for the year under review. The figures for the previous period were boosted by the Checkatrade Trophy success and player sales.

Growth in the commercial department, through sponsorship and hospitality sales reflected the largest percentage increase in turnover (15.3%) , which equates to £1.2m in added business. Matchday revenue improved by 5.6% to £2.3m while EFL distributions, Premier League solidarity payments and Academy funding contributed almost £1.5m to the total.

In the summer of 2018, an increase in funds enabled management to build a squad capable of achieving our aim of promotion. This saw the Club break its transfer record with the signing of John Akinde and a number of other notable signings on permanent contracts. With the team sitting at the top of the table in January, significant further expenditure was authorised to bolster the team for the final stretch.

Off the field, the Club continued to recruit key management personnel in order to grow the business. This investment in people and staff infrastructure, combined with increased first team costs contributed to total staff spend rising from £4.43 m in 2017/18 to £5.33 m in the 2018/19 year.

The accounts for the 12-month period to 30 June 2019 report a net loss of £2.24m. This loss incorporates a continued investment in the Club’s assets, systems and people.

Costs linked directly to promotion amounted to £0.6m. A proportion of these costs together with the additional expenditure on players in the January transfer window were the main contributors to a higher than expected loss for the year ending June 2019.

The Parent Company and underlying investors continue to support the Club by injecting equity when necessary and a further £1.4m in new shares was taken up in the six months following the year-end.

The Annual financial statement can be downloaded HERE