The Imps were unlucky on the road as Elvis Bwomono scored a last minute winner for Southend United at Roots Hall in SkyBet League One action.

The Imps’ starting 11 saw just one change to the line-up which started against Portsmouth on Tuesday night. Harry Anderson was replaced by Zack Elbouzedi who came into the side to make his first start in a Lincoln shirt. 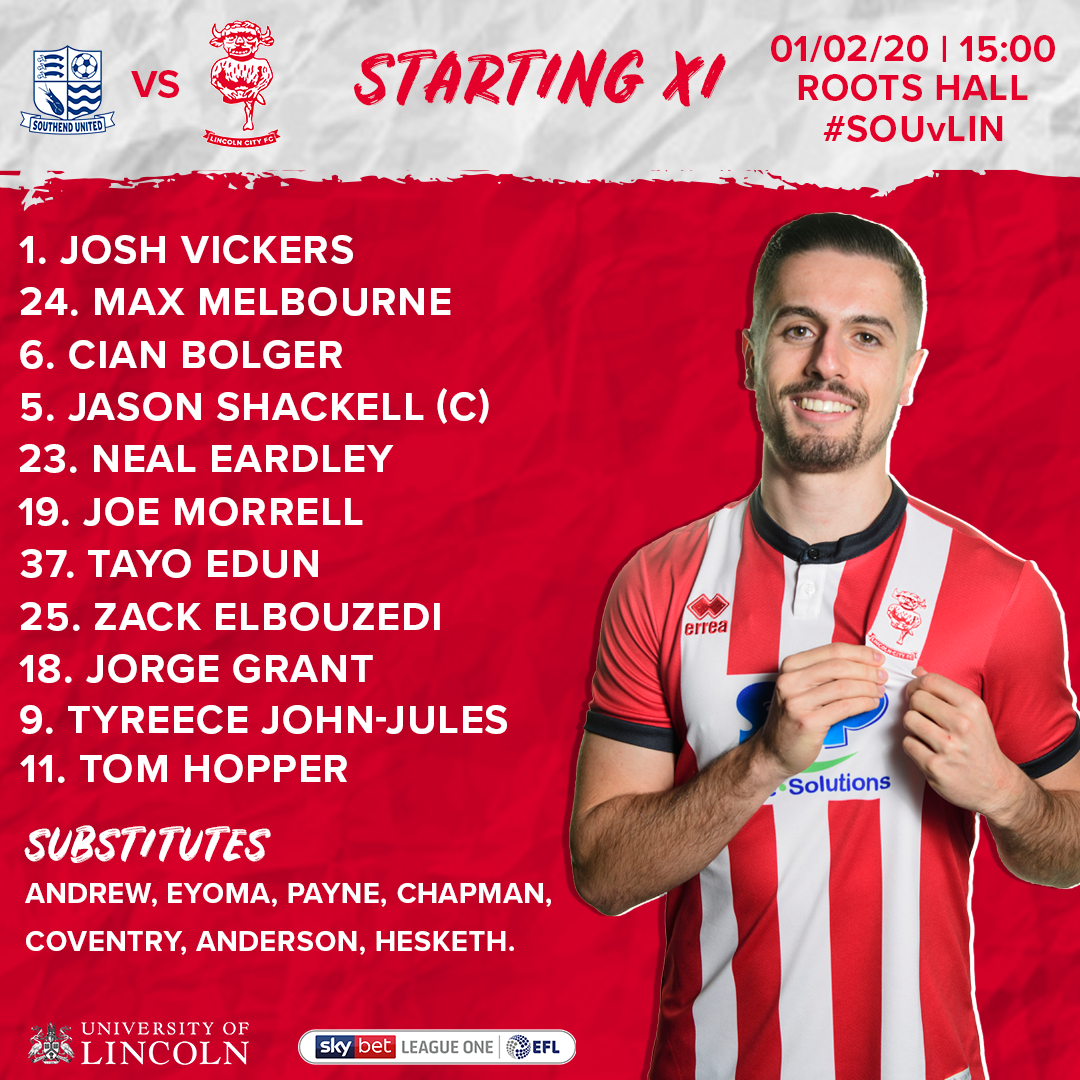 The Imps controlled the opening stages of the game getting forward with runs from Jorge Grant and Zack Elbouzedi. It was the Irish winger who created an opportunity for City playing a great one-two with Tayo Edun before sliding the ball across goal to Tyreece John-Jules, however Southend shot-stopper Mark Oxley just beat the Lincoln forward after calmly coming off his slide to meet the ball.

City won an early free-kick with Harry Phillips fouling John-Jules just outside the area. The United man received a yellow card for his challenge. Grant stood over the set piece before forcing Oxley to produce an impressive save to keep the scores level.

Imps defender Max Melbourne showed his attacking ability with an impressive run from left back into the centre of the park, just as the fullback cut inside, he was fouled winning a free kick for Lincoln. Grant stood over it again, this time trying to find Jason Shackell or Cian Bolger at the back post, but the cross was just short allowing the home side to clear.

Grant was through on goal when Edun played a great ball over the top of the Southend backline. However, despite the midfielder bringing it down with a superb touch, the linesman had his flag up to halt play for offside.

The home side had their first real chance of the game with a free-kick on the edge of the box as Charlie Kelman was fouled by Jason Shackell. Tom Clifford stepped up the take the set-piece before sending his shot just wide of Josh Vickers’ left post.

There were handball appeals from the Southend players and supporters as Stephen McLaughlin fired a shot straight into Joe Morrell who was standing just inside the penalty area. Referee Charles Breakspear was soon to wave play on.

City started the half with a change as Harry Anderson came on for Elbouzedi. Bolger played an important part in the opening stages preventing two attacks from Southend, the first in his area when he put a great challenge in to stop Kelman breaking through. The forward had another opportunity shortly after, missing what looked like a clear opportunity as Jason Demetriou produced a fine delivery from the right side.

The first corner of the game came early in the second half when Southend continued to attack the Imps backline. Isaac Hutchinson fired one into Sam Barratt but there was a clash of bodies in the box stopping play for Melbourne and Mark Milligan to receive treatment.

Not long after the players had returned to the field, Southend’s medical team were back in action treating captain John White who was forced off with an injury as Brandon Goodship replaced him.

Southend took the lead just after the hour mark. Phillips’ looked as if he had beat the Imps goalkeeper, but his shot rattled off the crossbar, falling to Kelman who slotted it home before running off to celebrate in front of the United fans.

The Imps were looking for a reply just second after the kick-off as Tom Hopper saw his low driven shot saved by Oxley in the home side’s goal.

Anderson gave away a silly foul in the centre of the field when he dived in on Clifford. The hosts took a short free kick allowing Milligan to play a ball over the top to Hutchinson, he then played it onto Demetriou who attempted to beat Vickers from distance, but the Cypriot international could only watch his shot go bounce wide.

John-Jules was the first Lincoln name in the referee’s book for a foul on Milligan in the Southend half. The Lincoln man was on the other end of things shortly after winning a free-kick near the halfway line.

The Imps attempted to fire one up but no opportunities arose allowing the home side to clear. Michael Appleton made his second change as Hopper was replaced by Jake Hesketh. Southend followed by replacing the injured Phillips with Miles Mitchell-Nelson.

In a similar event to Lincoln’s attack in the first half, John-Jules found himself through on goal with Oxley to beat however, the Southend goalkeeper was again quick off his line and easily went down to collect the ball.

Demetriou also received a booking, 10 minutes before the end. The Imps made their final change of the game bringing on Jack Payne for Edun.

ANDERSON scored the equalising goal for Lincoln shortly before the 90 minutes. Grant delivered the corner to Bolger who flicked it o to Anderson, allowing the Imps winger to head home the leveller moments before normal time was up. Bolger was booked before the restart.

After the fourth official showed the board for seven minutes added time, Southend made their final change bringing Kenny Coker on for Hutchinson.

Hesketh forced Oxley to backtrack in the Southend goal, as he tipped over the Imps' midfielder's attempted lob for a corner. The set-piece was comfortably dealt with by the home side as the game went end of end in added time. With United attacking at the other end, Vickers was forced to rush off his line shaving Clifford's shot with his face, resulting in a corner.

Elvis Bwomono scored the winning goal for Southend United deep into added time, heading in at the front post.