Lincoln City Football Club have released the annual report for the financial year ending June 2018 and here are some of the key points. 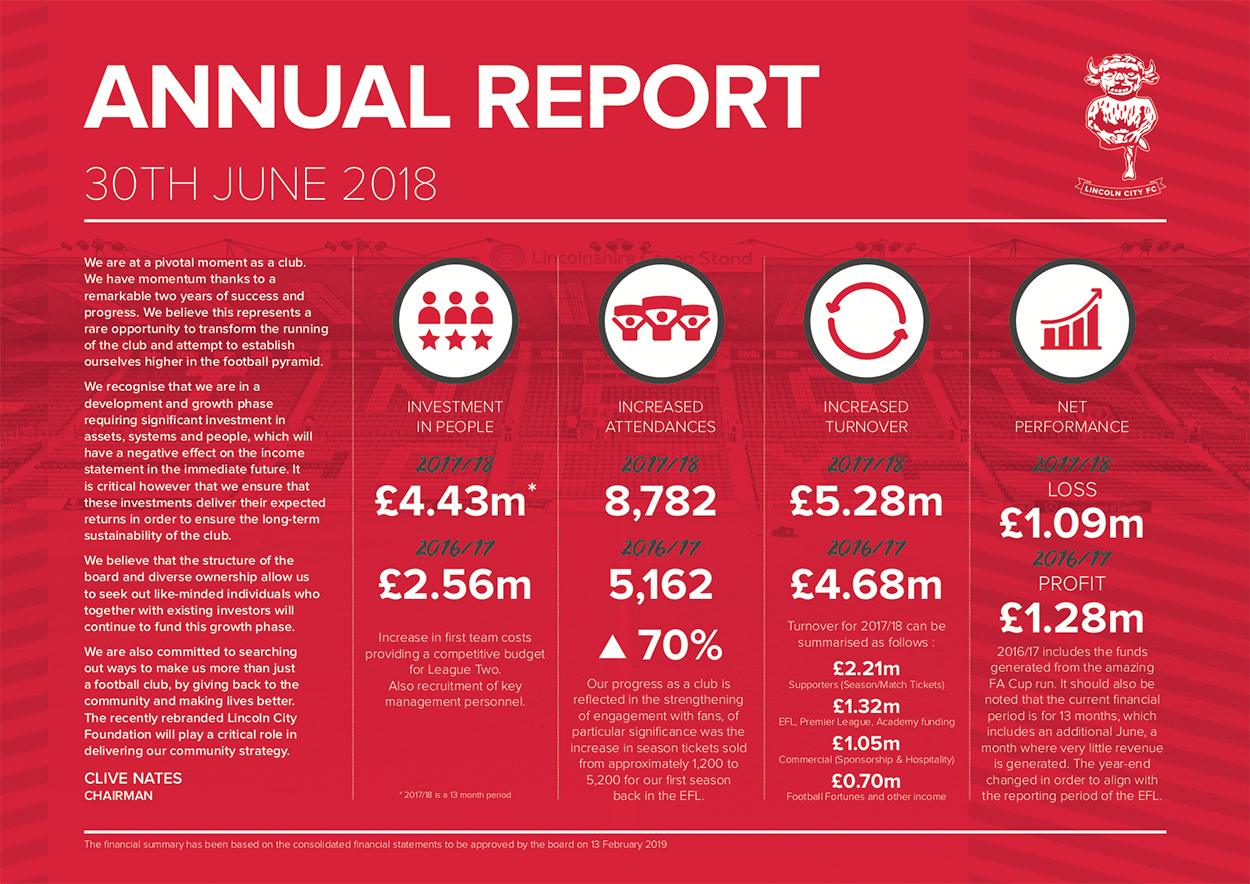 The engagement with fans and the people of Lincoln helped the Club achieve a remarkable average attendance for league matches at Sincil Bank of 8,782 for the 2017/18 season compared to 5,162 the previous season. Our average league attendances were the second highest in League 2 and would have ranked us ninth in League 1.

Our progress as a club is reflected in the strengthening of engagement with fans. We continued to grow attendances in League 2 after a near doubling in average attendances in the previous season, with a further 70% increase achieved for the 2017/18 season. Of particular significance was the increase in season tickets sold from approximately 1,200 to 5,200 for our first season back in the EFL. Season ticket sales showed further growth for the current 2018/19 season, climbing to a remarkable 6,200.

The company’s turnover increased from £4.68m million in 2016/17 to £5.28m. This increase was achieved despite the previous year including the significant revenues from our memorable FA Cup run. With the club back in the Football League, EFL distributions and Premier League solidarity payments contributed a significant £1.32m.

The Imps supporters, with our growing home attendances and tremendous away support, helped contribute over £2.2m in ticket related income. Commercial and Hospitality opportunities also increased, contributing over £1 million in revenue in our first season back in the EFL. There was a further boost from the sales of Sean Raggett and Alex Woodyard.

Off the field, one of the most important decisions and actions taken during the summer of 2017 was to search for a Chief Executive. It was clear that the complexities and compliance required by the football authorities had increased significantly since the club was last in the EFL and thus the demands on our people would grow considerably. As a result, we were delighted to appoint Liam Scully to that position and he joined us shortly after the start of the season from Doncaster Rovers.

The on-field target at the start of the year was to provide a competitive first team budget in order to enable a challenge for a top seven finish. According to League 2 benchmarking, we were ranked just below half way for total player costs after the summer transfer window. With attendances remaining buoyant, progress in the Checkatrade Trophy and the prospect for increased investment into the club, we took a decision to adopt a more ambitious strategy in the second half of the season.

The most significant action during this period saw our management team of Danny and Nicky Cowley agree to extend their contracts to the end of June 2022.  We are delighted that despite attention from clubs in higher divisions Danny and Nicky agreed to commit to our club and importantly to relocate their families to Lincoln. We welcome all of the Cowley family to our beautiful city.

In the winter transfer window, we brought in Tom Pett and James Wilson and secured the return of Lee Frecklington to his boyhood club. There was also significant activity in the loan market. Importantly we were also able to extend the contracts of two of our key players, Michael Bostwick and Neal Eardley. Following this increased expenditure, the final benchmarking report for the season saw us move into the top ten for total player costs in League 2.

All of these key investments in people and staff infrastructure contributed to the total Staff costs increasing significantly from £2.56 million in 2016/17 to £4.43 million in the 2017/18 period. It is important to note that due to the accounting period being extended to 30th June 2018 salary costs for 2017/18 are for a 13-month period. Accordingly, on an annualised basis the figure amounted to £4.08 million. The year-end changed in order to align with the reporting period of the EFL.

The year-end was extended to 30 June 2018 to align with reporting period of the EFL, creating a set of accounts with 13 months for the 2017/18 season, effectively reporting an additional month where little revenue is generated.

The accounts for the 13-month period to 30 June 2018 report a net loss of £1.09 million. This loss includes a significant investment in the clubs assets, systems and people. This ongoing investment will have a negative effect on the income statement in the immediate future.

The profit reported in 2016/17 of £1.28m, which included the funds from the FA Cup run, has been reinvested back into the club in a number of ways. A noteworthy development during the financial period was the location of suitable leasehold land near RAF Scampton to build an Elite Performance Centre for the first team. This training complex, with an investment of over £1.3m will ensure that we have the facilities required to help the team operate at the highest possible level.

Despite this ongoing investment the balance sheet remains strong with cash resources of £2.36 million. This was supported by strong season ticket sales for the current season as well as further equity injections.


Following yesterday’s fantastic news of Manager Michael Appleton signing a new contract until 2025, we are really excited to announce yet another prize to the Ultimate Imps Raffle.


The Imps are delighted to announce that forward Anthony Scully has signed a new deal at LNER Stadium, running until June 2023.


Lincoln City are pleased to announce that Remy Howarth has signed a contract extension with the club which will run until June 2022.


The Imps are delighted to announce that First Team Manager Michael Appleton has signed a new four-year deal at LNER Stadium.