The Imps slipped to their first defeat of the season against MK Dons at Stadium:MK as the hosts reversed the scoreline from that famous victory at the end of last season.

Things got off to a bad start for Danny Cowley’s men, as they conceded an early goal scored by Callum Brittain but showed resolve to level through Tyler Walker. However, the hosts regained the lead as George Williams deflected home Jordan Bowery’s effort from close range. The scoreline although not in favour of the visiting side, didn’t tell the whole story as City were almost constantly in opposing territory in the second half and will certainly feel that they were deserving of at least an equalising goal.

City made one change to the side which started the game against Southend United last weekend at Sincil Bank, Michael O’Connor came back into the starting eleven with Cian Bolger swapping places and moving onto the bench. 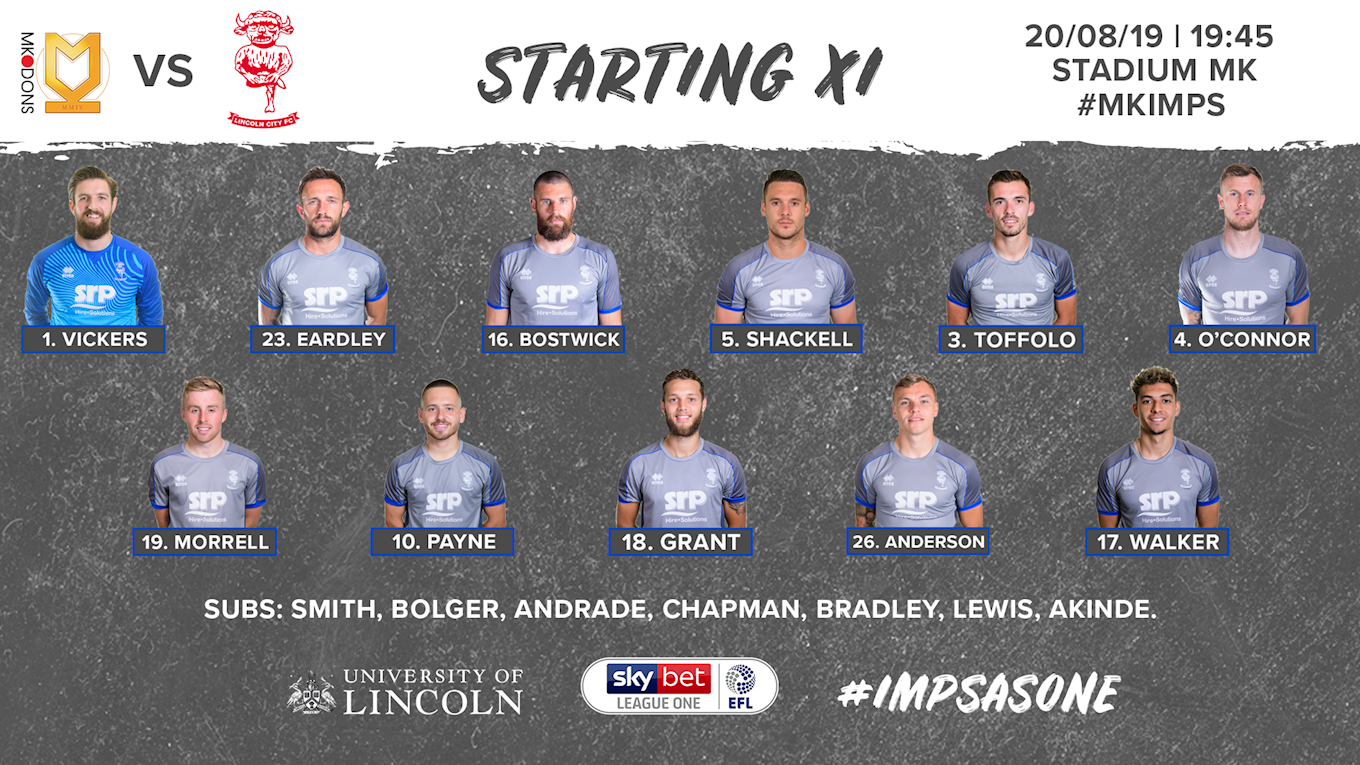 The home side broke free and scored very early into the game, a neat link between Kieran Agard and Jordan Bowery freed Agard down the right and his low drilled ball into the box found Callum BRITTAIN who squeezed the ball home. The Imps, spurred on by around 1,300 travelling supporters looked to hit back quickly, pressing the home side back into their own half almost immediately but Neal Eardley’s deep centre was claimed by Lee Nichols in the MK goal. As City poured forward though the home side clearly looked to catch their vistors on the break but Jason Shackell showed all his experience to hold up the onrushing Bowery who shot into the legs of the City defender.

The travelling Imps though were soon to be off their seats, as the visitors equalised through Tyler WALKER. The striker linked with Jorge Grant before measuring a curled effort beyond the despairing dive of Nicholls and into the bottom corner of the goal for his second goal in as many games.  After the end to end early start to the game, proceeding slowed down somewhat for a prolonged period as possession exchanged hands frequently in midfield areas. However, MK took the lead for a second time somewhat fortuitously, a cross into the City box caused a little confusion before falling to Jordan Bowery who struck goalwards, but the ball ricocheted off George WILLIAMS and beyond a helpless Josh Vickers.

As is now customary, The Imps refuse to lie down and Walker was soon to be firing on target but this time Nicholls saved the shot before Jack Payne made a tremendous late run into the area to head towards goal only to see his effort blocked on its way towards the net. The Imps were close to netting in the 34th minute when Payne almost capitalised on a mistake which left him racing into the penalty area only with Nicholls to beat, but his chipped effort wasn’t to beat the MK stopper who stood big to block. Grant was the next to have a shot for the visitors, his curler was almost inch perfect but the ball skidded a hairs breadth wide of the goal. Harry Anderson was to force Nicholls into a low diving stop just before the break after the winger cut in from the right and fired on target with his left foot.

The Imps were to take the game to their hosts almost from the restart, making positive progress down the right and left without creating a chance but it showed further signs that more scoring in the game looked likely. Grant showed quick feet to get away from his marker despite appearing to be held back, he linked with Walker who returned the ball to the City number 18 who curled on target but Nicholls was to grasp possession.

Eardley hit an effort off target as he tried to support the front line and The Imps were to go close again a few minutes later when Harry Toffolo did superbly down the left to then pull the ball back to Payne who couldn’t get his shot on target.

Hiram Boateng was the first to get a shot away for MK Dons in the second half, his low effort looked to be heading for the corner but he didn’t account for Vickers diving low to his right to make a terrific stop. Next up was Nicholls again, getting in the way of an Imps’ equaliser, Grant forcing the Dons’ number one into a save from his low drive. The home side then had their defence to thank after Toffolo was the architect for the next chance, another low centre into the danger area this time was met by Michael O’Connor and his low drive looked to be heading goalwards only to see Boateng hurling himself in front of the ball to block.

With City pushing forward with increasing numbers it was leaving more space for the hosts to run into, and as a result Agard went close to putting MK Dons two goals ahead as he fired just wide. 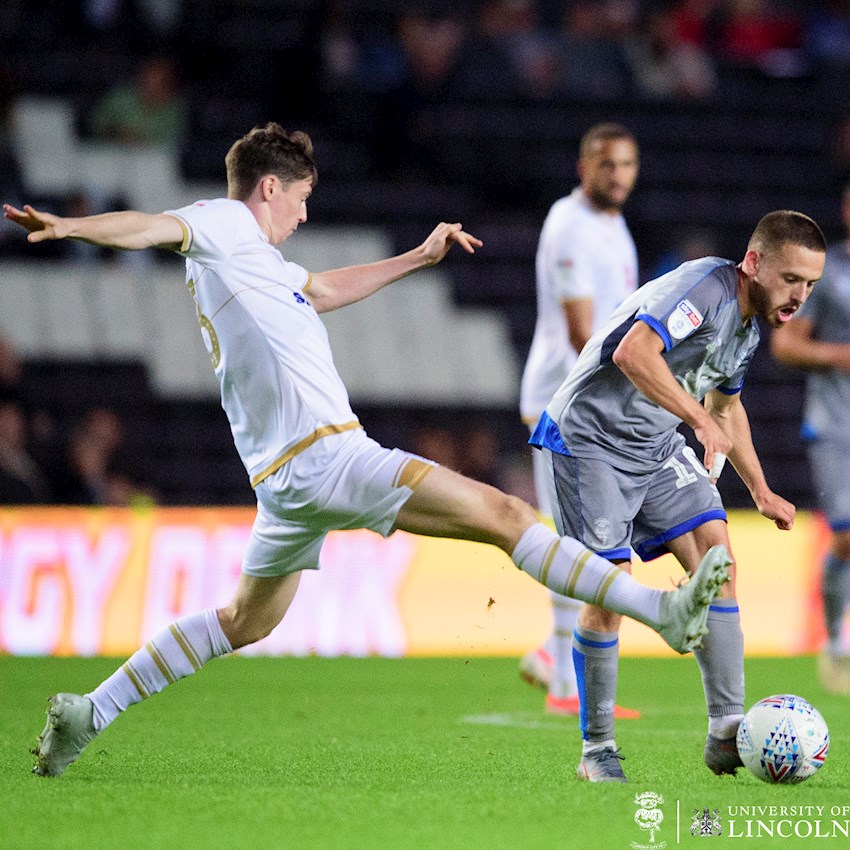 The home crowd were getting a little perturbed at the sight of City going forward again and when Payne took aim there seemed to be a sharp intake of breath which turned to sighs of relief when Nicholls saved the shot. The Imps brought on both John Akinde and Bruno Andrade going into the final twenty minutes to give fresh impetus to the attack and the pair were close to fashioning the equaliser, but the latter was snubbed out by a horde of home defenders closing him down in the area.

The Imps fans in the stand were growing in confidence that an equaliser was coming as Danny Cowley’s side were almost camped in opposing territory but the threat on the break from the home team was still evident with Bowery nodding over a corner. Andrade headed wide an Eardley centre as play reverted back into Dons’ territory but time was ticking towards the final ten minutes.  Andrade was tormenting the home defence and was close to getting his name on the scoresheet but Dean Lewington blocked his goalbound shot, and from the resulting corner Joe Morrell was so close to netting an equaliser as The Imps kept up the pressure but could only find the woodwork from a late Jason Shackell header in the dying moments of injury time. The Imps now turn their attentions to Doncaster Rovers, as a trip to the Keepmoat stadium is next on the agenda for Danny Cowley’s side in SkyBet League One.