U18 coach Ash Foyle says his side are ready to bounce back quickly after their unbeaten streak in the league came to an end. 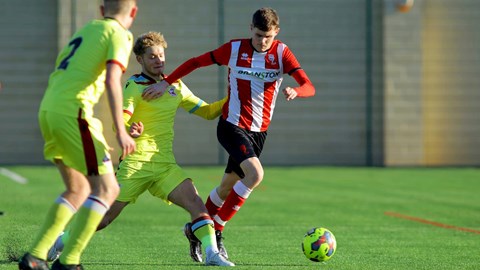 Julian Donnery converting from the spot was not enough to inspire an Imps comeback from 2-0 down, with the Iron adding a late third to add gloss to the scoreline.

Foyle said: "The beautiful thing about football is that every time you have a bad performance, there is always another game around the corner.

"The lads have done brilliantly to pick up points and good performances throughout the league and cups we've been in, so we certainly expect that tide to turn again."

The unbeaten run in the league, which had begun in November, may have ended but Foyle credited his side for their attitude along the run.

He added: "They've put in some really good performances throughout this season and been dominant and been good with the football and creating multiple chances.

"In the next one we will attack it with a bit more vigour and hunger and desire to make sure we don't have this feeling that we've got again where we know we were capable of more."