City defender Regan Poole says his side are focused on the task at hand over the remaining seven games of the season despite Saturday’s frustrating result at Shrewsbury. 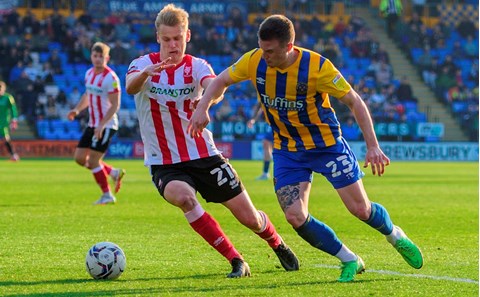 A number of injuries throughout the game, particularly in defence, meant Michael Appleton was forced into a number of changes to the backline. Poole says these reshuffles epitomise the season, but the squad will move on from the result quickly.

The Welshman said: “We had four or five back fours and that’s been the story of our season so far. With injuries, we’ve been so unlucky – we’re really disappointed because it should have been a 0-0 draw all over. We’d have taken the clean sheet and moved onto Saturday, but that wasn’t the case.

“It’s been a tough season and this summed it up. We had some many different players in different positions throughout the game, but we need to move on to Charlton as fast as possible now.”

On a personal level Poole said he has been pleased with his performances and is hopeful his recent injury, which sidelined him at Rotherham, will hold off until the end of the season.

He added: “I was out in pre-season with the same ankle injury, I picked up that knock again at Wimbledon early doors and played through it, but it swelled up a lot after the game. I’m getting it strapped up now and hoping it will last through to the end of the season.

“I’m quite happy with my season on a personal level – I would like to be further up the table but that isn’t the case. We’ve got a job to do and my whole focus is on that over the remaining seven games this season - we need as many points as we can get.”