Michael Appleton felt City were beaten by the best side in the division on Tuesday night. 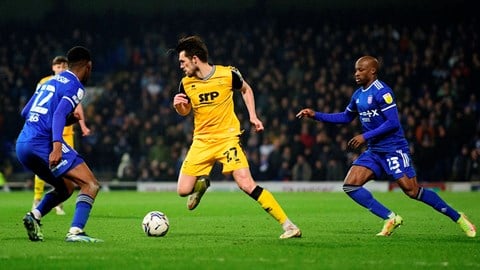 The 2-0 loss at Ipswich Town extended the home side’s unbeaten run to eight games and continued their remarkable run of form under Kieran McKenna.

Appleton said: “They’re in a really good vain of form. You can see why they’ve only conceded one in seven going into the game and why they score a lot of goals, Bersant Celina and Sone Aluko were unplayable at times.

“For me they’re comfortably the best side in this league, and sometimes you’ve got to hold your hands up and say we’ve come up against a side in a better place than us. Having said that we had moments where players got into great positions but didn’t quite get their shots off, and when you do that you’ll get punished.”

Appleton, McKenna and both sets of players in a photo before the match to show solidarity with those suffering during the Russian invasion of Ukraine, before everyone in the ground joined in a moment of applause to show solidarity.

He added: “When you see the scenes and read the stories it is scary and a reminder there are bigger things going on in the world than football. These people have families,  have kids, and it sobers you pretty quickly.”