Morgan Whittaker is hoping his loan spell at the Imps will allow him to follow in the footsteps of Brennan Johnson and Morgan Rogers. 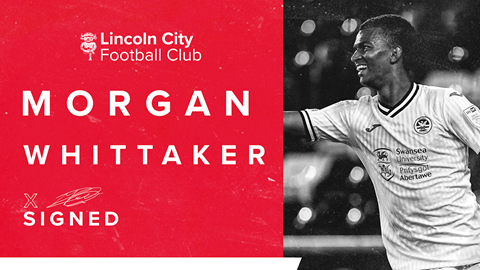 Those two are now established Championship players, having been helped along their way with impressive loan spells in Lincolnshire last season.

Whittaker hopes for a similar boost to his career after joining the club on loan from Swansea City until the end of the season.

“You can see the progress made with the likes of Brennan and Morgan here last season,” said Morgan.

“They are now established at Nottingham Forest and Bournemouth respectively, they have said good things about the club and it feels like the right move for me.

“I also spoke to Josh Griffiths who said good things about the players and fans who can be really loud, especially the 617 Squadron over in the far corner, and that it’d be a great place for me to come to.”

Whittaker’s move to Lincolnshire has been a long time in the making, having been agreed in the summer only for his parent club to opt against letting him leave in the final stages of the transfer window.

“I’ve had four months to get myself ready for this moment, and now it’s happening I can’t wait to get started,” added Morgan.

“Training this week has been good and the players, manager and coaching staff have been really welcoming. It feels like I’ve been here a long time even though it’s only been a few days.”

Morgan Whittaker will be go straight into City's squad for Saturday's visit of Oxford United. Click here to secure your spot at either game now via our online ticketing website.