Michael Appleton hailed his side's battling performance which resulted in three points for the Imps following a 2-1 victory at Plymouth Argyle.

City overturned a 1-0 deficit in the second half, displaying a character that Appleton described as unsurprising.

He said: “To play as well as we did  and get the reward in the final minute is very nice,” the boss said. 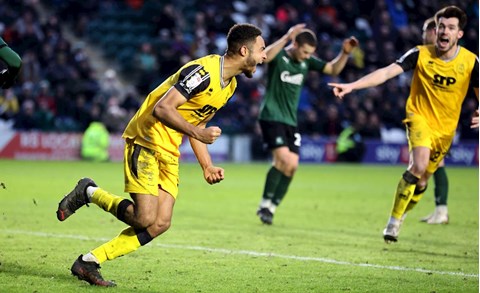 “It would have been really frustrating not to win the game because of the amount of really good chances we had.

“We had to deal with their spell for around 10 minutes with crosses, balls into the box, and the crowd getting behind them, but when we came through that we had a purpose.

“It was a really good performance and I’m not surprised about it because it’s what we’ve been doing on a regular basis and now we must keep on the front foot and keep at it."

In a battling team performance Sam Long, who made his league debut, and John Marquis, who made his first Imps start, were among several names to stand out.

Appleton said: “John’s got good quality and has been doing it at this level for many years.

“He’s got a good personality, he’s great with the younger lads in the dressing room, but his work rate as well is second to none. He is a focal point for us, the goals he scores are like the one he grabbed, and they are the types of chances we can score time and time again.

"Sam looked really assured, you wouldn’t think it was his league debut. He’ll be our goalkeeper, whether it’s next season or the one after, he’s going to be a top player.”

The manager was also keen to acknowledge the contribution made by the 339 Imps who made the trip to Devon.

He added: “It’s been a really good day for the club. The fans have come a long way and we’re appreciative. It’s great they got the opportunity to celebrate with the lads in front of the away end when Max scored the winner.”

Michael Appleton: I was delighted how we stood up to it


City boss Michael Appleton was proud of his young Imps side as they picked up three points on the road with a 2-1 win over Burton Albion.


Michael Appleton’s side travel to Rochdale this weekend in Sky Bet League One action, Imps supporters can watch the game LIVE on WeAreImps iFollow