Imps manager Michael Appleton says his players will learn from the challenges they have faced this season. 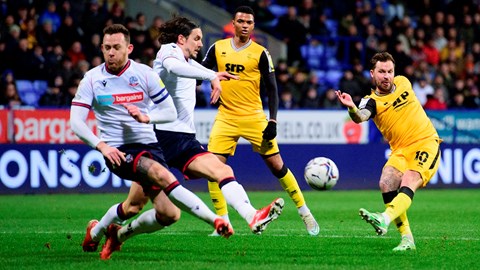 Individual errors cost City dear at Bolton on Tuesday night as a strong first-half performance was undone in the second period.

Appleton said: “The young players have to learn and go through tough experiences so that next time, in that moment, they do better.

“We know what we need to pick up to make sure we stay where we are in the table – that will happen, but we need to stand up and make it happen.”

While leaving the University of Bolton Stadium frustrated by the result, the boss felt there are positives he can take from the first-half performance.

He added: “It’s good to see Tom Hopper back out there, he’s really close to being able to start which is really pleasing, and with Joe Walsh back from suspension there’s enough to see us through games.

“The frustrating thing is the good first half gets forgotten because we lost to a team who are on a good run. We’ll look back in a couple of days’ time when the emotions are less raw but, ultimately, what happens in both boxes counts and we’ve missed opportunities and not done enough to get blocks in or shots or stop crosses.”