Oisin Gallagher is pleased with the hard work shown from his team-mates during City U18’s FA Youth Cup run. 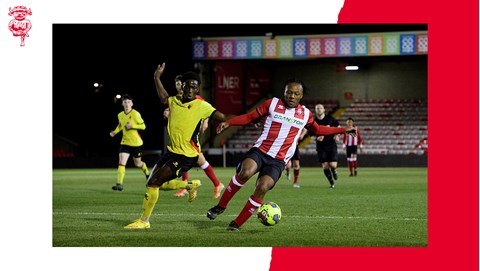 The young Imps beat Doncaster Rovers and Tranmere Rovers before falling to defeat in the third round on Monday evening against Watford.

He said: “Ultimately it came down to the small details, where we failed to take our chances and not defending the net properly. I think we played well for the first 60 minutes and showed a bit of heart.

“It was good to get a couple of wins in this season’s FA Youth Cup. Obviously we are disappointed that our run has come to an end but we are now looking forward to the next few weeks.”

Gallagher is taking confidence from the cup run and will be using it as motivation to attack the next set of fixtures in 2023 as he continues his development.

He added: “We have some B team fixtures nearly every week up until the end of January and we are excited for those.

“It is a different challenge with the under 18s but I will try and play as many minutes as possible and see where that takes me.”

A silver membership is the most cost-effective way to watch City this season - purchase yours HERE.