After helping City through to round two of the Carabao Cup with a goal and an assist, Ted Bishop believes there is a winning culture being created at the club. 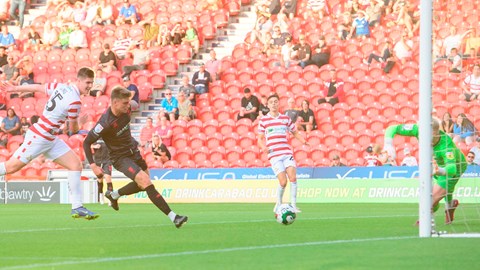 The 26-year-old midfielder got off the mark for the season as the Imps saw off Doncaster Rovers at the Eco-Power Stadium.

He said: “There is a bit of relief to get the first win of the season. You need that winning mentality in the squad if you are going to have success.

“It was important to put in a good performance and get through to the next round of cup, so we are all happy that we have done that.

“We are looking to push on and hopefully win again on Saturday.”

Ted has insisted that the partnership between players is forming as the Imps extended their unbeaten run to three matches following victory in South Yorkshire.

He added: “We have done a lot of work in training and I that has shown in the last couple of games.

“Anthony Scully and I have got a really good understanding of each other down the left side and I enjoy playing with him.

“Max Sanders has also come into the team and we are building partnerships all over the pitch now which is nice.”

City return to action in Sky Bet League One at the LNER Stadium this Saturday against Forest Green Rovers - secure your seat here.