Lincoln City manager Michael Appleton felt his side deserved more from Good Friday’s fixture against Portsmouth after battling back from a two-goal deficit. 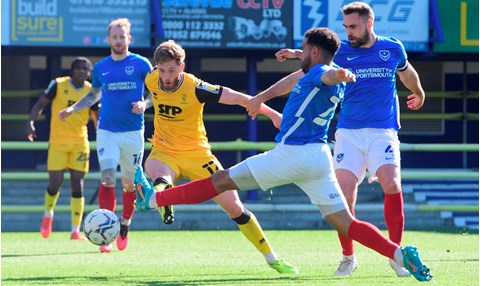 Pompey found a late winner to subject City to defeat, but Appleton said he was proud of the character and quality shown by his squad.

He said: "We were value for at least a point today. I thought we were very comfortable in the first half and had the better moments in the game. I fully expected us to stick at it and keep going for it and I the players knew there were opportunities in the game. For them to get their reward by bringing it back to 2-2 and then not getting any points is frustrating.

“I thought on the whole we were good, certainly in the transition, and caused lots of problems. I think their goalkeeper getting Man of the Match tells you everything you need to know about how we played.

Appleton was also keen to praise the performance of Ben House and the character of Jordan Wright.

He added: “Ben’s been great in training for the past four or five weeks, I had a few minutes with him at the hotel before we left and told him how unlucky he was to not be starting. We’re still trying to work out what his best position is because he’s not played too much football for us, but he’s comfortable dealing and running with the ball and we’re delighted he got the goal.

“Jordan has been good for us since he came in and played ever so well, having big moments in games along the way. He’ll bounce back because he’s got a good character and personality about him and he can handle adversity. The good thing from his point of view is there is another game around the corner where he gets an opportunity to address it."

City are back in action after the weekend as they host Cheltenham Town on Easter Monday at the LNER Stadium. Tickets are still available and can be purchased HERE.