Michael Appleton believes the younger players in his squad are showing their character after stepping up during the club’s injury problems.

A youthful Imps squad - Ted Bishop was the oldest player in the line-up at 25 - were 2-1 victors at Burton Albion on Saturday and will head to Morecambe in confident mood. 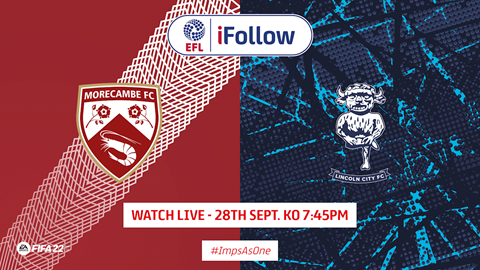 Appleton said: “With the amount of experienced players we had missing, the character they showed to play as well as they did and to deal with crosses and balls into the box that they had to late in the game was pleasing. The message to the player was we know we have a lot of senior players out but it’s an opportunity for young players to step up and stake a claim - if they take opportunities they will stay in the team.

“You need tests throughout the season and you need to come through for them to have belief and confidence they are capable of doing that. We had something similar against Rotherham, but with a few more experienced players int he team that night, so for them to come through it gives them a lot of strength and belief.”

Appleton has been impressed by the start Morecambe have made after promotion to the third tier for the first time in their history.

He added: “They’ve done great, as the majority of teams that have been promoted have, they have a bit of momentum still behind them.

“I played with their manager Stephen Robinson at Preston and they’ve got a striker in form in Cole Stockton who is scoring for fun, they’re going to be dangerous and hard to beat so we need to be mindful of that.”

The win sets City up perfectly for Tuesday night's trip to Morecambe. Can't get to the game? Fans anywhere in the world, including in the UK & Ireland, can watch live via an iFollow Imps match pass - click here to see the options where you are.