The Imps stretched their unbeaten run to three games despite being held by Shrewsbury Town at LNER Stadium.

Conor McGrandles’ second goal of the season had put the Imps ahead, but Luke Leahy’s leveller ensured a share of the spoils for the visitors.

Regan Poole did have the ball in the back of the net as the home side pushed for a winner, but he was ruled to be offside at the time and the Imps had to settle for a point.

Michael Appleton made one change, opting for the more physical presence of Adam Jackson ahead of TJ Eyoma alongside Lewis Montsma at centre-back.

Dan Nlundulu, confident after his starring role at Wigan in midweek, pressed high and created his first chance with just three minutes on the clock.

He closed down an attempted clearance to win the ball and break though on goal, his low finish looked set for the bottom-left corner but was tipped away well by Marko Marosi.

That was the high point of a particularly stop-start opening to the game, with the visitors knowing to slow down the game to disrupt the in-form Imps.

There were 20 minutes on the clock by the time the next clear chance came, as Lewis Fiorni chipped a cross in which found Nlundulu. He won the ball but his flicked header went wide.

That prompted a little flurry of action, with Ted Bishop’s curling effort on goal a few moments later comfortable for Marosi.

A long throw from George Nurse created the visitors’ best chance up to that point, with the overhead kick that followed lacking power or positioning to trouble Josh Griffiths.

There was a lengthy break in play after 32 minutes, with Jackson appearing to head the back of Montsma’s head while challenging for a ball.

After receiving treatment on the pitch, he was carried off on a stretcher to applause from all four sections of the stadium.

That meant an enforced return to the starting line-up from Tuesday, with Eyoma coming off the bench to partner Montsma in the centre of defence. This was a concussion sub ever utilised by the Imps.

The stadium clock had rolled over to 40 by the time play restarted, but those present saw close to another 20 minutes played by the time the half-time break finally came - with 11 minutes on the time added on board held up by fourth official Andrew Hendley.

Given how few stand-out moments had come before, it was amazing how many came after. Not least one minute into the 11 added on when Matthew Pennington had the ball in the back of the net for the visitors - only for referee Robert Madley to rule the effort for a foul in the build-up.

The visitors had some good pressure, with Eyoma well-placed to head a Udoh cross behind and Pennington sending a header straight at Griffiths.

The last chance of the half fell the way of the Imps, with Bishop flashing a header wide from Maguire’s cross - with the delivery taking a wicked bounce just in front of him.

Appleton made his second change of the game at the break, with Hakeeb Adelakun coming on to replace Bishop in what was a second concussion substitution of the match.

The visitors drew level five minutes after the restart, with Leahy heading home from another Nurse long throw-in.

And they threatened to go ahead after 56 minutes when Shaun Whalley dummied this way and that before trying a shot from outside the area - Griffiths had it covered but the strength in the shot meant he had to palm it over for a corner.

The Imps’ first chance of the second period came after 61 minutes after Adelakun sent Nlundulu free down the right. He got past a Shrews defender but went for power with his shot and could not keep it down.

Both teams were looking for a winner as the game entered the final stages. Adelakun sent a first-time effort wide after Maguire’s ball over, before the No.10 and Max Sanders saw shots blocked.

Leahy, who had been at the centre of everything good for the visitors, sent a low effort wide with just over 10 minutes to go - but Griffiths had it covered.

City did have the ball in the back of the net after 83 minutes, but Poole’s effort was ruled out as he was offside.

The final chances of the match all fell the way of the home side, but they could to find a way through.

Marosi had to be alert to stop Nlundulu’s effort, then he was rescued by a man on the line to head away when Adelakun had him beaten with a curling effort the a set-piece was not fully cleared.


Michael Appleton has been given more food for thought after Max Sanders impressed in his substitute appearance against Shrewsbury Town on Saturday. 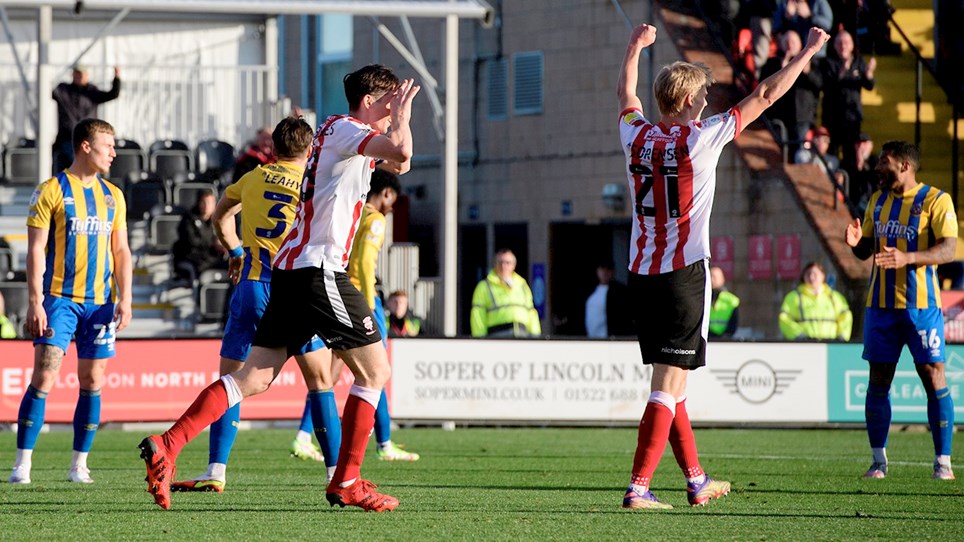 
Conor McGrandles is eager to kick-on with the rest of season after his second goal of the campaign helped continue City's good run. 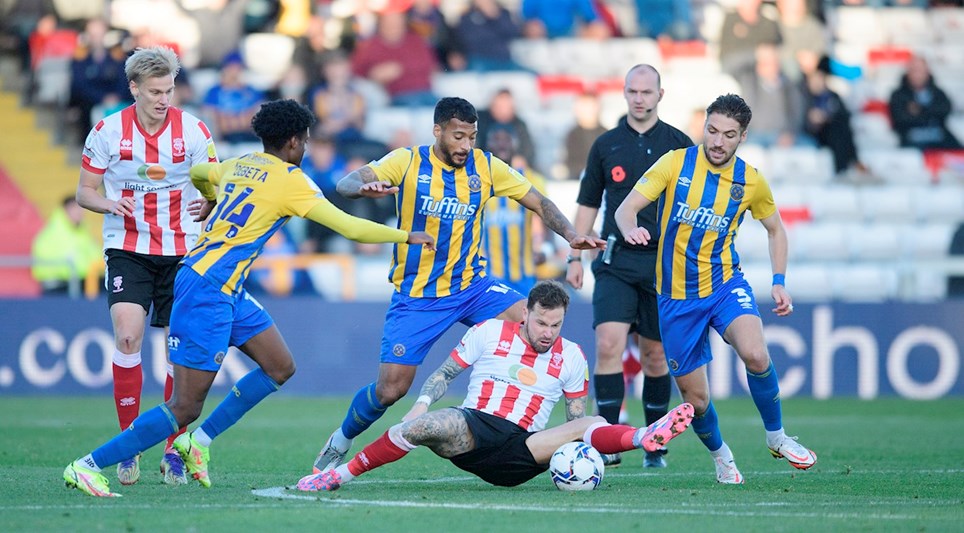 
Conor McGrandles' second goal of the season helped the Imps to a point against Shrewsbury Town.


More than 8,000 supporters were at the LNER Stadium to soak up the big match atmosphere as the Imps took on Shrewsbury Town.