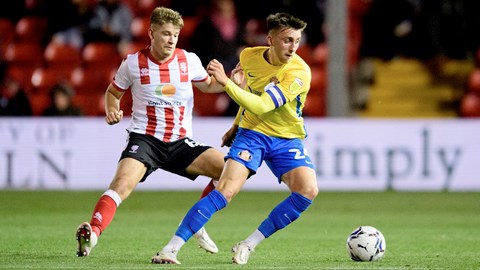 Walsh played 45 minutes against the Black Cats in what was his first appearance since the League One play-off final in May.

Appleton said: “Joe Walsh getting 45 minutes and Chris Maguire getting 65 was really pleasing in terms of the games ahead of us.

“We’re getting to see glimpses of what Chris is about, though we need him to play five or six games on the bounce before we see the true ability he has.

“It’s just good to see him get minutes under his belt and feeling fine with no effect, the same with Walshy - they’ve staked their claim to be involved now which is good.”

With Saturday’s trip to Wigan Athletic postponed due to international call-ups, the manager is looking forward to a full week on the training ground ahead of the visit of Charlton Athletic on Saturday October 16.

He added: “In the last international break we had a really good training week leading into the Cambridge game which we won, it is an opportunity to give the players a few days to rest and recover.

“We want to make sure we look after the players as well as we can over the coming days and next week will be a really important one.”

The Imps are back in action at the LNER Stadium when Charlton Athletic visit on Saturday 16 October - click here to secure your spot at the game.