Michael Appleton hailed the character of his side after they twice battled from behind to earn a point against high-flying Plymouth Argyle. 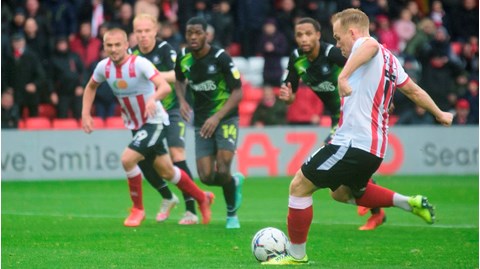 Lasse Sorensen and Anthony Scully’s strikes ensured a share of the spoils, and Appleton was pleased with the way his side reacted to falling behind on both occasions.

He said: “They were very good on the counter-attack in the first half and created two or three good chances, but in the second half we had them camped in their half.

“They didn’t take their chances in the first half which gave us an opportunity to show a bit of spirit, which I thought we did do and we were in control in that second half. Their goal burst our bubble a bit when we were in the ascendency, but to regroup and go again to find a way of getting a deserved point was really pleasing.”

Appleton felt his side reacted well to the midweek loss at Morecambe.

He added: “With the ball for 60 minutes at Morecambe we were really good but let the disappointment get the better of us after their second goal, whereas this performance was not as good with the ball but the spirit was there.

Tickets for Tuesday's Papa John's Trophy game against Sunderland are available now. Make sure you're there to back the lads as they look to secure passage to the knockout stages of the competition - click here to buy tickets.