The home side started sharply, forcing Trialist A into a smart save at his near post in the third minute, followed by a quick succession of corners, keeping the pressure on the young Imps. City were able to break for their first chance of the evening, with Billy Brooks finding Freddie Draper, who was able to drop his shoulder and work an angle to test the Gainsborough keeper from 18 yards.

On the 12 minute mark, Gainsborough pounced upon an error from Trialist D, with a clever through ball putting Curtis Morrison through on goal, before he dragged the shot wide to the keepers left.

Just before 20 minutes gone, Toby Gould burst down the left hand side for the home side before cutting in onto his right foot on the edge of box, but failing to find the target with his effort.

A physical 15 minutes followed, with the Lincoln XI starting to dictate the play, despite neither team being able to forge any clear cut chances.

Following some crisp one touch passing and a smart flick from Curtis Morrison, Gainsborough found themselves through on goal. The away side failed to capitalise on their opportunity, blazing the shot high and wide to the keepers right. Shortly after, following a miscommunication at the back City lost the ball on their 18 yard box, the ball fell to Alex Wollerton who struck the ball a couple of feet wide of City’s goal.

An even first half ended 0-0, with neither team able to capitalise on opportunities in a well fought physical battle.

Just as the second half began Kyrell Wheatley looped the ball forwards towards Mekhi Angol before it dropped at the feet of Freddie Draper in front of goal. The Imps number nine attempted to round the keeper and was forced backwards before attempting to chip the keeper, but the ball drifted safely into the keepers arms.

On the 48th minute, a low driven ball deflected and dropped in the Imps’ box following pressure from the home side and Curtis Morrison was able to capitalise, striking the ball low and hard into the bottom left corner.

Just after 55 minutes, Josh Simpson fed the ball through to Trialist F, who rounded one Gainsborough defender before failing to find Freddie Draper across the goal with Lewis Carr intervening and sending the ball just wide of the post.

After a clever ball into the box, Mekhi Angol found himself 8 yards from goal, the Imps winger pulled off a nice turn around the defender before forcing a stop from the Gainsborough goalkeeper.

On the 64th minute Jovon Makama, Tayo Tucker and Nathan Kabeya made their entrance with Billy Brooks and Freddie Draper making way.

Following some direct play from the home side Curtis Morrison picked up the ball on the right hand side of the box, the forward pulled the ball back for Alex Wollerton who forced a stop out of the Imps keeper at his near post.

71 minutes in, the home side made it 2-0 following a nice long pass from the keeper to the left wing where the ball was set inside to the edge of the 18 yard box and slotted low to the keepers right.

The 83rd minute saw Harry Dale and Darryl Powell substituted on for the Imps.

Just one minute later the Imps whipped a ball across the box from the left-hand side, which Kyrell Wheatley attacked with force, beating his man to head the ball in at the back post making it 2-1. 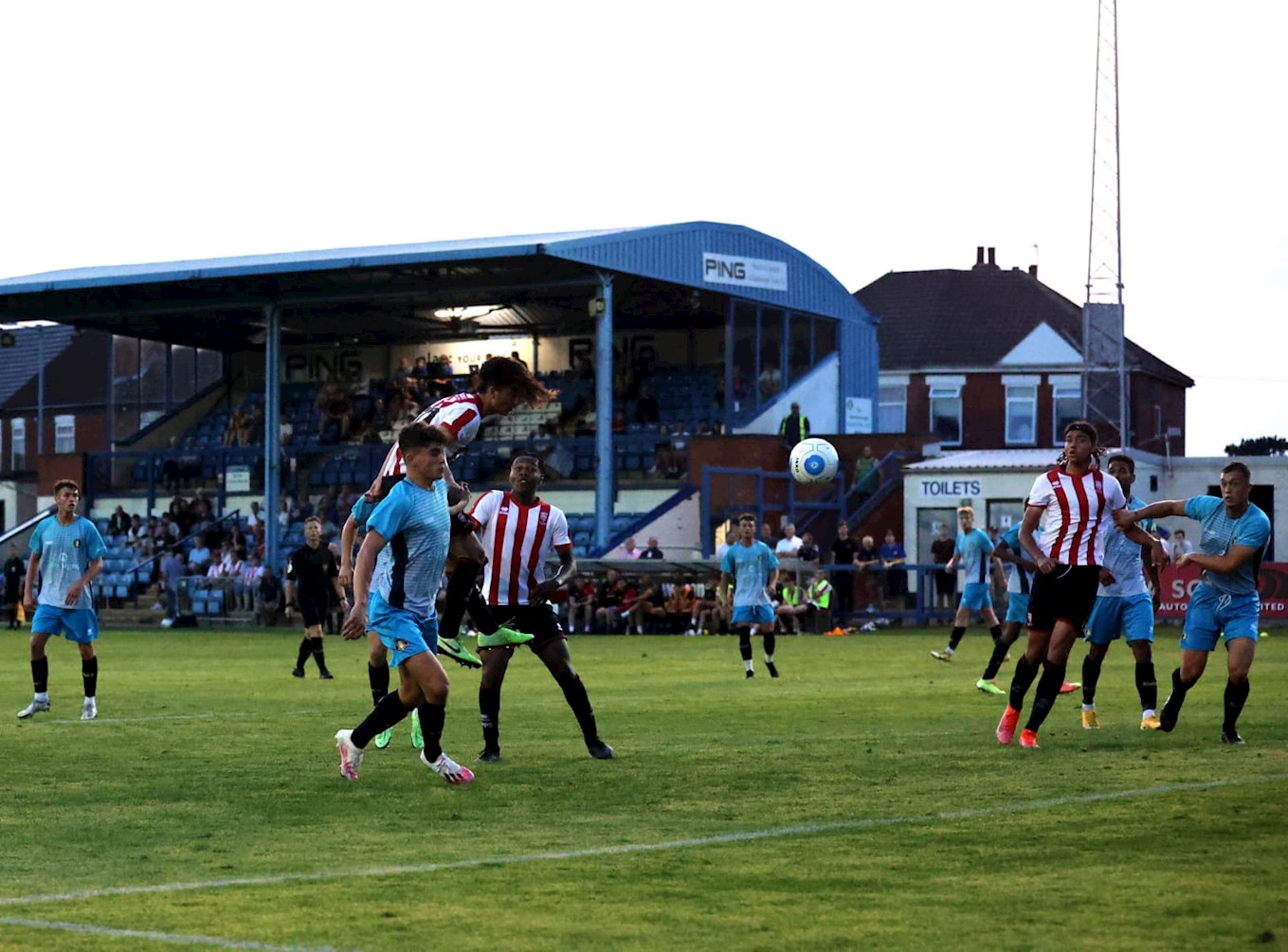 The young Imps’ late goal however turned out to be just a consolation, as Gainsborough Trinity claimed the win in a good physical test for a team consisting of scholars and trialists.