Sam Long has credited coach Steve Croudson with his development after signing a new long-term contract with the Imps which puts him one step closer to his dream of being the club's first-choice goalkeeper. 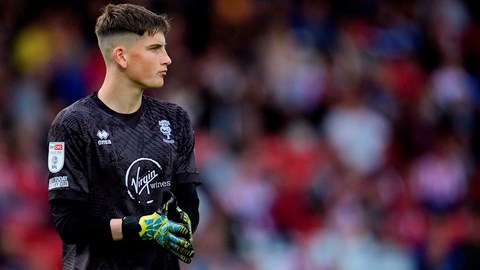 Long has penned a deal which keeps him at the Imps until the summer of 2025, continuing an impressive few years at the club after initially joining as a scholar.

He said: "I've been here two and a half years so the new deal reflects the progress I've made working with goalkeeper coach Steve Croudson and the other coaches along the way.

"Steve has really helped my progression and in the year and a half I've been working with him I've come a long way in terms of what I need to do to be a professional goalkeeper and play for Lincoln."

Long is clearly highly-rated at City, with the club's coaching staff seeing him as having the attributes to become a regular in the starting line-up. The 19-year-old, whom has been a regular in matchday squads for the past two seasons and has made five starts this term, embraces that aspiration.

He added: "I want to be Lincoln's number one goalkeeper, and the best way I can do that is by working hard every day with Steve.

"I will put everything in every day on and off the pitch, being as professional as I can. The aim is to be Lincoln City's number one but there's a lot of things I need to do to get there."

The Imps are back in action next Saturday when Oxford United visit the LNER Stadium. Click here to secure your place at the game.