Sam Long is beginning to feel at home as a member of the Imps' first-team squad. 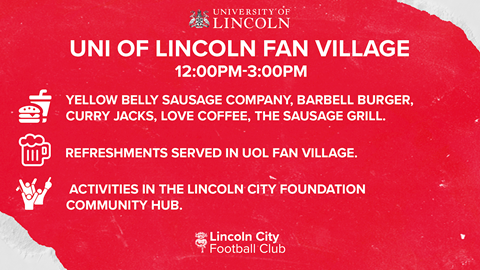 The 19-year-old goalkeeper has made four senior starts this season after graduating from the club's Academy.

"I'm a lot more confident with the group as before that I hadn't played a competitive game with them.

"I'd been feeling good around them in training every day, but to actually play and contribute was a great feeling. I hope the lads have built confidence in me as well."

Sam returned from a loan at Gainsborough Trinity to play in the first round of the Emirates FA Cup, with West Bromwich Albion not giving Josh Griffith permission to play.

He was named in the official Team of the First Round and claimed his second senior clean sheet.

He added: "Those two clean sheets helped me a lot. I was delighted to be in the Team of the First Round and my parents were very proud.

"Hopefully I can put in a similar performance and help us get through to the next round where the Premier League teams get involved."

Sam Long is the feature interview in Saturday's matchday programme, which is available from sellers around the stadium as well as from the ticket office, with fans able to pay by cash or card. If you cannot get to the match then order your copy online now.