Michael Appleton felt his side should have put MK Dons out of reach on Boxing Day long before a freak goal sealed all three points for the visitors. 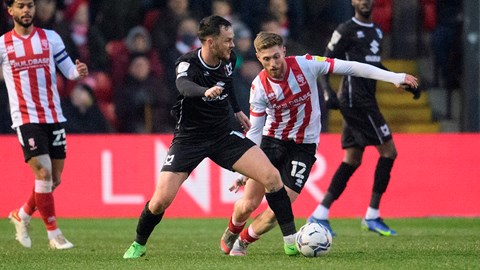 City were 2-0 up at the break and created chances to get a third goal, but the visitors drew level before a wayward shot from Scott Twine ricocheted off Regan Poole and into the net to give them all three points.

Appleton said: “It sums up where we’re at right now - conceding a winner deep into time added on from a shot that was probably going to go out for a throw-in or corner.

“It’s deflating because there were a lot of positives from the game, we created numerous chances and played some good football against a decent side. We just didn’t make them work hard enough for the goals they scored.”

The Imps boss was particularly pleased with the first-half display which saw his side start quickly and go 2-0 up inside the opening eight minutes.

He added: “The pressing from the front players was really good and set the platform for the first half performance.

“There’s a lot of good things about the game people will forget about because of what happened at the end.

“I know goals and results are the most important part, but there were things we could have done before that point which would have affected that - going and getting the third or fourth goals early doors, which has cost us.

“If you lose in a game and haven’t played well or the players were flat you have to accept it, but that wasn’t the case. We went toe to toe with them, but have allowed them to get their goals too easily."