Penalties decided the first EFL Trophy Group E game for The Imps and Scunthorpe United this season as the sides couldn’t be separated after 90 minutes.

It was The Imps who kept their nerve, winning the shoot out 4-2 with James Jones hitting home the crucial strike after the visitors had hit the upright with their first effort before Alex Palmer saved from Myles Hippolyte.

The Iron edged themselves in front late in the first half through Tyler Cordner but Neil Cox’s side succumbed to pressure from City in the second half and Harry Anderson bundled the equaliser over the line from close range forcing the shoot out.

It was The Imps who kept their nerve, winning the shoot out 4-2 with James Jones hitting home the crucial strike after the visitors had hit the upright before Alex Palmer saved from Myles Hippolyte.

The visitors had the first sighter on goal, Aaron Jarvis testing the concentration of Alex Palmer, as the Scunthorpe number 19 hit a low swerving effort on target which The Imps’ stopper did well to watch the flight of the ball and save. City were having more of the ball, but The Iron were looking dangerous on the break.

City’s number 19, Callum Morton tried to go one better than his opposite number moments later as he latched onto a cross from the overlapping Max Melbourne, but the striker couldn’t quite divert his effort on target. There was no shortage of attacking intent from both sides, as the sun went down when Scunthorpe’s Andy Dales looked to light up the stadium running almost the length of the pitch, but at the crucial moment his shot from 20 yards was snatched well wide.

The Imps were growing in confidence holding possession for longer periods but not quite able to make the breakthrough as the visitors were just in the way at the last on a number of occasions just denying Morton and Remy Howarth as he tried to make room for a shot.  Palmer was right down the barrel of a shot from Devarn Green as the visitors continued to be very direct when in possession, trying to run through the heart of the City defence.

Remy Howarth was becoming more of an influence going forward for The Imps and he forced Rory Watson into a save, The Iron ‘keeper having to get behind the curled effort to keep it out. Scunthorpe’s stopper was then called upon to clutch an Alex Bradley corner under his crossbar.

However, before the break the visitors got their noses in front Dales pinging in a corner for Tyler CORDNER to finish at the second attempt. Scunthorpe were trying to stretch their advantage ahead of the break, but The Imps stood firm and pushed for the leveller, Alex Bradley smashing a low cross right through the six-yard box and it took a nick off a defender but somehow squirmed beyond everyone.

The Iron started the second half quickly but City were closest to scoring the second goal of the game. Harry Anderson used his pace to get away down the right and slide in a low cross to the near post where Morton slid in and got a touch on the ball but somehow it stayed out of the goal.

It was a disjointed half with little in terms of chances at either end as defences were on top, The Imps made a couple of changes, introducing Jorge Grant and James Jones into the game to add a different dimension to the attacking options.  The switch in personnel did add more impetus for The Imps, Howarth down the right bamboozled his marker down the left flank and dinked a cross to the back post where Anderson was looking to ghost in but despite twice getting to the ball his effort was blocked.

City were pressing higher, forcing their opponents onto the back foot but the Iron defence were still throwing themselves in front of crosses as they continued to frustrate Michael Appleton’s side.  Anthony Scully came on as City made their final change of the evening with quarter of an hour remaining as the ball was almost camped inside the Scunthorpe half, but Watson was in the way again for the visitors as he clutched a Harry Anderson header tohis chest following good work from Howarth down the left.

Scunthorpe’s ‘keeper was again called into action as he denied Scully but before he could think about that, Watson was picking the ball out of the net. Grant found space inside the area to square the ball across the box and ANDERSON raced into the box with his marker and the ball was bundled into the goal.

The game was firmly in the hands of The Imps as full time and the prospect of penalties crept ever closer, Scully almost finding space to shoot after wriggling between two defenders before being just blocked off. Anderson then fired in a low cross which deflected up in the air and across the goal line almost, but agonisingly no one could get there to pop it home as the ball drifted beyond the face of the goal.  So we went to penalties.

The Imps won 4-2 on penalties

Palmer: Winning is always the goal


Alex Palmer was delighted after playing his part in the penalty shoot-out which brought The Imps victory this evening against Scunthorpe United.

Pre season victory for The Imps


The Imps tasted victory this evening at LNER Stadium after a confident performance against Scunthorpe United. 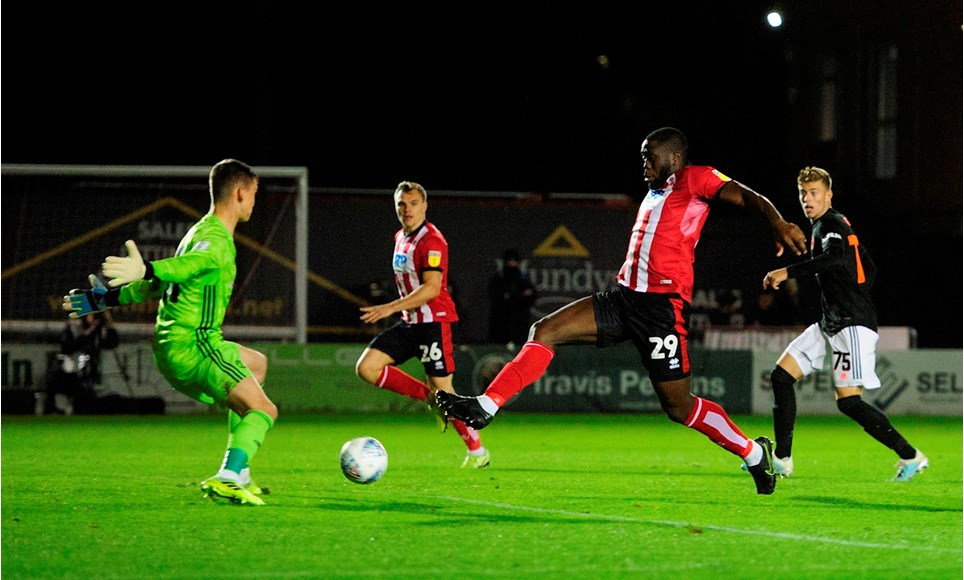