Almost 9,000 fans witnessed the Imps pick up their second set of three points this week. Tyreece John-Jules was the hero on the day scoring the only goal as Lincoln beat Blackpool 1-0 at LNER Stadium.

The Imps made three changes to their starting line up from their last game with Max Melbourne making his first league start for the Imps.

Tyreece John-Jules returned to the starting line-up after missing out on Tuesday’s 5-1 win over Bolton Wanderers. January arrival Tayo Edun was given his debut in front of the LNER Stadium replacing Conor Coventry. 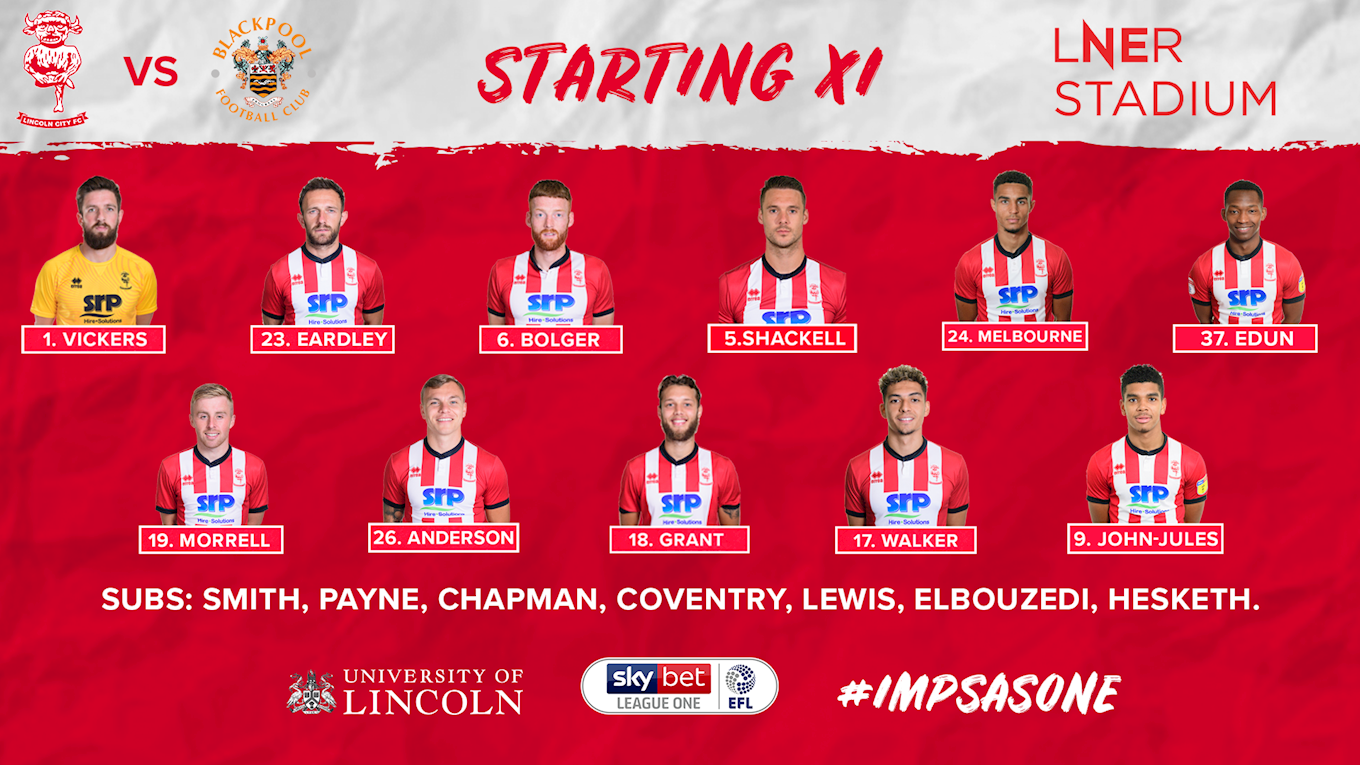 The visiting side started brightly with Liam Feeney providing a cross for Nathan Delfouneso inside the Imps goals. However, the Blackpool attacker’s header was sent wide causing no problems for Josh Vickers.

The Imps soon had their first chance of an attack with a free-kick won on the edge of the area by Tyler Walker. Jorge Grant was the man with the delivery, but it was slightly too much for Jason Shackell to meet at the back post.

Lincoln were on the front foot again, this time with some impressive passing football. Walker and Tyreece John-Jules linked up well before finding Joe Morrell in midfield who played an impressive pass to Grant. The midfielder then knocked a backheeled pass to Max Melbourne who found Morrell. The Welsh international’s delivery into the area almost came off however, Blackpool’s Ben Heneghan beat Walker to the header before clearing to safety.

The game continued to go from end to end with Simon Grayson’s side almost coming close from a corner. The Seasiders delivered the ball into the City area, beyond Vickers, however the Imps were saved by the back post before it was cleared to safety.

Grant continued to create the attacking scenarios for Lincoln picking up the ball in the middle of the park before playing it to Morrell. City’s number 19 then found Neal Eardley who was racing forward, the former Blackpool man was keen to score against his former club as he attempted to fire one home from outside the area. However, Eardley’s shot went wide causing no problems for Mark Howard.

Melbourne made an impressive start on his full Imps league debut winning City a penalty. The young left-back played a simple one-two with Grant before being fouled in the area. Walker stepped up, driving his shot low and hard but Blackpool shot-stopper Howard managed to get a strong glove to the ball keeping the scores at 0-0.

Despite the Imps earlier miss they continued to have the attacking possession. Harry Anderson and Eardley this time creating the chance for Lincoln. The right-back played through Anderson who beat his man before putting a cross into the Blackpool area which was cleared quickly.

Lincoln kept trying to take the lead. Anderson providing the cross for Tyreece John-Jules who rushed his shot after being under pressure Curtis Tilt. The striker came close moments later forcing Howard to pull off an impressive save from his header after Eardley played a superb delivery from the right side.

The Imps finished the half with a corner won by Anderson on the right side. Grant fired in his delivery however Armand Gnaduillet quickly cleared to safety. Lincoln continued to try and squeeze in a goal before halftime but no real opportunities arouse for Michael Appleton’s side before the referee blew up for the break.

Lincoln started the second half with an attacking threat. Tayo Edun did well in midfield to pick the ball up from a sloppy Blackpool pass. The new City arrival ran from 30-yards out into the area before trying to slot a pass-through to Walker, however, the visiting goalkeeper was quick off his line to collect the ball.

With Blackpool not causing any threat to Lincoln’s goal in the opening stages of the second half, the Imps continued to attack. This time Morrell picked up the ball in the centre of the field, playing a great pass to the overlapping Melbourne on the left. The full-back’s cross was blocked and went out for a corner which led to no goal-scoring opportunity for the Imps.

The visiting side made their first change of the game on the hour mark bringing new signing Gary Madine on for Gnanduillet as well as replacing Liam Feeney with Joe Nuttall. Melbourne was the first player in the book, picking up a yellow card for a foul on Grant Ward.

JOHN-JULES opened his account for the Imps with a simple well-placed finish following a quick attack from Lincoln. The youngster made his run perfectly allowing Walker to play through a great pass before calmly finishing. City's number nine became the side’s 13th different league goalscorer this season.

John-Jules was involved in the action moments later, this time up the other end of the pitch when Blackpool came close from a corner. The striker blocked two efforts on the line from Curtis Tilt to keep the score 1-0 to Lincoln.

Marc Bola attempted to grab an equaliser for the visiting side, but the 22-year-old could only watch his side fire wide of the top right corner. Grayson followed by making an attacking change bringing on Sulley KaiKai for Ward.

Lincoln were on the hunt for their second with the crowd on the edge of their seats when Walker came close at the back post only for his effort to skim across goal.

Vickers made an important stop in the last few minutes of the game as Madine thought he had scored a late equaliser. The Imps goalkeeper got down well as the pair came one-on-one. The Blackpool striker followed up with a second strike, but it was Anderson who cleared the ball off the line, however, it wouldn't have counted anyway as the linesman had his flag up for offside. 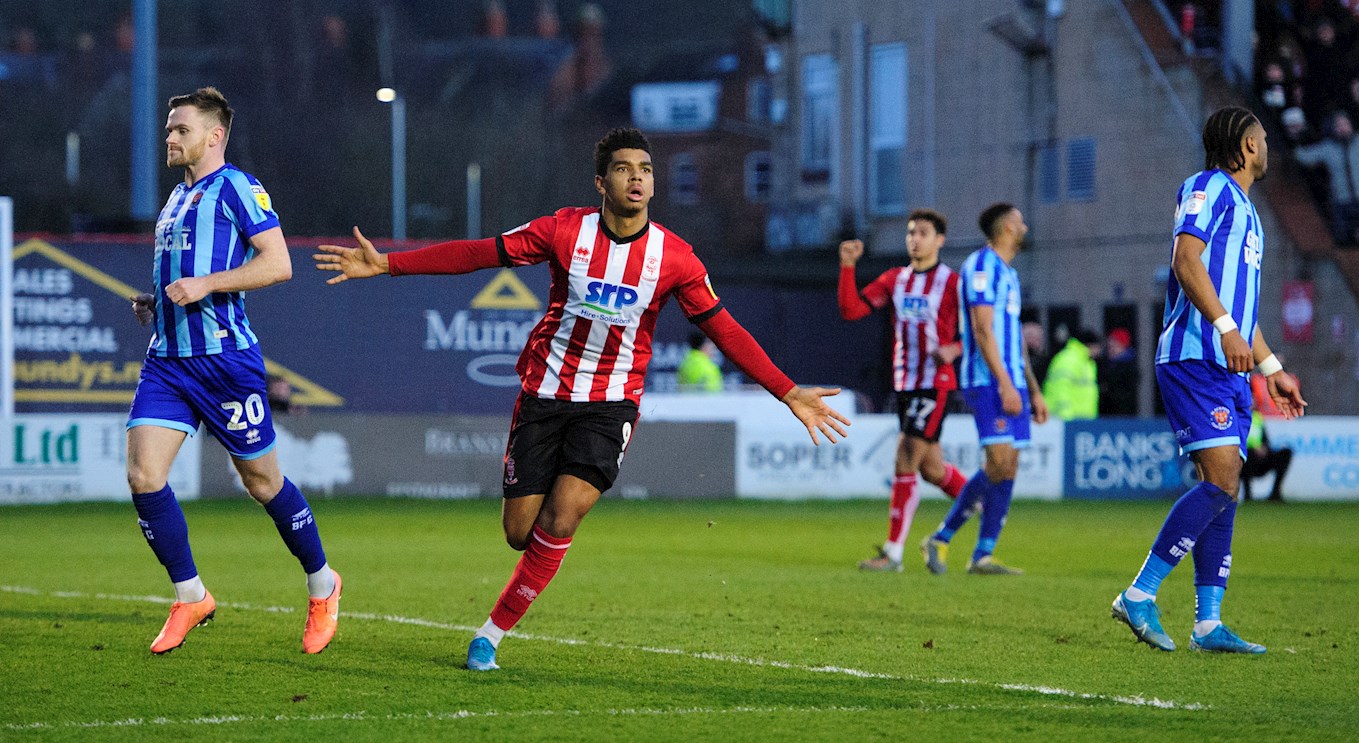