The Imps lost out by one goal to Rotherham at LNER Stadium with Matt Crooks’ early second half header grabbing the visiting side three points.

The Imps’ starting 11 saw three changes to the line-up which started against Southend United last Saturday. Harry Anderson replaced Zach Elbouzedi in the starting line-up with Liam Bridcutt making his Imps debut in place of Tayo Edun. Tom Hopper also made the bench as Jake Hesketh started for City.

New arrival Anthony Scully was included in the matchday squad for the first time making the Imps bench. 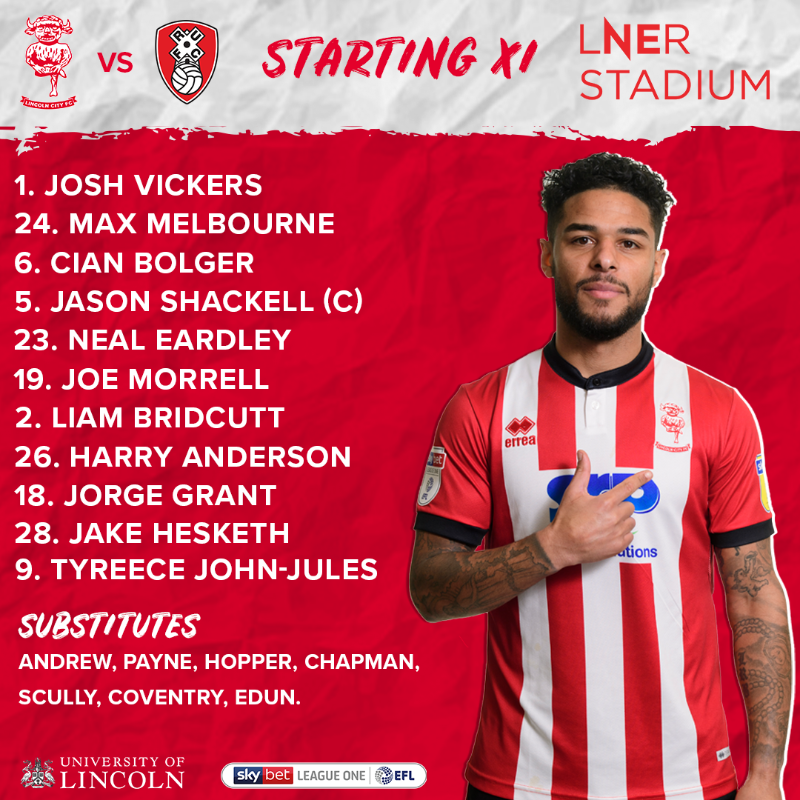 The visitors got the game underway attempting a route one style attack with a ball over the top, however, no real threat was caused with the Imps winning an early throw-in.

The first set-piece of the game came moments later with City winning a free kick on the edge of the area. Neal Eardley played an impressive ball to Harry Anderson who was wide on the right side, he played it into Jake Hesketh who ran through the Rotherham defence before being clattered by Michael Ihiekwe.

Jorge Grant was the man who stood over the ball, with the visitor’s area full of red shirts, Grant decided to take a shot on goal going just wide of Daniel Iversen’s near post.

Liam Bridcutt got his first taste of action in an Imps shirt cleverly winning a free kick in the centre of the park after turning his man. City used the play to keep possession as they looked to make a break.

The Imps were forced to defend in their own area when Chiedozie Ogbene had a number of chances, all hitting Red and White shirts. Cian Bolger put his head on the line with a diving header from the first delivery before Jason Shackell got in the way of Rotherham’s number 19’s efforts.

It was end to end stuff as Grant broke on the left side, this time deciding to produce a delivery into Tyreece John-Jules instead of taking on his man. The Imps striker was just short of the cross allowing the visiting side to clear, however, moments later Hesketh looked to have played through John-Jules but the linesman stood clearly with his flag up for offside.

Iversen produced an incredible save for Paul Warne’s men when Grant smashed a header towards the Rotherham goal following a cross from Anderson. City fans thought they had taken the lead before the Danish shot-stopper got a glove to the ball.

Bolger was the first man in the book after challenging Matt Crooks as The Millers looked to counterattack.

Bridcutt started a great chance for the Imps when he played through Hesketh who was waiting wide, the Imps attacking midfielder then produced a great cross into the area where Anderson was waiting to just slot it home, however, the Imps winger got too much on it sending it over the bar and into the Stacey West stand.

The atmosphere heated up the more the half went on with referee Martin Coy having to speak to each side’s captain on separate occasions. Scrappy challenges from Rotherham gave away silly free-kicks with Hesketh winning one just in front of the halfway line.

Eardley attempted to deliver one into the Rotherham area, but the visiting side cleared with Habeeb Adelakun taking on a number of Imps men before finding Kyle Vassell who played it through to Michael Smith who scuffed his shot wide.

The Imps had their second man booked before halftime with Max Melbourne picking up a yellow for a foul just outside the Imps area. Dan Barlaser placed on in at the back post but a clumsy approach from Rotherham led to a City goal kick.

Bridcutt finished the half by putting in an impressive performance on his debut, challenging the big Rotherham side at every opportunity. The midfielder picked the ball up from a poor pass, bursting forward to play it across where John-Jules was just short of the delivery.

Rotherham took the lead early in the second half with Crooks nodding one home in the area straight past Vickers following a delivery from Vassell.

John-Jules broke down the left side for Lincoln with their first real attack of the half. The Imps forward then played the ball across goal towards the back post, but no one was there to tap home for the equaliser.

Anderson found himself free on the right side, allowing him to burst forward after receiving the ball from Morrell. The Imps winger rushed his shot though bouncing wide of Iversen’s right post.

The right-winger had another opportunity again, this time with support to his left, however, Anderson ignored them attempting to run through the Rotherham defence. He was forced to make a pass when closed down, but the Imps couldn’t quite squeeze through to get a shot on goal.

Michael Appleton made his first change deep into the second half as Anthony Scully made his Imps debut replacing Hesketh behind John-Jules.

Rotherham continued to attack but could only watch their shots hit Lincoln men in the area. The visiting side then won a corner in front of their travelling fans however, the delivery led to nothing allowing the Imps to regain possession.

The visiting side made their first change as Vassell was replaced by Freddie Ladapo. The substitute was quick to get the ball at his feet as he attempted to break through the Imps backline but Shackell stood strong to prevent a Rotherham attack on goal.

Lincoln continued to hunt for an equaliser with John-Jules trying to flick one past Iversen but it wasn’t enough for the Imps forward to find the back of the net. Warne then made his second change when Josh Koroma came on for Chiedozie Ogbene.

Anderson was the next City player to be replaced as Tom Hopper came on to give the Imps another attacking option in their pursuit for a leveller with less than 10 minutes remaining.

Shaun MacDonald came on for Rotherham replacing Adelakun in their final change following a chance for City where Scully broke through the Millers defence before knocking the ball to John-Jules who was met by Iversen in the visiting goal.

With the last chance for Lincoln to equalise, Scully delivered the ball towards the back post, however, the Rotherham goalkeeper was there to calmly collect before the referee blew for full-time. 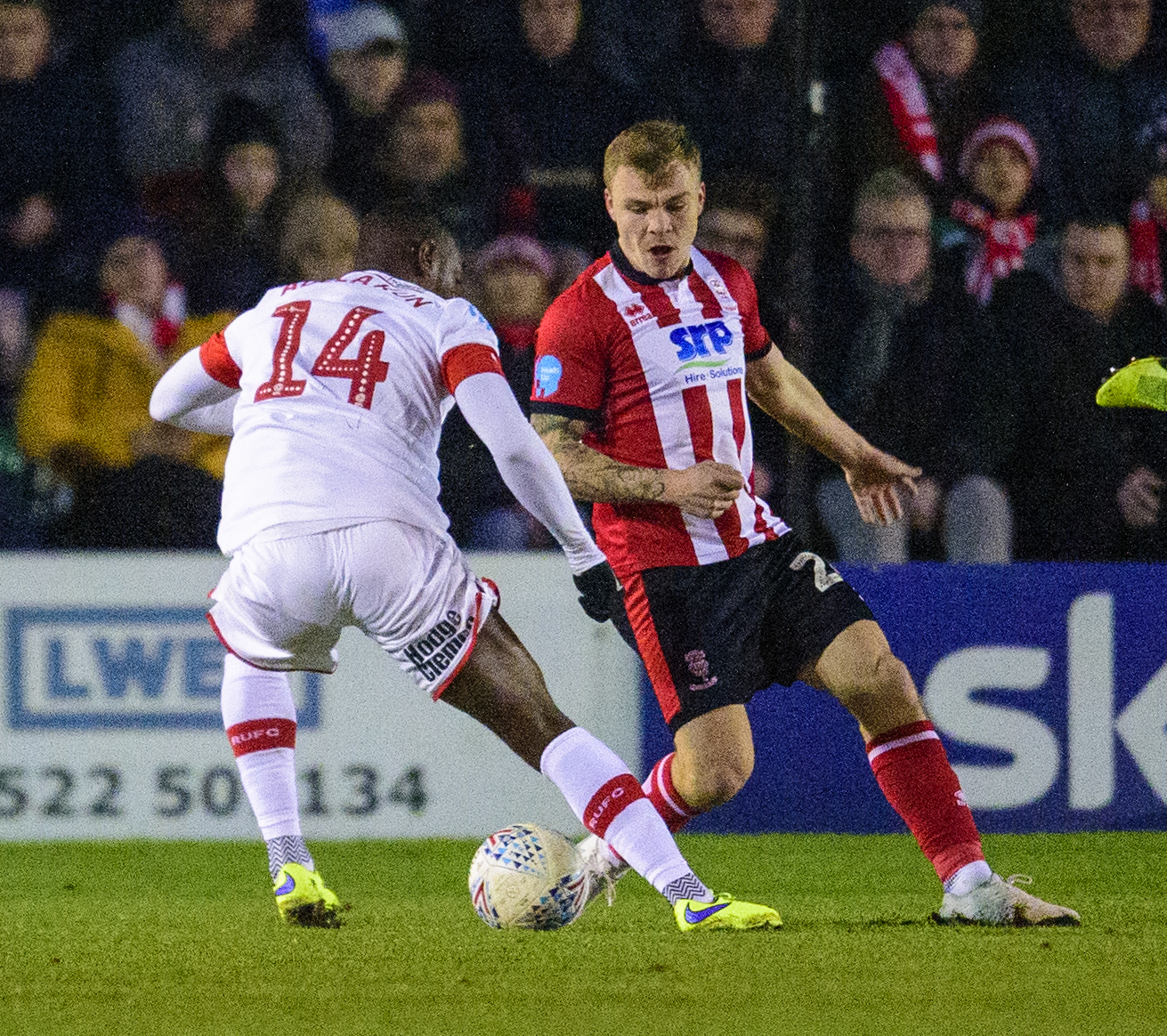