City were to be defeated for the first time on home soil in SkyBet League One as Bristol Rovers won by a solitary goal at Sincil Bank. A second half penalty from Jonson Clark-Harris giving Graham Coughlan's side all three points.

Defeat was harsh on the home side who had much of the possession throughout the game, however, the visitors had the crucial stat in their favour which tipped the balance.

The Imps made two changes to the side which took on Wycombe Wanderers last weekend as Joe Morrell made his return to first team action following his debut for Wales against Belarus in midweek, the Welshman coming in for Michael O’Connor who moved to the bench. Bruno Andrade was the other change, coming in for Jorge Grant who misses out after picking up a knock last weekend with Aaron Lewis, also back from Welsh international duty, replacing Andrade on the bench. 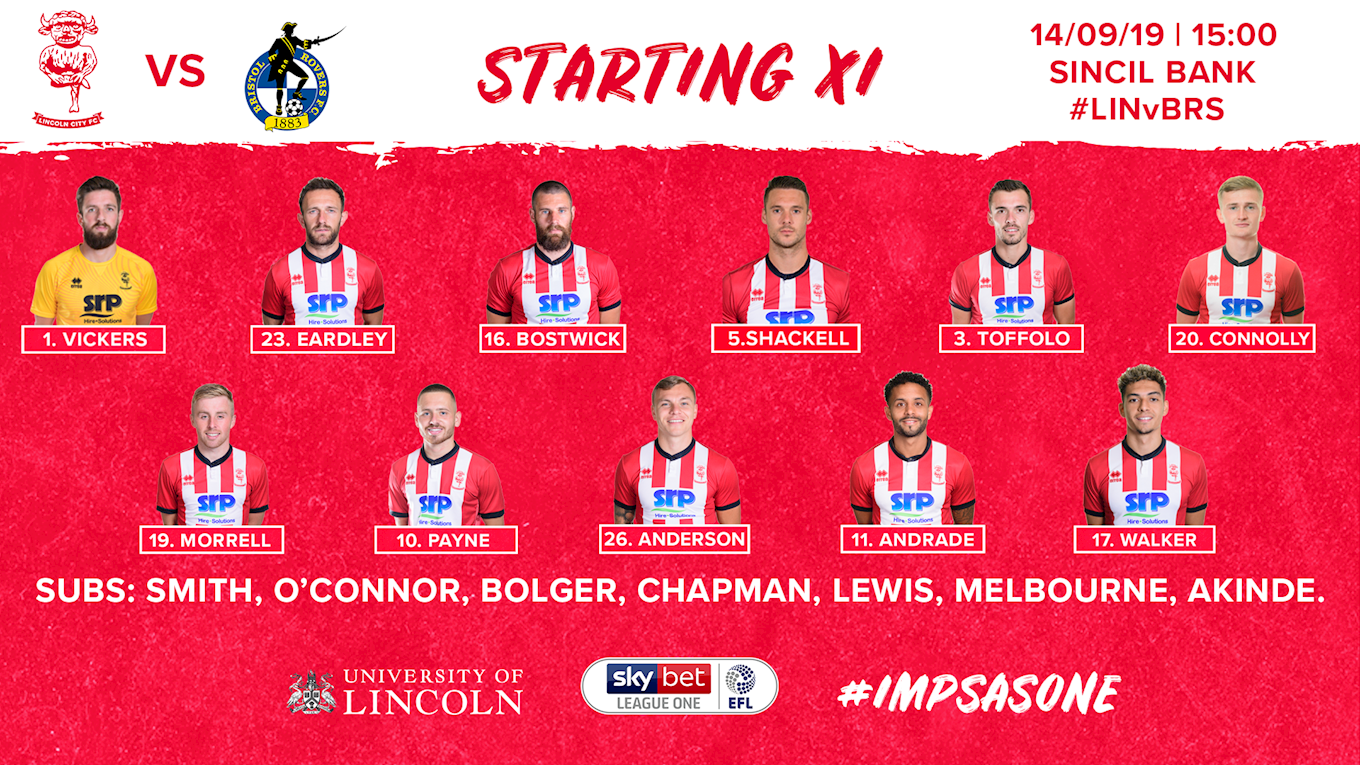 The Imps started brightly and won two corners in quick succession within the first couple of minutes, with Jason Shackell and Michael Bostwick both denied as the Rovers defence threw themselves in front of the ball as it appeared to be heading towards the goal doing just enough to keep the ball out.

Jonson Clarke-Harris was the dangerman for the visitors and his pace brought a first shooting opportunity for Rovers when he was brought down just outside the area. Luke Leahy fired the resulting free kick over the wall but Josh Vickers read the flight of the ball perfectly, getting his body behind it and grasping possession comfortably.

The goalkeepers were making an early name for themselves as Anssi Jaakkola did superbly to keep out a rasping effort from Jack Payne, the City number ten danced round two challenges before getting his effort away which The Pirate’s ‘keeper dived to his right to save.

Sincil Bank was rocking and when Bostwick thundered into two challenges just inside the City half, the intensity lifted to another level. The Imps number 16 first denied the through ball into the feet of Tom Nichols before quickly beating Abu Agogo to the ball in almost the same movement to completely halt Rovers’ charge.  The atmosphere continued to drive The Imps’ forward and Bostwick was close to somewhat inadvertently setting Tyler Walker on his way to goal, the City defender hooked the ball clear with Clarke-Harris looking to break free and it took supreme concentration from Rovers’ centre back Tony Craig to get a vital touch to the ball as it dropped over his head.

The Imps were having much of the possession but the visiting defence were resolute, so it appeared the home side would have to really create something special to breach their rearguard. Nichols was to force Vickers into a good save, the Rover’s number ten looping a header which appeared to be dipping just under the crossbar so City’s ‘keeper made sure by tipping over.

Walker was inches away from the aforementioned moment of magic just over five minutes before the break for The Imps. He curled an effort which had Jaakkola rooted to the spot, the right footed curler from just inside the box on the left was tantalisingly close to nestling in the far corner but it somehow sneaked beyond the frame of the goal. Ollie Clarke, who had seemed to be eager to get a shots away for Rovers, then went close as a low drive skipped off the Sincil Bank turf and wide of the right hand post. That warning shot from the visitors was then followed up with two close calls inside the City box, first was Mark Little up from the back who was denied before Leahy’s effort was blocked as the game seemed to open up but at the interval the score remained level.

City came out of the blocks quickly, pressing high up the field and putting Rovers onto the backfoot. Andrade won a corner, which was played short to Payne but the visitors blocked the chance but City had another chance to cross from a second corner this time though the referee brought the game to a halt as there was an infringement inside the area. Joe Morrell fed Walker down the right and his cross was blocked for a third corner in the opening five minutes of the half, City’s eighth of the game at this point, which Walker was inches away from connecting with. The home crowd were sensing the breakthrough may come and they responded in unison, getting to their feet and urging The Imps forward.

With just over 12 minutes gone in the second half, the first goal was so close from coming for the hosts, Walker played a precise ball round the back for Anderson to hit a low cross as Payne ran to the near post but couldn’t quite connect and the ball rolled agonisingly across the face of goal around three yards out. City were now hammering on the door, pinging crosses into the area and Rovers were clinging on, but defending well under seemingly increasing pressure. 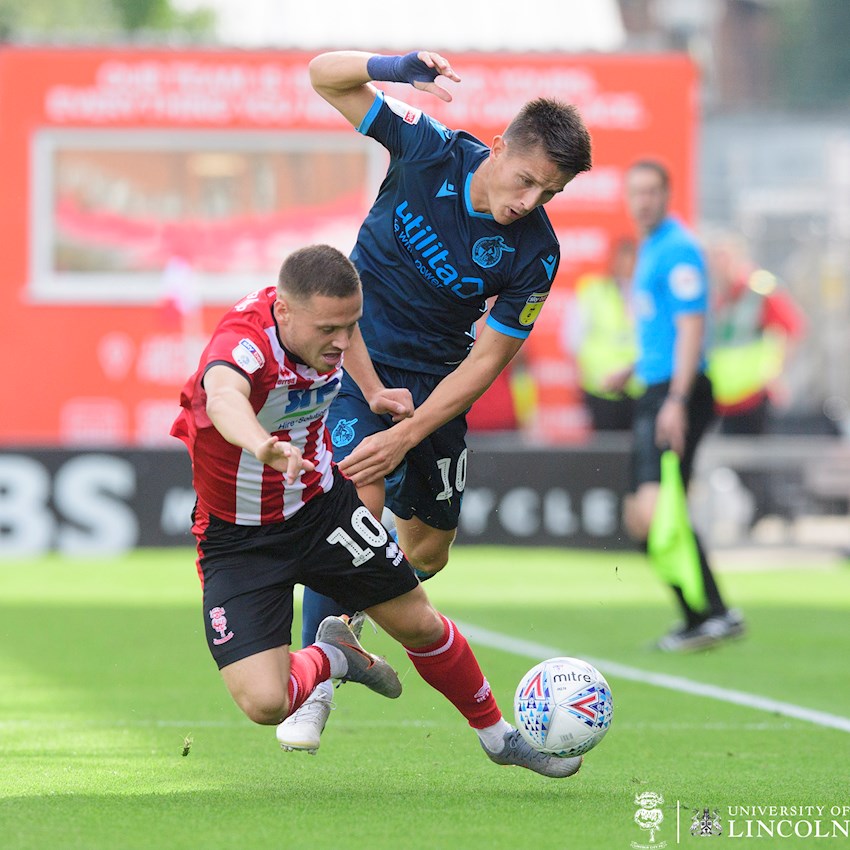 Clarke tried his luck to score totally against the run of play from distance for Rovers, but his long-range effort didn’t trouble Vickers however, moments later the visitors were to get a real opportunity as Nichols went down under the challenge of Bolger and the referee pointed to the spot.

The goal didn’t take the wind out of The Imps’ sails, who continued to look to get their names on the scoresheet however, time was running out as the game went towards the final ten minutes. With City pressing it left spaces in behind their defence but Tyler Smith couldn’t get round Bolger who stayed on his feet to deny the Pirate’s substitute a shooting chance.

The visitors grew in confidence with every second that passed and they tried to stretch their lead as they had a purple patch of possession late in the game but Vickers wasn’t troubled. City rallied again as Morrell went close with an effort from outside the box which took a deflection that diverted it off target, which resulted in a corner that was met by Shackell at the back post but the header went over the top.

Six minutes of injury time were announced and City threw everything at the visitors who had ten men behind the ball to preserve their lead, O’Connor tried a dipping volley which drifted wide. In the last chance of the game, Andrade was brought down on the corner of the penalty area out on the left, but his free kick cannoned off the wall before being cleared to safety giving the visitors the win.