Wycombe Wanderers were to take all three points at Adams Park this afternoon following a sometimes hectic and very committed encounter in Buckinghamshire which had plenty for the neutral but resulted in disappointment for the visiting side.

It was difficult for The Imps after conceding early in the game from a Joe Jacobson free kick with just five minutes gone, he then followed that up 30 minutes later from another set piece ahead of the break. Danny Cowley’s side pulled a goal back five minutes into the second half through sub, John Akinde's close range finish, but it was Jacobson’s day as the Wycombe number three scored his third of the game to end hopes of a City comeback.

The home side made one change from their last outing, with the experienced Adebayo Akinfenwa dropping onto the bench with Alex Samuel coming in meanwhile Danny Cowley made two changes to the side which took on Fleetwood Town in their last game in SkyBet League One action.  Michael O’Connor and Bruno Andrade return to the starting Xi for The Imps as Joe Morrell misses out whilst on international duty with Wales and Harry Anderson takes a place on the substitutes bench. 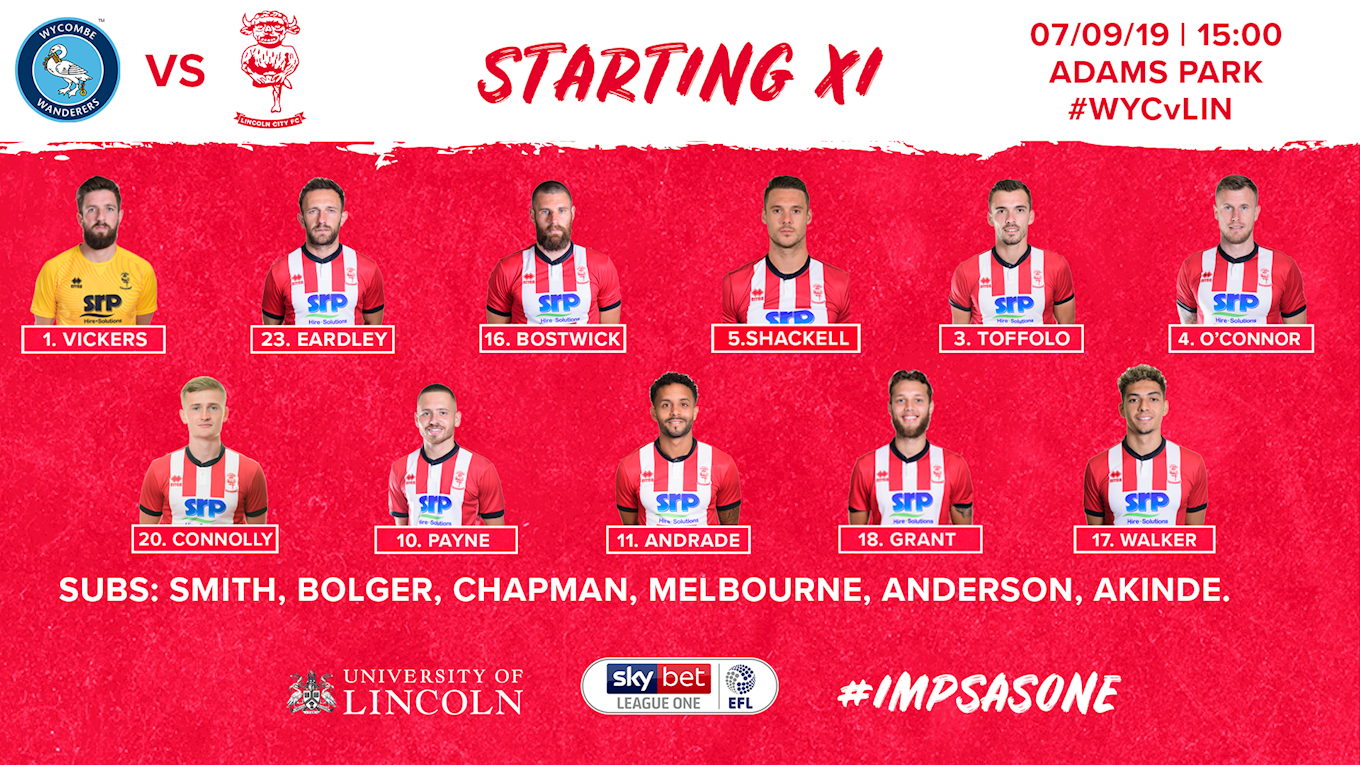 Wycombe made a fast start to the game and were to go into the lead in the fifth minute, a free kick from Joe JACOBSON was curled over the wall, right of centre at the edge of the City box and it went into the bottom corner giving Josh Vickers no chance.

The Imps settled after the early setback, looking to stretch the pitch in wide areas and use the width to their advantage, Tyler Walker spread a lovely ball from right to left for Jorge Grant to cross but the ball in was cleared. The atmosphere was really hotting up with the fans behind both goals making the majority of the noise, with around 800 City fans behind Vicker’s goal in the first half.

Jacobson was keen to get forward and help the home side in attacking area, but it wasn’t to be a quickfire double for the hosts, as The Imps began to creep further into attacking areas. A move through midfield featuring Callum Connolly, Michael O’Connor, Walker, Grant and Harry Toffolo was close to fashioning the first chance of note for City but the home side cleared. It was The Imps who were holding possession for extended periods but they couldn’t quite make the break through the Chairboy’s defence, with Gareth Ainsworth’s side looking to the threat of Jacobson again from set pieces but the low whipped free kick to the near post of Vickers was this time, well saved by the City stopper. Against the run of play, Alex Samuel tried his luck on the edge of the 18-yard box for Wycombe, the number 25 lashing a low drive across the face of the goal but it squirted wide of target before David Wheeler headed over at the back post.

City were having more and more of possession, Wycombe were letting The Imps take control until they got into home territory before pressing hard on the man in possession and closing down space making it very difficult for the visitors to get a shot away.  Wycombe were to go two goals ahead ten minutes ahead of the break, a wicked inswinging corner from JACOBSON headed towards the near post where Darius Charles was lurking but the ball appeared to go straight in from the set piece. The home side were putting their foot on the gas trying to really impose further pain on The Imps and Anthony Stewart thought he had done so when he connected with a right wing cross but the ball went inches over the top.

City were a lick of paint away from getting themselves back in the game after Neal Eardley showed fantastic determination to chase a cross field ball from Grant, before crossing to the near post and Walker was there to hit it first time and it beat Ryan Allsop in the Chairboy’s goal but it cannoned off the upright before being cleared to safety.

Grant had a shot blocked late in first half injury time, before the home side had to hurriedly hack a bouncing ball away from the feet of Toffolo who looked to get a shot away of his own 12 yards from goal following a corner but Ainsworth’s side were able to halt the marauding Imps to maintain their lead.

Danny Cowley introduced John Akinde ahead of the second half getting underway, O’Connor making way for the striker as the visitors added more of a goal threat to their armoury and instantly the City number 29 was getting plenty of attention from the home defence, as they on occasion doubled up on him.

Akinde was in the thick of the action winning the ball deep inside the Wycombe half, he fed the ball to Eardley who delivered a tempting, looping ball into the box that was well defended for a corner with Andrade looking to latch onto it. The corner was played into the box and there was mayhem, two players went down in the six-yard box battling for the ball, Andrade for City and Bloomfield for the home side, but play was allow to continue and the ball was returned into the danger area and was finished by AKINDE at the back post.

After a nine-minute injury delay, which resulted in Bloomfield leaving the field on a stretcher,  play got back underway and the hosts were quick to attempt to reinstate their two goal lead, Samuel somehow managed to wriggle free of the City defence to poke the ball towards the corner of the goal but Vickers made a fantastic save.

City’s goal seemed to have opened up the game, it became stretched and as consequence Walker’s pace was having a growing influence on proceedings.  Nick Freeman was close to netting a third for the hosts, rasping a drive into the side netting with Vickers diving to cover his near post. It was soon The Imps chance to go close, Akinde holding the ball up on the edge of the Wycombe area then sliding the ball out to Andrade who curled a teasing effort just over the top. Adebayo Akinfenwa, on as a sub for the home side, had a shot blocked by Shackell but the rebound fell to Freeman who mishit his effort and it bobbled harmlessly wide.

The Imps were to fall foul of the Wycombe corner for a third time, again it was JACOBSON whose accuracy was deadly, inswinging and beyond the despairing dive of Vickers and into the goal. That third strike for the Chairboys breathed new life through the home side, as they looked to kill off the game, but the visiting supporters were still doing their best to urge the team in red and white forward in search of a way back into the game.

Following the earlier lengthy delay, 13 minutes stoppage time were announced and The Imps were close to pulling a goal back. Akinde doing well to beat his marker and head across the box to Harry Anderson who turned the ball on target but somehow Allsop managed to put himself in front of the ball to block on the line.  Andrade had a shot saved by the former City loanee in the Chairboys ball as the game crept ever closer to full time, before Freeman smacked a shot against the bar. The Imps were close to reducing the arrears through Michael Bostwick as he volleyed a late effort into the floor which bounced over the top, but it was to be the final goalmouth action in a hectic and bruising encounter at Adams Park.