City slipped to defeat in their opening game in the Leasing.com Trophy this evening against Doncaster Rovers at the Keepmoat Stadium.

After going into the lead in the first half courtesy of a good turn and finish from John Akinde, Danny Cowley’s side  were to succumb to increasing pressure from the home side in the second half as goals from Cameron John, Kazaiah Sterling and Alfie May earned three points for Darren Moore’s Rovers.

The Imps made a raft of changes to the side which started the game last weekend in the home win against Fleetwood Town in SkyBet League One as City got their Leasing.com Trophy campaign underway at the Keepmoat Stadium.  Amongst the changes was a debut for Max Melbourne in defence for Danny Cowley’s side, meanwhile Rovers made just two changes to their starting line up from their last game, which was ten days ago, when The Imps visited South Yorkshire. 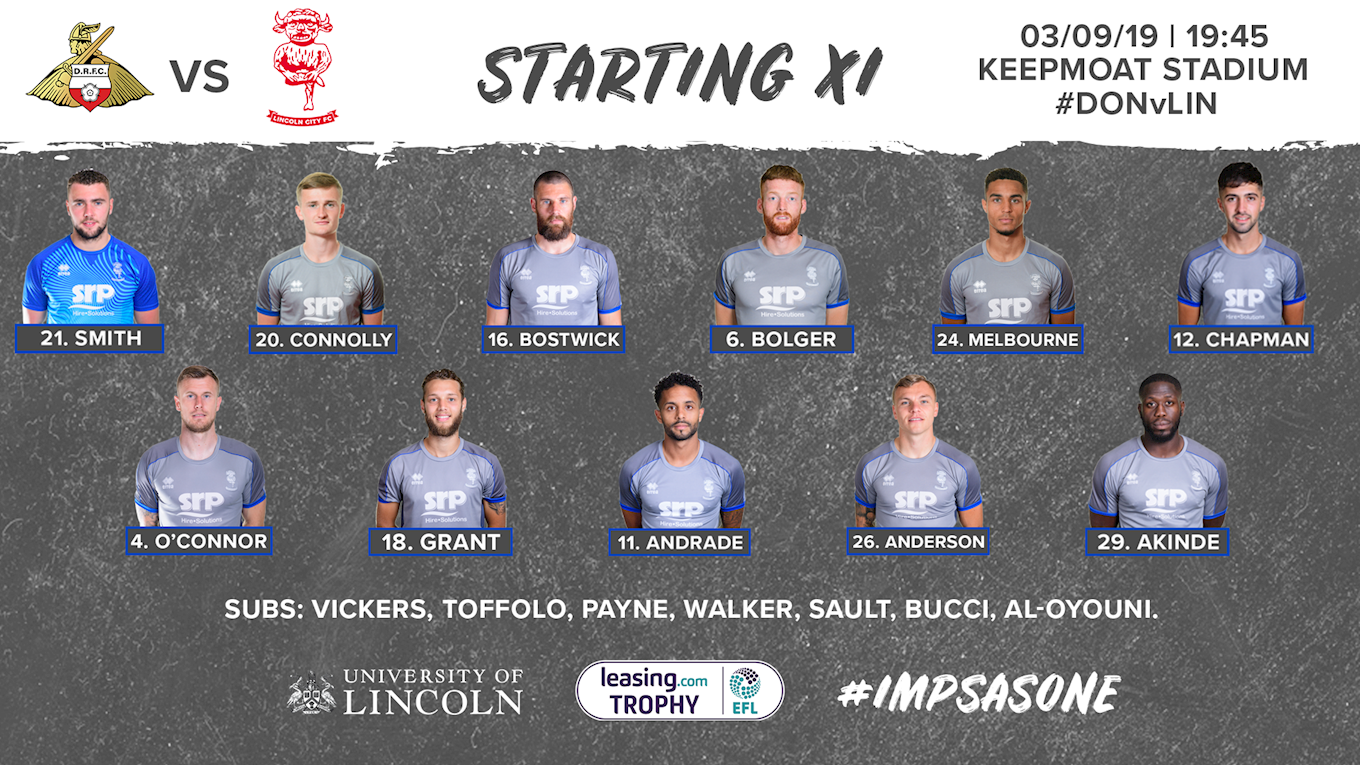 City started the game brightly with Bruno Andrade and Jorge Grant looking sharp and eager to get behind the Rovers defence. But it was Harry Anderson combining with Andrade to give The Imps the first sniff of a chance, with the City number eleven being brought down by Reece James almost on the corner flag. Grant’s centre into the box caused momentary panic as the ball bounced around the penalty spot with Callum Connolly in close attention but Cameron John lashed the ball clear.

The experienced James Coppinger was to threaten for the home side after a move down the left fell to the Rover’s man, his low shot though wasn’t to trouble Grant Smith in the City goal and Alfie May also tried his luck but the ball fell to a similar fate as it rebounded off target.  The home side were having a little purple patch of possession and the home fans were off their seats when Reece James tried a low shot to the near post of Smith but the City ‘keeper confidently left it to hit the side netting.

Connolly sprayed a wonderful ball right to left into the feet of Ellis Chapman, he slipped the ball into John Akinde but the big striker was brought down. Grant’s teasing cross from the freekick went right through the heart of the box begging for a touch to divert it goalwards but it somehow squeezed through into the arms of Rover’s ‘keeper Seny Diang.  Smith was called into action for the first time up the other end of the field moments later, a deep cross to the back post was met by James who managed to get a foot onto the cross but Smith was there to smother the ball.

City won their first corner thanks to the industry of Anderson on the overlap down the right, when all looked lost he chased a lost cause before playing the ball off James. In came the set piece onto the head of Cian Bolger but his looping effort was to go over the top.

Rovers would arguably have been disappointed they hadn’t taken the lead however, for all the attacking intent of the home side, The Imps’ defensive solidity was just as pleasing on the eye. Fully committed, organised and most importantly still holding strong, in fact it took the hosts until five minutes to the break to force Smith into a save when Brad Halliday’s25 yard effort was tipped over by the Imps’ ‘keeper.

Andrade was a whisker away from opening the scoring just before half time when he cut in from the left to curl an effort just beyond the far post but the deadlock was broken by The Imps with two minutes of the first half remaining. AKINDE receiving the ball into feet from Grant, before touching it beyond his marker, rolling round another then sidefooting home beyond Dieng. Niall Ennis had a chance for Rovers seconds before the whistle blew, his header from ten yards though was well watched by Smith who grasped possession confidently.

Both sides made a switch at half time, The Imps introducing former Rover’s defender Harry Toffolo with Bostwick going off, meanwhile Jon Taylor came on for the hosts with Coppinger leaving the field.

The pace of the game slowed down considerably at the start of the second half but the commitment in the tackle definitely showed no signs of stopping. The home side went close as a long-range effort was well saved by Smith, however Rovers did manage to level from the resulting corner as somehow Cameron JOHN managed to force the ball home from almost under the crossbar.

The goal roused the home supporters and thought Taylor has scored his second in as many games against Rovers when he got a shot away at the edge of the box, but the ball flew over the top.  However, it was City who were given a chance to go ahead for a second time, Akinde was brought down by Cameron John in the penalty area and the City striker got up to take the spot kick however, Diang guessed right and saved low to his left to keep the scores level.

It was Rovers who were to get themselves into the lead for the first time with just over twenty minutes to go as, sub Kazaiah STERLING ghosted into the box to meet a left wing cross from May and head beyond Smith and into the goal. The home side were now looking for more and went close to extending their lead with just under twenty minutes remaining, a dangerous low cross from James was sidefooted on target by Kieran Sadlier but Smith made a fantastic reflex stop. The home side were to extend their lead though and score the final goal of the game from a set piece, the ball was played into the box from a corner towards MAY who took aim and drove home hard and low into the far corner.