The Imps return from the South Coast beaten but will feel very hard done by after a good performance against Portsmouth which most would say deserved much more.

Key saves from Pompey ‘keeper Craig McGillivray in the first half were just as important for the hosts as the solitary strike from John Marquis which ultimately separated the two sides. McGillivray denied Bruno Andrade and John Akinde in a matter of a minute with two saves which kept the home side in the game before Marquis struck the decisive strike from close range in the first half.

City made two changes to the side that faced Shrewsbury Town at Sincil Bank last weekend as they prepared to take on Pompey at Fratton Park for the first time since the early eighties this evening. There was a return to the starting eleven for John Akinde and Callum Connolly, Akinde coming into the side in place of Jorge Grant with Connolly stepping into the back four following the suspension of Cian Bolger after his red card last weekend. 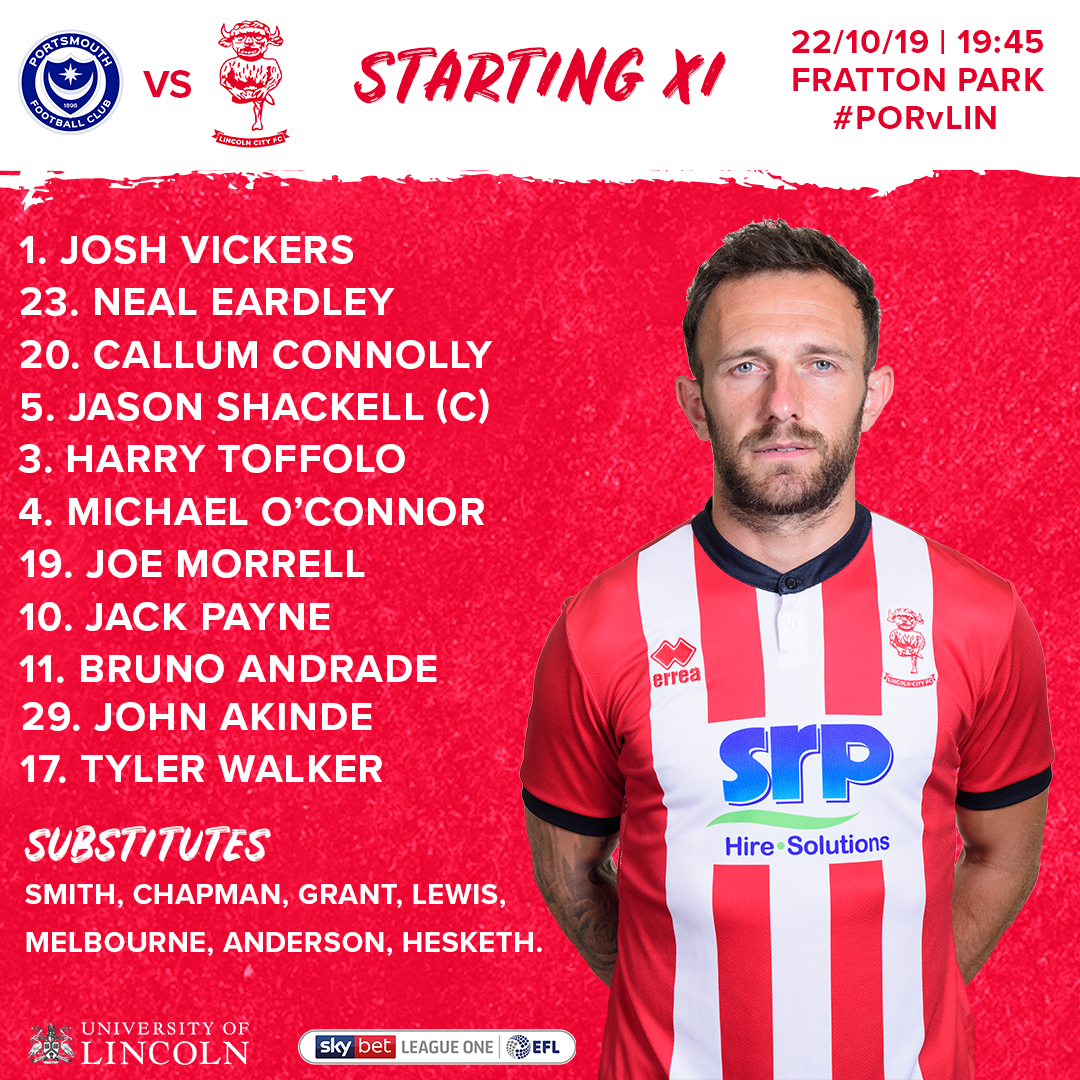 The home side came flying out of the traps early and were to get a first shot on target within two minutes of the game getting underway. Ryan Williams getting control of a left wing cross at the second attempt to swivel and fire at goal from the edge of the box only to see Josh Vickers confidently getting down to his right to save.

John Marquis then tried from a similar distance but that shot was also to be snaffled up confidently by Vickers as the home side piled forward backed by the famous Pompey chimes.

City though not to be outdone were steady in possession, patient and looking for the spaces to exploit in a very open first ten minutes and The Imps were close to opening their account for the night following a free kick on the right just inside the home side’s half. Michael O’Connor played it into the heart of the box and Callum Connolly was there, but his powerful header from almost on the penalty spot flashed wide of the mark with Craig MacGillivray in the Pompey goal rooted to the spot.

Former Pompey striker, John Akinde playing up front with Tyler Walker was causing issues for the home defence, with ex City defender Sean Raggett often tasked with looking after City’s number 29 who initially looked to be struggling to cope with the striker’s strength.

The Imps were again close to opening the scoring after around 20 minutes, the home crowd were starting to be quietened by the confidence of the visiting side and that silence was close to being compounded by Michael Appleton’s side three times in the space of a minute. Bruno Andrade taking control following a fantastic burst forward by Joe Morrell, the City number eleven hit a stinging low effort which MacGillivray somehow kept out but conceded a corner. The ball in from the right by Jack Payne was met by Akinde and the Pompey stopper was there again, getting in the way of the goalbound header from point blank range before Andrade’s attempt to hook the rebound goalwards was also grasped by the ‘keeper.

Payne’s influence on things from a City point of view were increasing and he provided the cross for Andrade to try an effort first time on the volley at the back post, but unfortunately it didn’t have the requisite pace to beat the ‘keeper. However, with the open nature of the game showing no sign of letting up, there had to be a goal coming and it went the way of the home side. A deep free kick to the back post was met by Christian Burgess, he powerfully headed on target but Vickers made a fantastic save but he couldn’t divert it away from the goalmouth and MARQUIS tapped home on the line.

Morrell tried a curler almost from the restart which crept just wide via a deflection, and the resulting corner was hurriedly cleared by the home side who appeared to struggle with set pieces into their area. Andrade warmed the palms of MacGillivray after showing great skill and composure to outfox Williams in midfield, then O’Connor drifted into the box after starting the next City move but he couldn’t steer his effort on target as The Imps finished the half the stronger. At half time both sides would argue they deserved to be in the lead, however, it was the hosts who held the title of leaders going into the break.

Williams had the first effort in anger from either side in the second half, a long ball forward onto the head of Marquis setup the chance with Harness involved too, Williams running onto the bouncing ball to hit a rising effort which Vickers was confident to watch fly over the top.

The Imps, kicking towards their fans in the second half were definitely still in proceedings with the hosts looking at times nervous with unforced errors creeping into their game. Tyler Walker showed great awareness under pressure to slide a ball round the back of the home defence for Andrade, he looked up and fizzed a low cross to the near post, Akinde raced across to meet it but was just put off enough by Burgess as the ball rolled beyond the striker and to safety.  City’s supporters were getting louder, while the home fans were seemingly losing faith in their side despite them being in the lead.

The Imps were standing taller, looking more and more confident in possession, O’ Connor found Walker who had drifted out wide on the right, his cross was in the corridor of uncertainty on the edge of the six yard box and MacGillivray dived at it and palmed it away and out for a corner. City were now making inroads into Pompey territory with regularity, Eardley the next man to ping in another dangerous cross which the home side struggled with but just did enough to stave off another threat. 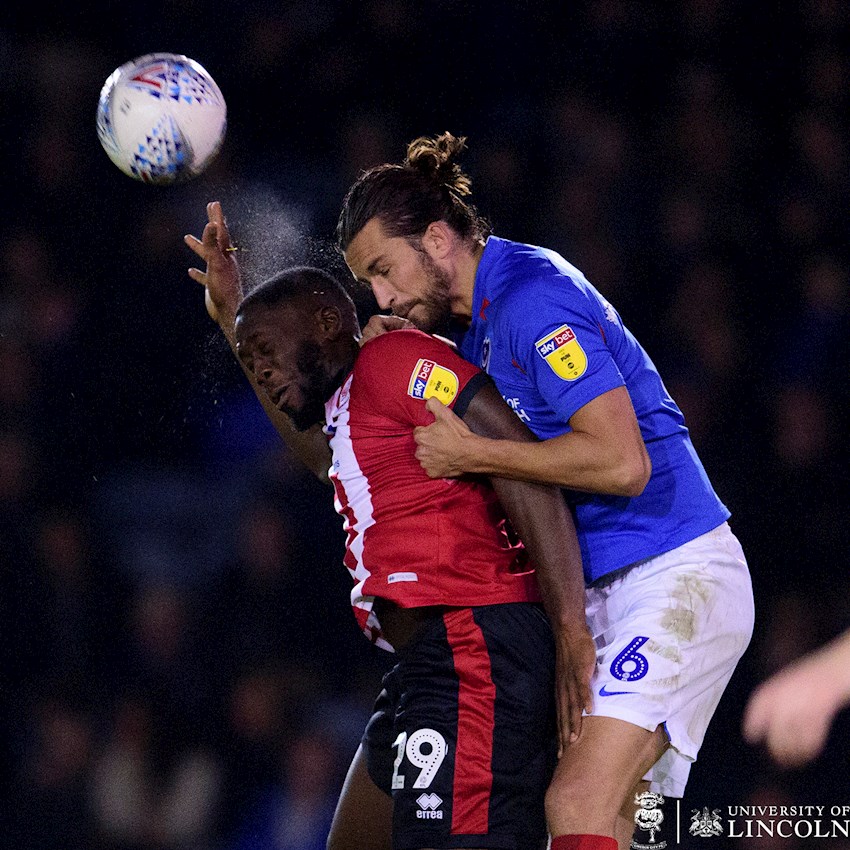 Burgess then almost scored what would have been a goal completely against the run of play for Portsmouth, the centre back with almost a carbon copy of the header which lead to the only goal of the game to this point. Vickers this time holding onto possession on the goal line with Marquis diving in to attempt anything like a rebound, only to see his efforts penalised for a foul on the Imps’ keeper who still retained the ball in his grasp.

Andrade almost ghosted past his marker and was close to giving two more the slip up the other end of the pitch as City once again looked to pounce quickly, but he elected to shoot only to see his effort blocked.

For the first time in the second half, the home side had a sustained period of possession but save for a corner which was well dealt with by Vickers, they hadn’t looked likely to add to their lead.  The Imps introduced Harry Anderson and Jorge Grant to the fray looking for a flourish of a finish in the final ten minutes of the game, pushing further forward in search of the leveller but leaving themselves open on the break. Evans though couldn’t profit from a burst forward from the home side though, as he lashed well off target.

City made a final late sub introducing Jake Hesketh onto the field, looking for a new avenue to goal but it just wasn't to be.