City picked up a point this evening in a tough battle against Shrewsbury Town at Sincil Bank. It was a game of few chances but plenty of talking points, as neither side could break the deadlock come the final whistle.

Tyler Walker had a goal chalked off for offside in the second half, before Cian Bolger was dismissed late in the game. Josh Vickers made a couple of vital saves as the visiting side pushed for the win but it could be argued the result was a fair reflection of the game.

The Imps made one change from the team which took on Peterborough United last weekend, Joe Morrell returned to the heart of the City midfield after returning from international duty with Wales, Ellis Chapman the man replaced but he did take a spot up on the substitutes bench.

Shrewsbury brought in Jason Cummings and Fejiri Okenabirhie to their starting line up as they take took to the field for their first SkyBet League One fixture in almost two weeks. 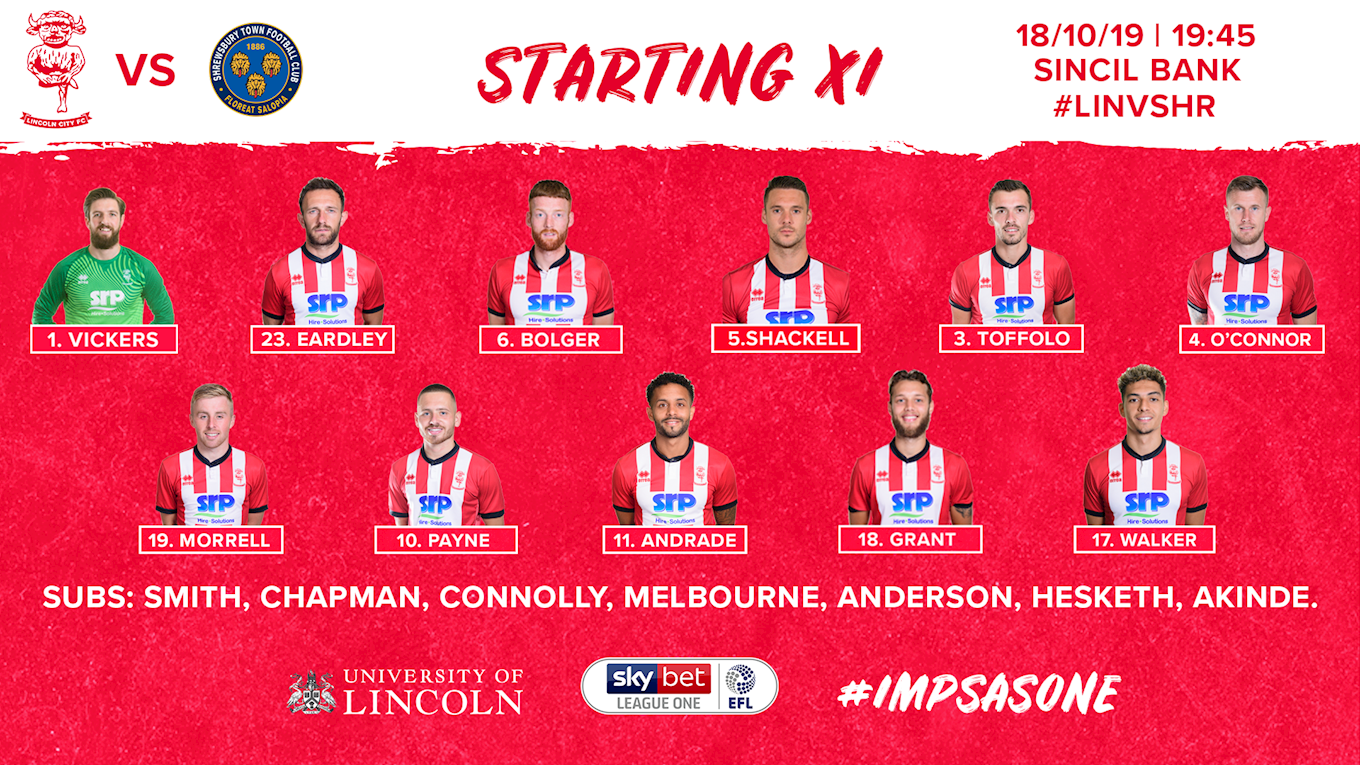 The rain poured down making the pitch very slick ahead of the referee getting the game underway and as the teams entered the fray the supporters were in fine voice. It was a confident start to proceedings with both sides looking tidy in possession, with City looking to stretch the width of the pitch as play was switched from side to side but it was a direct ball which almost created the first chance. Cian Bolger looking for the diagonal ball out towards the left hand side which as it came down from the brisk autumnal sky it almost deceived Ro-Shaun Williams at the back for the visitors but he just got enough on the ball to keep it away from the marauding Jorge Grant.

Out of possession City were closing down space quickly, forcing the visitors into hurried passes and following a challenge from Michael O’Connor and then Jack Payne as The Shrews attempted to play the ball across midfield, The Imps burst forward and Bruno Andrade almost profited as the City number eleven cut inside from the right to lash a left foot shot just over the top.

The Imps continued to have the better of the ball, with much of the game being played in the half of The Shrews. Harry Toffolo and Grant linked well down the left but they were snuffed out at the last by wingback Donald Love who did well to deny the crossing opportunity. Play switched to the right hand side where Neal Eardley clipped the ball into the penalty area in a similar fashion to which led to the opener against Sunderland but this time Tyler Walker was denied a chance at turning it goalwards.

Eardley was the creator of the next opportunity as The Imps continued to be positive in possession, once again the Welshman was the man to put in the cross this time Grant did meet the ball but his header drifted just wide. Payne showed terrific quick feet to then setup O’Connor for a shot on the edge of the box but his curler was off target, despite not forcing Max O’Leary into a save of note the City fans were certainly showing their appreciation for the creativity being shown and were doing all they could to push the home side into an opening goal.

Sam Rickett’s side were visibly growing in confidence as the half wore on and with the lively Ryan Giles on the left they looked to get a foothold in the game. Sean Goss pinged in a very dangerous cross from a free kick around 35 yards out, left of centre, which City defended well, it fell to Love but his effort outside the box didn’t have the requisite quality to trouble Vickers as it went well wide of the target.

Chances were few and far between in terms of troubling either goal, but much of that was down to the quality of the defending from both sides, which saw the first half finish goalless.

The visitors made the first attacking foray of the second half, winning an early corner which Omar Beckles looked to connect with at the near post but Jason Shackell was there to clear the danger as the defensive strengths of the first half were still very evident.  Shackell was again in the right place minutes later to read a low ball in towards the feet of Okenabirhie, the City skipper striding in ahead of the Shrew’s frontman giving him not a sniff of an opportunity.

Walker up the other end did get a shot away at the near post, although it went wide then Giles quickly broke back up the other end only to see Bolger throwing himself in the way of the low drive as the game opened up more as the hour mark approached. Goss then hit a fierce direct free kick on target which needed Vickers to be alert and to make a fine stop to as it arrowed towards the top corner.

Andrade’s pace started to put pressure on the visiting defence and Giles was trying to do the same for The Shrews as things were becoming stretched and a little disjointed with both sides going for the elusive and looking like, potentially decisive goal. The Imps introduced John Akinde to the game with just over twenty minutes remaining, Grant the man replaced and the visitors too made a change up front as Okenabirhie was replaced by Shaun Whalley. 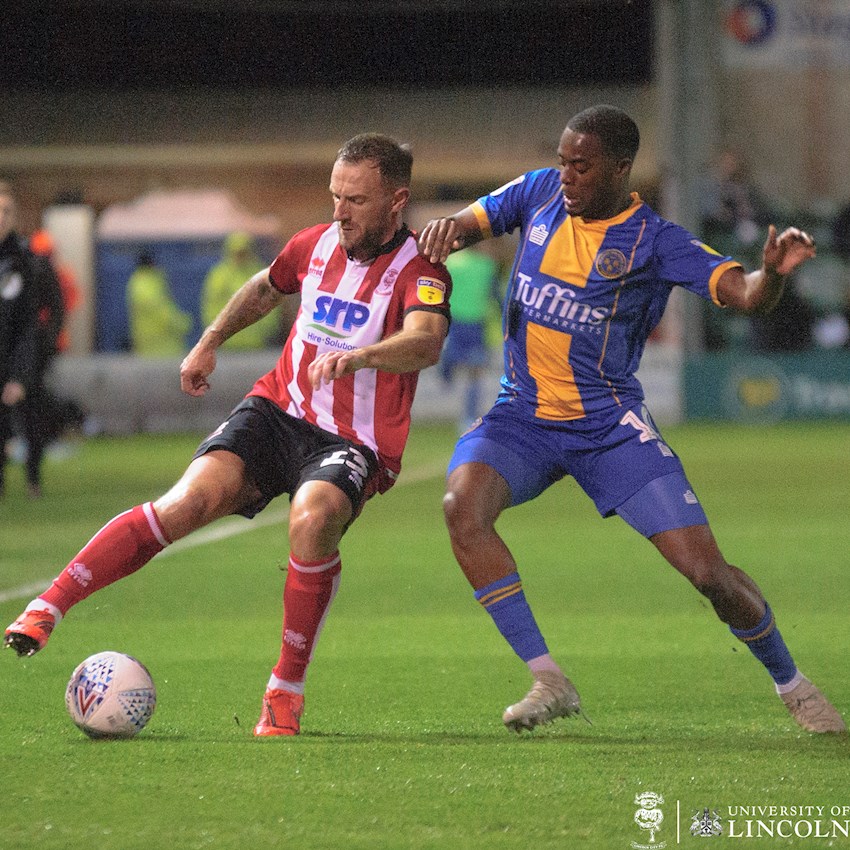 The home side were to have the first opportunity following the change in personnel, a prolonged period of possession was brought to an abrupt halt when Morrell was brought down on the edge of the area buy a combination of Oliver Norburn and Josh Laurent. Payne put in a teasing centre to the back post which looked to be heading towards Akinde at the back post, but Love showed good positioning to beat the striker to the ball and nod away from the City sub.

The Imps were then to go closer than they had all evening when Walker picked up on a slack crossfield ball by the visitors, beating Goss to the ball and then set Akinde away who took his time before cutting inside and firing towards the far post, O’Leary did very well to save, the ball rebounded to Walker who swept home but the assistant’s flag was up for offside against the City number 17. To add to that disappointment, Bolger was to be dismissed for a clash with Whalley out on the left flank with ten minutes left to play. The visitors pressed for a winner with their numerical advantage, Norburn testing Vickers, who made a terrific save down low to his right then the keeper was called into action again to save twice, the second one from Whalley another terrific stop as he tipped over just as it looked like the ball was dipping under the crossbar.

Next up for The Imps is a long trip to the south coast as Portsmouth are our hosts on Tuesday evening. Remember, if you can't get to Fratton Park then the game is LIVE on WeAreImps iFollow for domestic and international viewers and is available to purchase - HERE