The Imps certainly ended the decade on a high note with Sunday’s 5-3 victory over Ipswich Town and the 10,012 present witnessed a fairly rare occurrence as it was just the seventh time in 4,490 regular season Football League matches that City have won by such a score line.

The first such victory came in April 1930 when the final match of the season saw New Brighton visit Sincil Bank and as on Sunday City led 2-1 at half time thanks to goals from Harry Kitching and Evan Jenkins either side of a Dick Johnson penalty.  Jenkins completed his hat trick after the break along with a Harry Roberts goal before Job Taylor scored twice in the final minutes to give some respectability to the score for the visitors.

Two years later in April 1932 City were involved in a two-way fight with Gateshead for the Division 3 North title and the one promotion place available when the second, and to date the only such victory away from home, was obtained.  Bottom of the table Rochdale were the opponents and having picked up a solitary point from their previous 22 games a City victory was expected but the hosts made the Imps work hard for the two points. 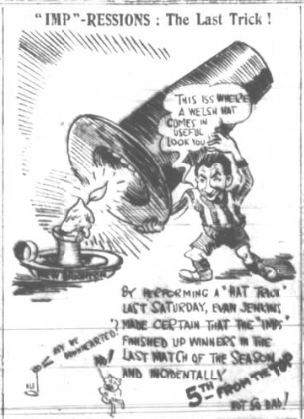 Facing a strong wind Harry Pringle had an early effort disallowed for offside before George Whyte did score but Idris Williams quickly equalised along for Harold Riley to restore the lead only for future Imp Joe McAleer to equalise again.  Phil Cartwright, who also had a goal disallowed during the game, scored City’s third before Whyte added a fourth before half time.

Despite having the wind behind them in the second half City were shocked when McAleer pulled a goal back just after the interval and it wasn’t until fifteen minutes from time that Pringle did get on the scoresheet to secure the victory.

Boxing Day 1932 saw the third instance when bottom of the table Chesterfield visited Sincil Bank.  City were hopeful of setting a new attendance record but thick fog during the morning was blamed for only 9314 attending, including a large number of visiting supporters, and when Harold Riley gave City the lead after just four minutes it looked like being a straight forward afternoon for the Imps but by half time Colin Cook and Sam Abel had given the visitors the lead and Abel increased that just after the  interval.  City though rallied and Alf Young and Arthur Atkinson score to level the scores before Jack Wilkinson and Riley added two more in the final ten minutes.

Before the decade was over Rochdale were again the victims as they visited Sincil Bank, again stuck to the bottom of the table, in November 1936.  Rochdale took the lead after fifteen minutes through ex Imp Walter Hunt but by half time centre forward John Campbell had replied with four goals and he added a fifth just before the hour mark before Harry Marshall and Hunt scored two late consolations for the visitors.   Legend has it that Dale’s centre half Andrew Carr pleaded with Campbell in the second half to take it easy as he was fearful, he would get the sack if Campbell scored anymore!

It wasn’t until April 1960 that City next won a Football League match 5-3 when Charlton were the visitors in a Division 2 fixture.  Andy Graver gave the Imps the lead in the 11th minute and it remained that way until a crazy nine-minute spell saw a further four goals as Johnny Summers equalised in the 30th minute before Sam Lawrie put Charlton ahead two minutes later.  Graver got his second in the 34th minute and five-minute slater Derek Hawksworth put City back in front.  It remained that way until the 51st minute when John McClelland extended the lead and Graver completed his hattrick in the 80th minute with Denis Gratton putting through his own goal in the final minute to complete the scoring.

Prior to Sunday it was a Division 4 match in March 1973, witnessed by 3562, that last saw City triumph by a 5-3 score line in the Football League.  John Ward headed City into the lead in the 21st minute but less than sixty seconds later Ian Lawther equalised for the visitors Stockport County.  John Griffiths then gave them a half time lead before Ward completed his hat trick in the second half scoring either side of an Alan Harding effort.  Lawther threatened a comeback with his second goal seven minutes from time but Harding scored City’s fifth with five minutes left to complete the scoring.

In addition to the Football League games City in first team competitive games have also triumphed 5-3 on the following occasions: