The Imps returned to winning ways in SkyBet League One after defeating Fleetwood Town at Sincil Bank this afternoon.  After a strong start by the visitors it took two quick goals to break the deadlock and give the home side control in a very competitive game against Joey Barton's side.

The visiting side had the lions share of possession for much of the opening part of the game but as the saying goes, goals win games and it was certainly true when Tyler Walker scored a brace in two breathtaking first half minutes, ten minutes ahead of the half time break. His first, a wonderful diving header from a Harry Toffolo cross and the second a typical strikers finish, racing away to poke home under the 'keeper and into the net.

Ahead of kick off The Imps’ boss Danny Cowley made one change to the team which last took to the field in SkyBet League One, new addition Callum Connolly came in to make his City debut with Michael O’Connor stepping onto the substitutes bench. Similarly for the visiting side there was one change from their last outing in the league, a 2-0 win over Accrington Stanley as Harrison Biggins came in for Ashley Hunter. 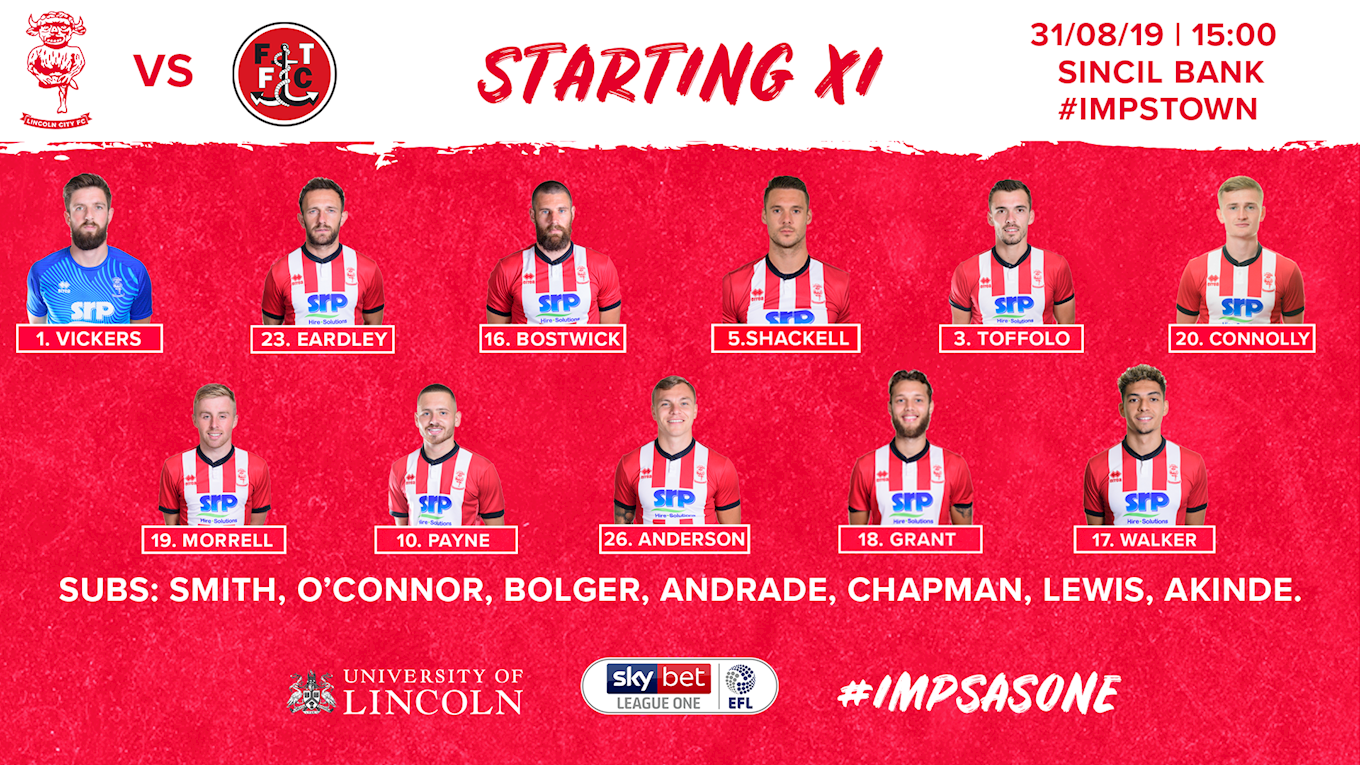 The game kicked off in the midst of a torrential downpour, making the surface very slick but it wasn’t catching either side out, in fact it seemed quite the opposite as both teams were looking to use it to their advantage, skimming low passes along the wet Sincil Bank pitch.

Fleetwood were very patient in possession, taking their time moving the ball from left to right but while they had plenty of the ball they weren’t penetrating City’s defence or finding space to crack an effort on goal.

Despite the lack of dangerous goalmouth action, the home fans were in fine voice looking to urge the Imps forward however it did appear to be a game which would be a tight encounter right to the last minute with a moment of magic or a set piece chance looking the likeliest way of settling proceedings.  Jorge Grant almost provided the first chance for The Imps, taking a lovely first touch before floating the ball to the back post towards Harry Anderson but he couldn’t quite get over the ball and his header skimmed well wide of the target.  Anderson did though get The Imps’ first attempt on target, Jack Payne this time providing the cross for the City number 26 to head on target, but his header didn’t have enough purchase on it to beat former Imps’ ‘keeper Matt Gilks.

Josh Morris tried a snapshot with very little backlift that gained speed off the pitch, but Josh Vickers was relatively relaxed as he watched it go a few yards wide with the visiting side still to force him into a save. The first corner of the game went the way of the visiting side, Morris’ centre was met by the leap of Jason Shackell who powered the ball from danger in the midst of a crowd of players and it almost led to Payne racing away, however it needed Gilks to come a good 35 yards from his goal to beat the City man to the ball and clear.

The move of the game went the way of The Imps who were very close to creating a wonderful opportunity through Harry Toffolo and Payne, the pair connecting to set Payne away into the area but a last gasp challenge just stopped the City number 10 from getting a chance to fire on goal from deep inside the box.

After just over 30 minutes of what was a chess match of a game, The Imps just lit the blue touch paper and were to score twice in a matter of minutes and break the visiting fan’s hearts. Firstly, Grant switched play out wide to the left hand side to Toffolo and his cross was pinpoint, TYLER WALKER dived to head home into the bottom corner then the striker was back at it again within 60 seconds, Callum Connolly playing the ball beyond the Fleetwood defence, WALKER raced away to slip the ball home between the legs of Gilks and into the net.

For the first time in the game, the visitors looked rattled and City were pressing harder than ever, looking to make it three goals to the good ahead of the break. Grant was brought down just outside the box and lined up the resulting free kick but his effort cannoned off the wall. The Imps kept on the pressure and Coutts resulted to hacking down Payne with seconds of the half to go, Grant whipped in a wonderful inswinging ball but Connolly was inches away from connecting with.

Ahead of the second half getting underway the visitors made a tactical switch, bringing on former Welsh international striker Ched Evans with Peter Clarke the man withdrawn as Joey Barton added another striker to his options in attacking areas as they looked for a way back into the game.

However, it was The Imps who were showing signs of extending their first half lead, Walker breaking powerfully into the opposing area only to see his path stopped by a strong but fair challenge from Harry Souttar.  City were close to making it three with just ten minutes gone following a quick move down the left flank with Grant and Toffolo involved, the ball was pinged hard and low across the box it was just ahead of Payne but Anderson was haring in but his sidefooted effort whistled over the top from close range.

Fleetwood had their first chance of the second half just ahead of the hour mark, sub Ashley Hunter crossed for Paddy Madden but the Cod Army’s top scorer couldn’t divert it on target. That half chance perked up the visitors, a first shot on target came from Danny Andrew, the full back curling a free kick over the City wall and Vickers had to dive to his right to save, getting two strong palms onto the ball deflecting the ball from danger.  Fleetwood were growing in confidence and it took a well-positioned Connolly to get in the way of a right-wing cross from the men in yellow. 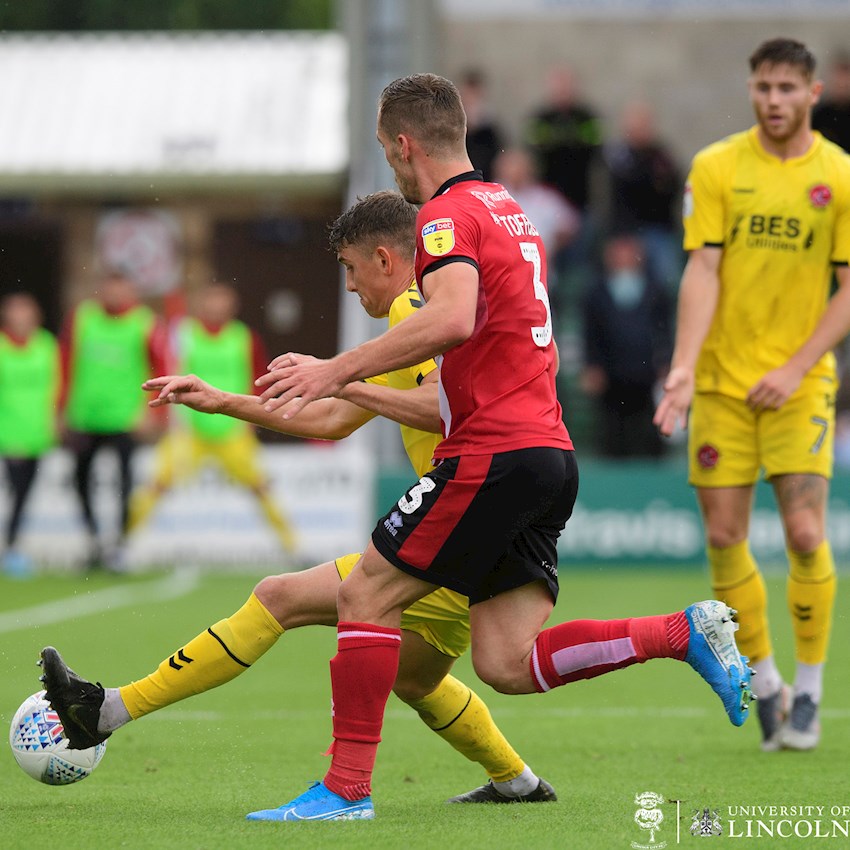 The Imps took their time, slowed the game down and looked to take the wind out of the sails of the visitors whose change of formation and personnel early into the second half had given them a little more impetus in the game. City then hit Fleetwood on the break, Anderson showed tremendous determination to win the ball back from Hunter just inside the City half, he fed Walker who returned the favour to the marauding number 26 but Anderson’s low centre couldn’t be turned home.

Jordan Rossiter forced Vickers into a low, but comfortable save as he smashed a curler from distance but City were soon back in attack after a fantastic touch from John Akinde brought the ball down, Grant took over and he slipped the ball along the edge of the box to Connolly who shot over the top.

City finished the game strong, Anderson was first to be denied by Andrew a chance to get through on goal for his 4th of the season, before Soutter made a terrific block from a goalbound effort from Akinde with City now in control in the final ten minutes but there was a scare when Evans should have done better from six yards with the goal at his mercy but the ball went wide of the target.

The visiting side will arguably feel somewhat harshly done by as they showed plenty of promise and composure in possession, however, with The Imps ability to limit the Fleetwood attack to only two shots on target it demonstrated no matter how much you have possession, it’s all about taking your chances and City did just that. 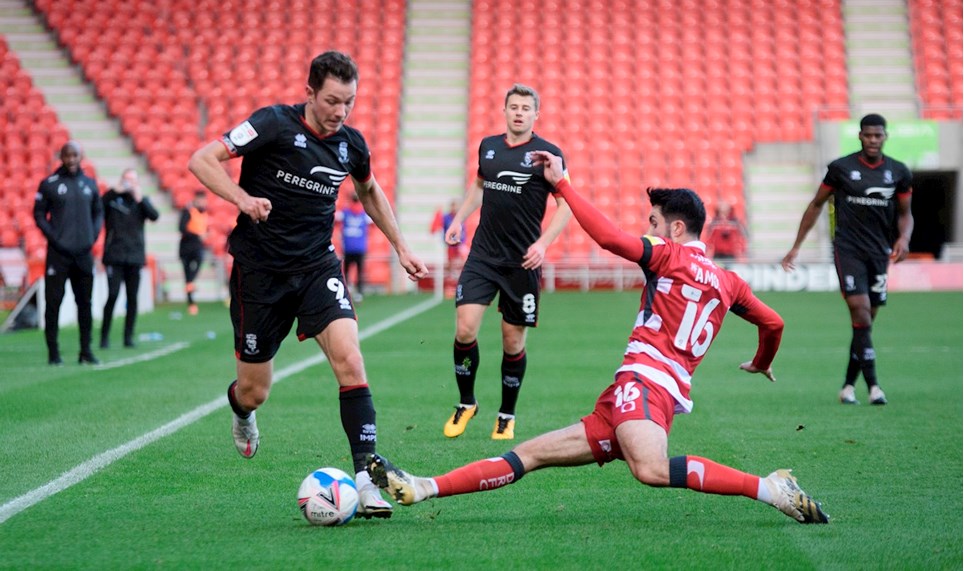 
The Imps slipped to a narrow defeat this afternoon against Doncaster Rovers in South Yorkshire in what was a game of few real chances at either end of the pitch. 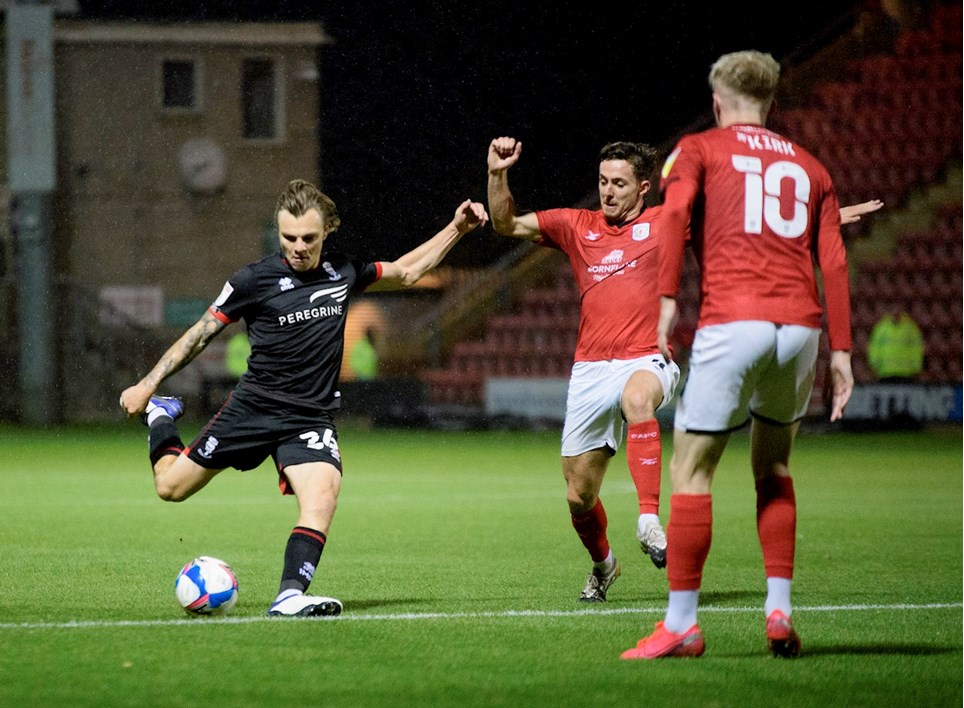