The Imps’ incredible season may soon be coming to a close, but the celebrations are set to carry on as we officially announce details of the city-wide parade for Lincoln City Football Club becoming Champions of EFL League Two.

The parade will take place on Sunday 5 May, starting at 3pm from South Park and making its way through the city on a route that has been greatly extended from the previous parade in 2017.

Just two years on, we are again celebrating another historic season for the club. Building on their previous successes in the National League and winning the EFL Trophy at Wembley in 2018 by being crowned League Two Champions on Easter Monday, gaining promotion to the third tier of English football for the first time in 20 years.

The parade will make its way from South Park up the High Street as far as the level crossing, turning left to go up Wigford Way before travelling along Silver Street.

The coaches will then make their way up Lindum Hill (although this short part of the journey will be conducted at normal vehicle speed and spectators are requested to choose an alternative vantage point) before turning left onto Pottergate and making their way to the north of the city and up Newport, past Bishop’s Grosseteste University and along Riseholme Road. The event will finish at around 4pm, before the coaches reach the A46.

Imps' manager, Danny Cowley, said: “The unwavering support shown by the people of Lincoln has inspired us every day.

“They have played a key role in our success this season, so to be able to celebrate the League Two champions trophy with everyone in and around the city is something that we’re really looking forward to.”

In what is being promoted as a safe, fun, family-friendly event, organisers City of Lincoln Council, in partnership with the football club and Lincolnshire Police, are encouraging everyone who wants to attend to plan well ahead and arrive for the event in plenty of time.

To ensure people’s safety and to also keep traffic in Lincoln moving, road closures will be in place, following the parade along its three-mile route.

A map of the route can be found at: www.lincoln.gov.uk/ImpsParade

Updates will be posted in the run up to the event on the City Council social media pages. In the meantime, let us know if you’re coming using the hashtag #ImpsParade19. 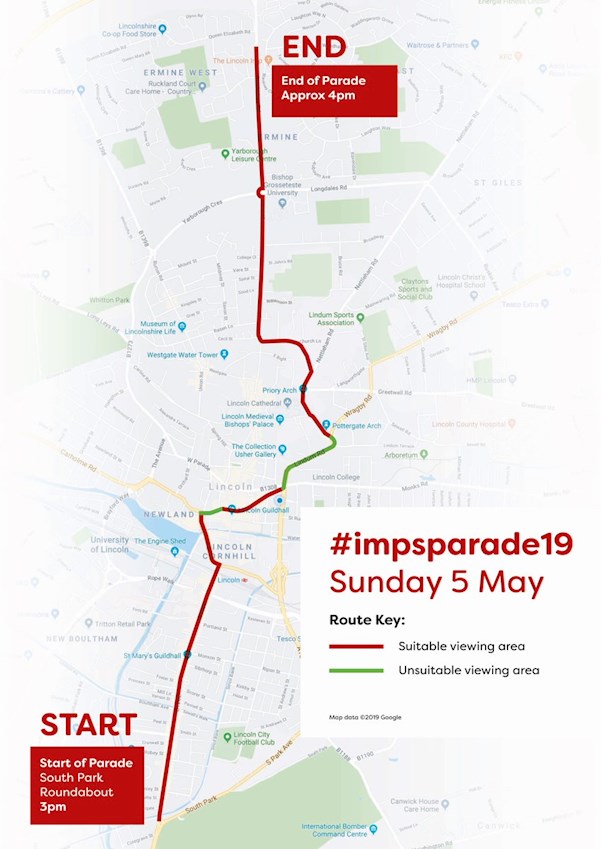