Despite beating Braintree 2-0 on Saturday, City boss Gary Simpson made four changes for this Skrill Premier return game against the Iron at the Amlin Stadium with Arnaud Mendy, Luke Foster and Danny Rowe forming a midfield three whilst Dan Gray slotted in on the right.
Charlee Adams, Alan Power and and the suspended Kris Bright made way with Todd Jordan dropping back in defence in place of Nat Brown. Teenage striker Alex Simmons, meanwhile, was named amongst the substitutes.
As was the case at the weekend, it was a cagey opening to proceedings and although both sides forced corners in the opening stages, the first 10 minutes were a pretty scrappy affair with neither goalkeeper threatened.
Saying that, City were enjoying the better of the possession with debutant Mendy seeing plenty of the ball and after Hamann held a looping Foster header following a Newton free-kick into the box on the quarter-hour mark, the tall midfielder forced a corner which was hurriedly cleared.
In the 17th minute a late challenge on Tom Miller saw referee Dan Cook have words with Dan Holman and when play resumed, Jake Sheridan volleyed wide after some neat build-up play involving Mendy & Ben Tomlinson.
Three minutes later Sheridan then teed up Newton who saw his strike held by Hamann whilst at the other end, Braintree's first attack saw Holman test Nick Townsend with a low drive from 20 yards out.
Some good work from Jordan in the 36th minute saw him break up play before launching a forward ball which Tomlinson won a corner from. Newton duly delivered and there rising high was LUKE FOSTER to plant a firm header into the roof of the net.
Braintree looked for a quick response with Sean Marks drawing a foul out of Jordan close to the corner flag but Audel cleared when the free-kick was played into the box.
City then dealt with a Braintree corner before attacking themselves with Newton winning a throw-in which saw the City full-back have an appeal for hand ball after his drive crashed against a home defender waved away.
The last action of the opening period saw Holman drag a low shot well wide.
HT: BRAINTREE 0 IMPS 1
Whilst the Imps emerged unchanged, there was a switch for Braintree prior to the start of the second half with Dan Sparkes coming on for former City trialist Sam Habergham.
A mistimed challenge by Miller on Mensah saw the City man see yellow less than two minutes after the restart and after a lengthy spell of treatment to the Town man, he was helped off the field by his physio and the Imps' Tomlinson.
Alex Jakubiak came on as Mensah's replacement before Townsend kept out the free-kick when it was fired goalwards. Shortly afterwards, a James Mulley cross landed on the top of the bar and out for a goal-kick.
City's response saw them sweep forward with Paine booked for a challenge on Tomlinson as the Imps' man sprinted forward in support of Sheridan. Hamann then denied Newton after he fizzed in the free-kick from within the 'D'.
Shortly afterwards, Sheridan got the better of Paine only to see his chipped effort over Hamann bounce inches wide of the post. At the other end a neatly worked Braintree free-kick ended up with Rowe blocking for a corner which caused havoc in the City box before Townsend somehow emerged with the ball in his gloves.
A third and final Town change saw Chez Isaac replace Josh Laurent in the 67th minute before Rowe tested Hamann with a rasping 25-yard drive. Braintree's response saw Holman drill a foot wide from the edge of the box.
In the 73rd minute Mendy volleyed wide after a sweeping Tomlinson pass opened up the home defence. Sheridan then forced an unproductive corner after the marauding Newton caused problems for the Braintree back-line.
City remained on the offensive and three minutes later doubled their advantage with a top drawer finish from JAKE SHERIDAN who, after he latched on to a clever pass from Tomlinson, unleashed a first time effort which flew past Hamann and into the top left corner of the net.
A Gray throw-in ended up with Foster firing over as the Imps pressed for a third five minutes after the restart whilst a cynical challenge on Sheridan earned Davis a yellow card with five minutes on the clock.
A late challenge on Mendy saw Sparkes join Davis in the book before Ben Tomlinson made way for teenager Alex Simmons to make his debut. The second generation Imp, following in the footsteps of father Tony, was quickly in the action as he was cautioned for not retreating at a free-kick.
This occurred as the Fourth Official indicated that a minimum of four minutes were to be added on and in the last of these extra minutes Sheridan was denied by a fine Hamann save before he was replaced by Bohan Dixon.
FT: BRAINTREE 0 IMPS 2
LINCOLN CITY
30 Nick TOWNSEND
2 Tom MILLER
5 Thierry AUDEL
27 Luke FOSTER
3 Sean NEWTON
15 Dan GRAY
4 Todd JORDAN
14 Arnaud MENDY
9 Danny ROWE
12 Jake SHERIDAN
11 Ben TOMLINSON
subs
17 Bohan DIXON (for SHERIDAN 90+4)
19 Jon NOLAN
25 Alex SIMMONS (for TOMLINSON 88)
26 Charlee ADAMS
31 David PREECE
GOALS: FOSTER (37), SHERIDAN (76)
BOOKINGS: MILLER (47), SIMMONS (90+1)
BRAINTREE TOWN
20 Nick HAMANN
2 Ryan PETERS
3 Sam HABERGHAM
5 Matt PAINE
8 Kenny DAVIS
26 James MULLEY
23 Josh LAURENT
17 Bernard MENSAH
9 Sean MARKS
10 Daniel HOLMAN
subs
1 Nathan McDONALD
4 Chez ISAAC (for LAURENT 67)
11 Daniel SPARKS (for HABERGHAM h/t)
12 Luke DALEY
27 Alex JAKUBIAK (for MENSAH 49)
BOOKINGS: PAINE (55), DAVIS (85), SPARKES (87)
MATCH OFFICIALS
REFEREE: Dan Cook
ASSISTANTS: Adrian Quelch & Rob Smith
FOURTH OFFICIAL: Carl Pearse
ATTENDANCE: 787 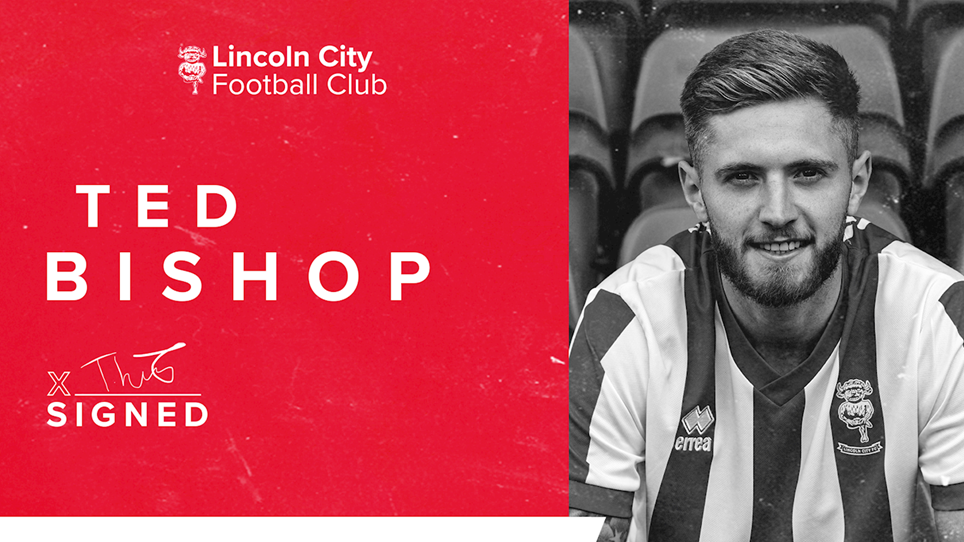 
The Imps have completed the signing of creative midfielder Ted Bishop from Ipswich Town. 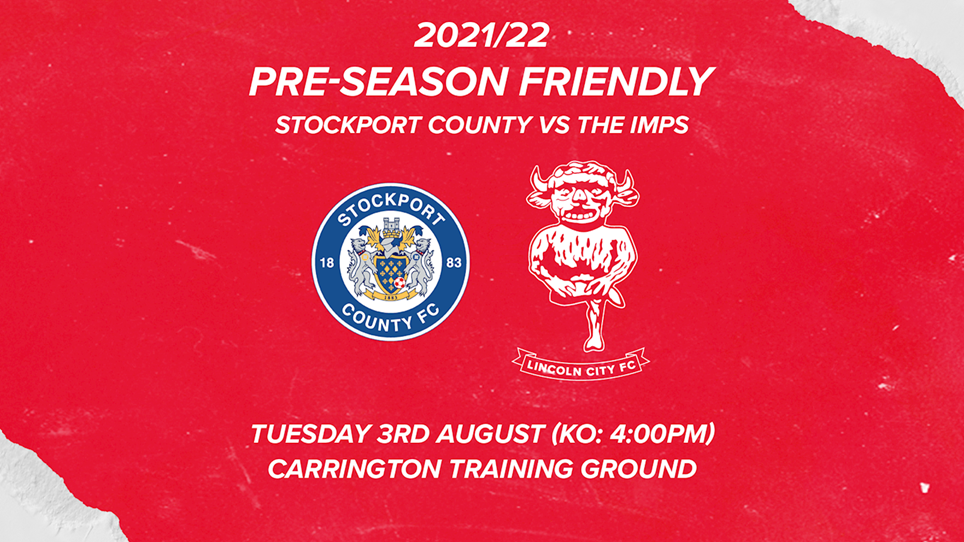 
The Imps have added a friendly at Stockport County to their pre-season schedule. 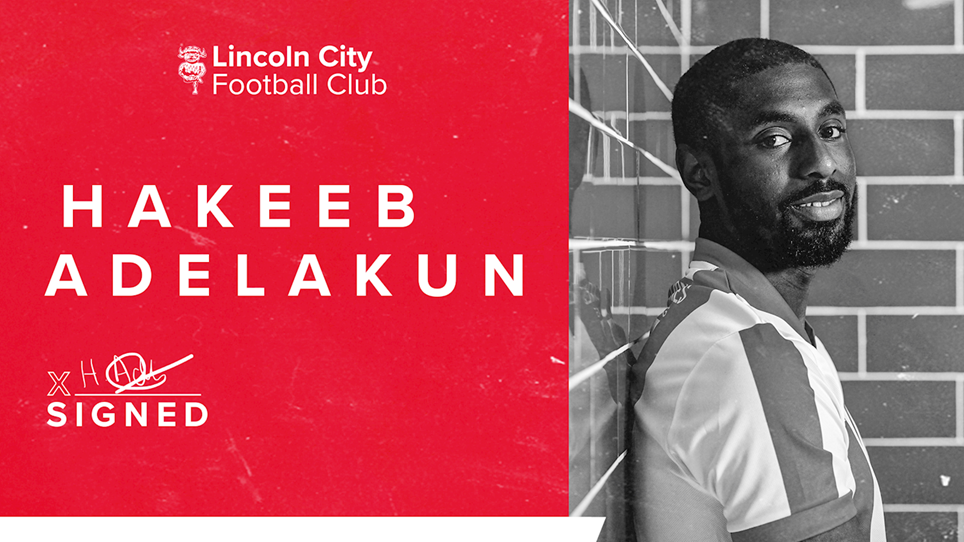 
The Imps have completed the signing of creative winger Hakeeb Adelakun on a long-term contract.