There was one change to the starting line-up for this Skrill Premier game at Salisbury City with Koby Arthur replacing Jon Nolan.
After an impeccable minute's silence to mark the 25th anniversary of the Hillsborough tragedy, play commenced at 3.07pm with the Imps kicking off.
It was a very scrappy opening to the game with neither goalkeeper tested at all during the first 15 minutes; in fact the only action of note came when a questionable offside decision denied Kris Bright a run on goal after he was set free down the middle by skipper Alan Power.
In the 18th minute a head injury to Chris McPhee brought about a break in play and a minute later Arthur took a knock but was able to continue without treatment. A long Tom Miller throw then caused problems for the home defence but they managed to scramble clear.
At the other end a sliced Miller clearance led to a second Salisbury corner but Sean Newton rose well to clear. Another corner quickly followed which Nat Brown dealt with and as the Imps broke forward, Arthur had a shot charged down.
Charlee Adams was booked for a late 39th minute challenge on Stuart Sinclair and three minutes later Power drilled wide from range from what was the Imps' first real effort at goal.
The last action of the half saw Elliott Frear drill a low effort wide for Salisbury in the first of two added minutes.
HT: SALISBURY 0 IMPS 0
Conner Robinson replaced Koby Arthur for the start of the second half and the Imps were the first to press following the restart with good persistence from Sheridan seeing him force a corner but this ended up with Adams volleying well wide after the ball was half-cleared.
The game reverted to type though shortly after with the hour mark passing without further incident but this changed in the 63rd minute when the hosts took the lead; striker Jamie White making the most of some hesitant defending before firing past Townsend at the second attempt after the City stopper blocked his initial effort.
City looked for a quick response with Robinson being crowded out after he was released by Power whilst shortly afterwards Sheridan prodded a Power centre wide.
Midway throught the second half Danny Rowe replaced Arnaud Mandy and he was quickly in the action, drawing a foul out of James Clarke just outside the box. Up stepped SEAN NEWTON to fire home an unstoppable drive which flew into the top
corner of James Bittner's net for the leveller.
A change for the hosts saw Dan Fitchett replace Kevin Amankwaah with 15 minutes on the clock, this coming just before Bright volleyed wide as the Imps pressed for a second.
Rowe then had a shot from range deflect behind for a corner and before this was taken James Clarke went off injured with Ricky Wellard coming on as his replacement.
After the two-goal burst and brief spell of action, the game returned to being a scrappy affair as the clock ticked on. In fact it wasn't until he 85th minute before the next action of note came along with Miller seeing his header from a Newton corner hacked off the line.
At the other end substitute Fitchett had a tame effort easily held by Townsend but in the first of three added minutes it was the Imps who added to the scoring with DANNY ROWE controlling the ball, turning on to his right and drilling clinically past Bittner.
A knock to Foster as the hosts looked to get back on level terms brought about a break in play and he looked to be in some discomfort as he was helped off the pitch by physio Kev Oxby.
Dan Gray came on as Foster's replacement as the clock continued to tick on and when referee Craig Hicks gave the Imps another free-kick, he blew for time when this was pumped forward
FT: SALISBURY 1 IMPS 2
LINCOLN CITY
30 Nick TOWNSEND
2 Tom MILLER
23 Nat BROWN
27 Luke FOSTER
3 Sean NEWTON
26 Charlee ADAMS
24 Arnaud MENDY
8 Alan POWER
7 Koby ARTHUR
12 Jake SHERIDAN
18 Kris BRIGHT
subs
9 Danny ROWE (for MENDY 68)
15 Dan GRAY (for FOSTER 90+4)
16 Conner ROBINSON (for ARTHUR h/t)
19 Jon NOLAN
31 David PREECE
GOALS: NEWTON (70), ROWE (90+1)
BOOKING: ADAMS (39)
SALISBURY CITY
25 James BITTNER
4 Ryan BRETT
5 James CLARKE
6 Glenn WILSON
7 Chris McPHEE
9 James WHITE
10 Theo LEWIS
11 Elliott FREAR
14 Stuart SINCLAIR
30 Kevin AMANKWAAH
31 Charlie SHERINGHAM
subs
8 Ricky WELLARD (for CLARKE 79)
18 Adam FLINT
20 Dan FITCHETT (for AMANKWAAH 75)
1 Willem PUDDY
GOAL: WHITE (63)
MATCH OFFICIALS
REFEREE: Craig Hicks
ASSISTANTS: Marc Whaley & Mark Lucie
FOURTH OFFICIAL: Matt Eva
ATTENDANCE: 952 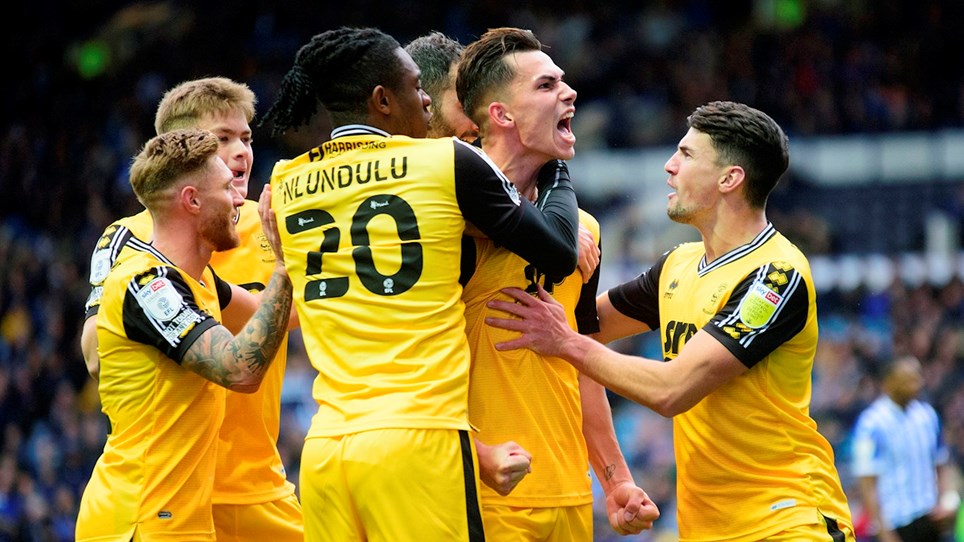 
Lewis Montsma's second goal of the season earned the Imps a deserved point after an impressive battling performance at Hillsborough.


Almost 8,000 people were present as the Imps took on AFC Wimbledon at the LNER Stadium.


The Imps could not find a way past a determined AFC Wimbledon outfit at the LNER Stadium.