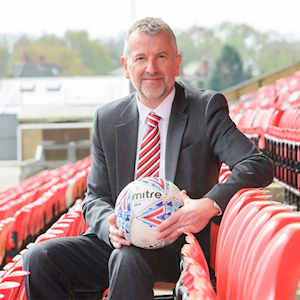 Lincoln-born Roger grew up in Sleaford and has been following The Imps for over 50 years. He became an Associate Director of the club in 2008, and a member of the Academy’s Youth Development Board.

He joined the board as a Director in March 2011 and was accountable to the board for the Academy until 2018. In June 2018 Roger was appointed as the Club's Vice Chairman, though he stepped down at the end of June 2020 but remains as a director.

Roger played an active role in ensuring that the Academy was able to continue during the club’s years in the National League by leading its fundraising efforts.

Roger spent a successful 33-year career in the public sector, primarily working in Human Resources as a personnel manager and HR consultant, before becoming Head of Recruitment for a department of over 100,000 people and later leading a team of over 500 people, with budgets of £30m.

Roger finished his career as a senior manager in a team that created and implemented an organisation that provided recruitment services to the whole of the Civil Service.

A fan for 50 years, Roger first became actively involved with the club and the board during its administration period in 2002, selling copies of the 'Best of Deranged Ferret', the fanzine he founded in 1990, to raise funds for the club.

Before joining the board Roger spent many years as a coach and administrator in local junior football, holding both the Secretary and Chairman posts at Caythorpe and Fulbeck JFC.

All Board members and key investors