Saturday's game will be the first time City have faced Fleetwood Town away in the Football League, with previous meetings coming in the then named Blue Square Premier.

Barton's side go into the fixture having ended Hull City's unbeaten start to the season with 4-1 home victory last Friday. Harvey Saunders continued his goal scoring streak bagging a brace with Callum Camps and Sam Stubbs also finding the back of the net.

Imps boss Michael Appleton discussed the threat Fleetwood Town have going forward and what to expect from Joey Barton's side in tomorrow's clash.

"We will look to stop the supply chain to the forwards," explained the Gaffer.

"That won't be easy because they have good experienced midfield players at Fleetwood. We will look to stop them early and deal with the threat. It will be a good game for us to judge our performance and see how we handle them.

"That will give me a better idea of where we could end up at the end of the season."

Appleton added comment about the Fishermen's last match against Hull: "The way their game went last week is probably what most people expected from them this year, they had a fantastic season last year and are a good side who will do well."

Joey Barton has brought in a mixture of young and experienced players over the summer. The most notable experienced head being Charlie Mulgrew who joined the Fishermen from Blackburn Rovers.

Mulgrew has 453 professional appearances to his name, winning five Scottish Premiership titles with Celtic as well as winning promotion from League One with Blackburn Rovers in 2018.

Callum Camps has impressed for Fleetwood since arriving at Highbury over the summer, scoring five goals in nine competitive appearances. The 24-year-old spent seven years with Rochdale as a professional before making the move to Town.

Young centre back Sam Stubbs is another name through the door with the 21-year-old signing for Fleetwood from Middlesbrough. Stubbs has gained first team experience in recent years on loan with Notts County, Hamilton and ADO Den Haag.

Fleetwood have also signed a number of players on loan including Liverpool's Morgan Boyes, with the defender experiencing first team football for the first time. Experienced names Barrie McKay and Tom Edwards make up the remaining loan signing names.

Imps supporters can watch all of Saturday's action LIVE on WeAreImps iFollow with a video match pass, get yours here NOW!

The Imps picked up a valuable point on the road in a pulsating encounter at Highbury this afternoon.

It was an enthralling game which had plenty of action and was full of commitment from both sides, City arguably had the better opportunities with home ‘keeper Jason Leutwiler having to make a number of key saves in the second half in particular. It was a real example of quality football in League One and the only thing it was a missing was a goal.

The home side applied the pressure early on, closing down quickly and looking to go quite direct to the experienced front pair of Paddy Madden and Ched Evans in an attempt to turn the City defence towards their own goal but Alex Palmer wasn’t called into action.

After no real opportunities in the opening few minutes things burst into life with two chances in as many minutes, first The Imps were closest to getting in front as TJ Eyoma fed the ball into the feed of Harry Anderson on halfway who raced forward to the edge of the home area and played in James Jones, the City number eight tried to place his ball in at the far post only to see the ball roll agonisingly inches wide.

Fleetwood’s Harvey Saunders was then denied by Palmer who raced from his goalline to deflect the ball away on the edge of the box, however his forward momentum took him into the Fleetwood man but there was no hesitation from the officials who only acknowledged the Imps’ number one had connected with the ball.

It was a real battle in midfield, with the home side looking to the experience of Glenn Whelan and Paul Coutts but for all their possession there was little in terms of danger inside The Imps’ area. Conversely, City were positive and purposeful on the ball, Brennan Johnson cut in from the left before smashing a low drive which was diverted by a Fleetwood defender, then Anderson forced Jason Leutwiler into a smart stop at his near post highlighting the threat posed on the break by Michael Appleton’s men.

Callum Camps fizzed one wide from distance as the hosts were still struggling to make a break through, whilst The Imps returned fire as Jones to volleyed on the swivel that flashed over the top. Tayo Edun was next to fashion a chance for City, his deep cross to the back post was sidefooted on target by Anderson but Leutwiler was right down the barrel of it to save.

Fleetwood had their best chance just ahead of the break, a lung busting burst down the right from Wes Burns created a crossing chance, Paddy Madden met it only to see his looping header thump off the top of the crossbar before being cleared to safety.

City started brightly with Johnson really getting into the groove, he was showing his quality on and off the ball, his movement being a real feature as well as bringing the first chance of the second half as he cut in front the left to smash a shot that Leutwiler had to tip over the top. Fleetwood then had Burns to thank as Anderson was inches away from finding Johnson as The Imps almost went from one end of the pitch to the other in a matter of seconds.

Jones and then Anderson and Tom Hopper were all denied by Leutwiler as Michael Appleton’s men piled on the pressure.

Joey Barton made two changes to his side just after the hour mark to try and break free of what had been a real period of dominance for the visitors. The change did bring a break of pressure in terms of chances inside the Fleetwood box, City continued to hold a lot of the possession with the home side seemingly growing increasingly frustrated. Tackles began to fly in, the game was opening up a little and the pace intensified but the deadlock remained unbroken.

Lewis Montsma and Josh Morris clashed competing for an aerial ball which brought a moment of respite from the hectic ten minutes or so of the game as both players needed assistance. Following the restart Morris created what was the home side’s first real opportunity of the second half, clipping the ball to Ched Evans at the back post but his header back across goal was watched confidently wide by Palmer in the City goal with ten minutes remaining. Fleetwood dug deep to push for an unlikely winner but The Imps positional sense and strong foundations weren’t to be ruffled.

Sub, Anthony Scully and Jones combined to almost create a chance as it was City who then took their turn pushing for their opportunity, but the Irishman’s low cross was well held at the near post by Leuwiler. Evans won a late free kick for the home side which presented Charlie Mulgrew with a chance from a free kick but Palmer cooly, watched the ball right into his grasp. Leutwiler again was to keep the scores level as Scully then hit a low shot on target, with the game deep into injury time. 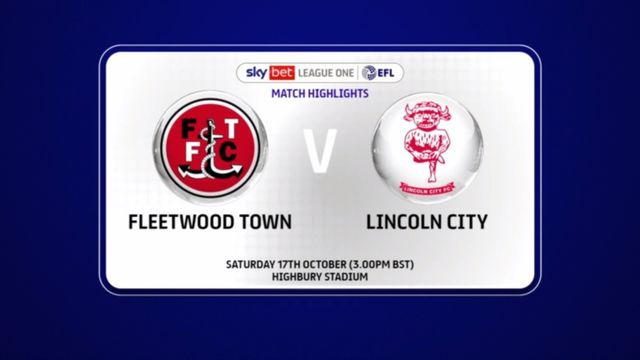 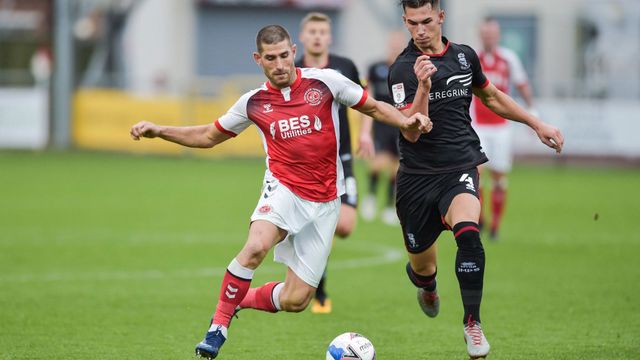