The Imps were defeated 3-1 at The Valley as goals from Stockley, Inniss and Aneke were enough to ensure Charlton Athletic picked up the points. Harry Anderson scored a late consolation goal, but the match ended in a rare away defeat for Lincoln City.

Michael Appleton named three changes from the team that drew with Peterborough United at the weekend with Tayo Edun, James Jones and Callum Morton returning to the side. There was also a welcome return for Joe Walsh who was fit enough for a place on the bench following his recent injury.

City in their all black away kit started confidently at The Valley with good spells of posession as they looked to play their way through the thirds and when Charlton gained posession, they looked to move the ball forward quickly. The first real opportunity of the game didn't arrive until the 11th minute and it was an excellent chance for Callum Morton to open the scoring. The man on loan from WBA timed his run to perfection following a magnificently executed reverse pass from Tayo Edun, but the centre forward saw his shot well saved by the foot of Ben Amos in the Charlton goal.

Harry Anderson then showed a terrific piece of skill to nutmeg Ben Purrington and as the City winger tried to break away from his man, the Charlton left back dragged him to the ground and went into the referees notebook.

Cohen Bramall was booked for a late tackle on Liam Miller shortly afterwards, as the Rotherham forward looked to capitalise on a mistake at the back, but the resulting free kick did not trouble the Imps. Chances were few and far between as we approached the half hour mark with both sides appearing to cancel each other out down in London, and in the 30th minute, the man in the middle picked up an injury and had to be replaced by the fourth official.

The Addicks' first shot of the game arrived in the 33rd minute as a corner was cleared by the Imps but only as far to Ben Purrington who struck from distance, but his effort flew high and wide into the stand. Liam Miller had Charlton's best chance of the game as he cut inside his man from the left wing, but his curling effort flew over the cross bar as Alex Palmer remained untroubled.

Both teams created half chances as the half time whistle approached but Charlton and Lincoln went in level.

Charlton Athletic made an attacking substitution at half time with Chuks Aneke replacing Ben Purrington and the number 9 made an instant impact. A ball into the City box was headed down by Chuks Aneke into the path of Jayden Stockley, who finished smartly with a left footed half volley into the top corner.

The Imps created a great opportunity of their own straight after the opening goal as Callum Morton was played through, but Ben Amos did well to smother at the feet of the centre forward. Alex Palmer was called into action in the 54th minute as Albie Morgan won posession before driving at the City defence. The midfield man laid the ball off to Chuks Aneke who forced a smart diving save from the Imps' number one.

Anthony Scully picked up an injury in the 57th minute, as Remy Howarth came on to replace the former Irish U21 international.

Max Sanders was given an opportunity from the bench as he replaced Cohen Bramall who was on a booking, which meant Tayo Edun reverted to left back.

Addicks striker Jayden Stockley almost doubled the lead as danger man Liam Miller shifted the ball onto his right foot and crossed to the former Exeter City marksman, but his header flew wide.

The home side were on top in this second period and they made it 2-0 on 65 minutes as centre half Ryan Inniss headed in at the back post following a deep corner from Liam Miller. Within two minutes, it was 3-0 to Charlton Athletic. Liam Miller again caused problems down the left wing and his pull back was met by Chuks Aneke who side footed into the net via a deflection.

Tom Hopper and Joe Walsh entered the field with 20 minutes to go as Lincoln City looked to get a goal back in this fixture.

Hopper was a willing runner as he was slipped in by James Jones. The number 9 rounded the goalkeeper but couldn't quite get a shot off under pressure from the Charlton defence and the home side cleared.

The Imps picked up a consolation goal in the 89th minute as Harry Anderson latched onto a Tom Hopper cross. The winger calmly steered his right footed shot into the bottom corner.

The Imps' were still creating chances as Hopper had a couple of half chances after a great cross from Regan Poole, put Amos made a smart stop at his near post.

The game ended 3-1 to the home side and Lincoln City will be looking to bounce back on Sunday when AFC Wimbledon visit LNER Stadium, before the Sky Bet League One play offs await. 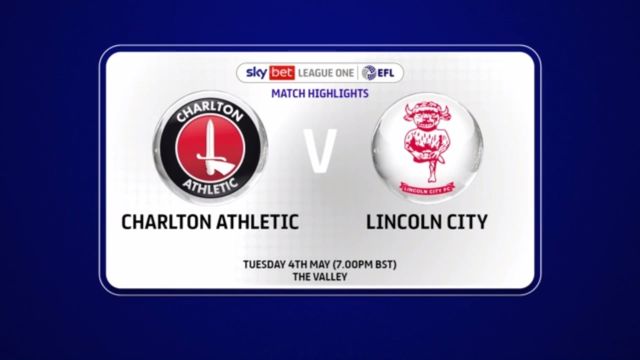 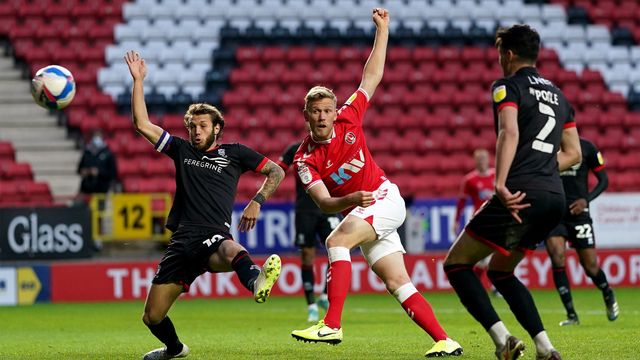