The Imps and Swindon Town shared the points at LNER Stadium following a 2-2 draw. City came from behind twice in this match to pick up the point following goals from Jorge Grant and Morgan Rogers.

The away side took the lead in the 2nd minute of the match with the first attack as Jordan Garrick struck a half volley with his left foot, which beat Alex Palmer from 10 yards out. The goal arrived as Dominic Thompson sprinted down the left wing, before his cross was met by Swindon’s number 11 who made it 1-0 to the visitors.

Conor McGrandles had the first opportunity for the Imps as he won the ball in midfield before driving at the Town defence, but his right footed effort from range was held by Jojo Wollacott in the visiting goal.

City responded well to going behind as Brennan Johnson rode two challenges before playing the ball left for Morgan Rogers, but his left footed drive didn’t trouble the away side.

The Robins had a sighter at goal in the 20th minute as Scott Twine picked up the ball from distance before hitting a right footed shot towards goal, but Alex Palmer was well positioned to make a comfortable save. 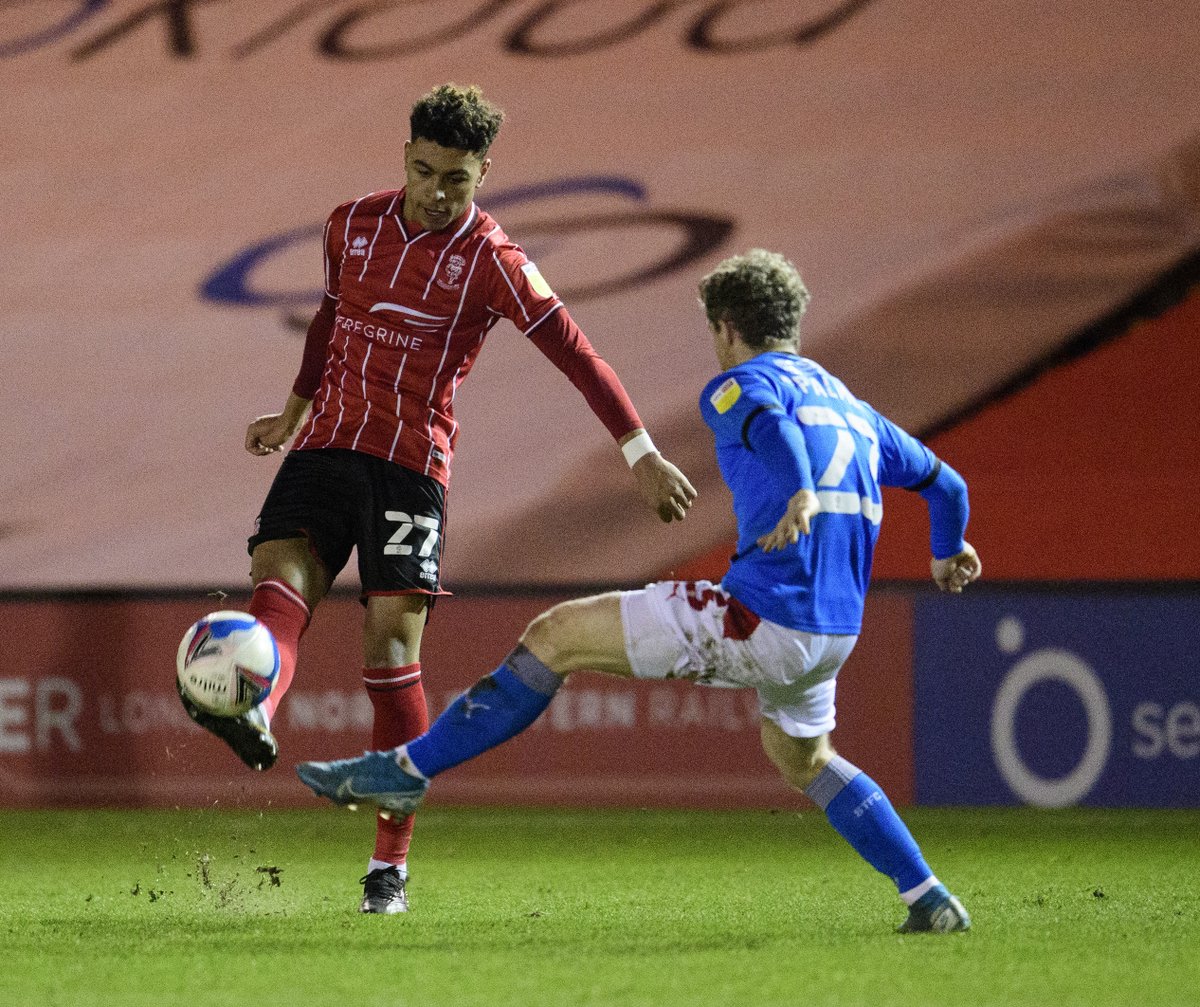 City won themselves a penalty in the 26th minute of the match as Morgan Rogers played a delightful through ball with the outside of the boot to Brennan Johnson who was tripped in the area, and the referee rightly pointed to the spot. Captain Jorge Grant stepped up confidently and sent Jojo Wollacott the wrong way with a nicely despatched penalty kick to make it 1-1.

The Imps continued to press after the equaliser as half chances arrived for Tom Hopper, Lewis Montsma and Anthony Scully but Swindon cleared their lines on each occasion.

As the half hour mark approached, Anthony Scully was so close to firing the Imps in front as a lovely through ball from Jorge Grant was latched onto by the Irish U21 international, but he couldn’t quite direct his effort goal wards.

The away side were then inches away from taking the lead themselves as Brett Pitman was found in space with the goal at his mercy but Alex Palmer rushed to the feet of the centre forward who dinked the ball onto the top of the crossbar, and the ball bounced behind.

The chances were starting to arrive for both sides and in the 40th minute Morgan Rogers was close to scoring. He picked up the ball on the edge of the box before hitting a curling effort at goal, but Jojo Wollacott produced a good save to his left before the Robins cleared. 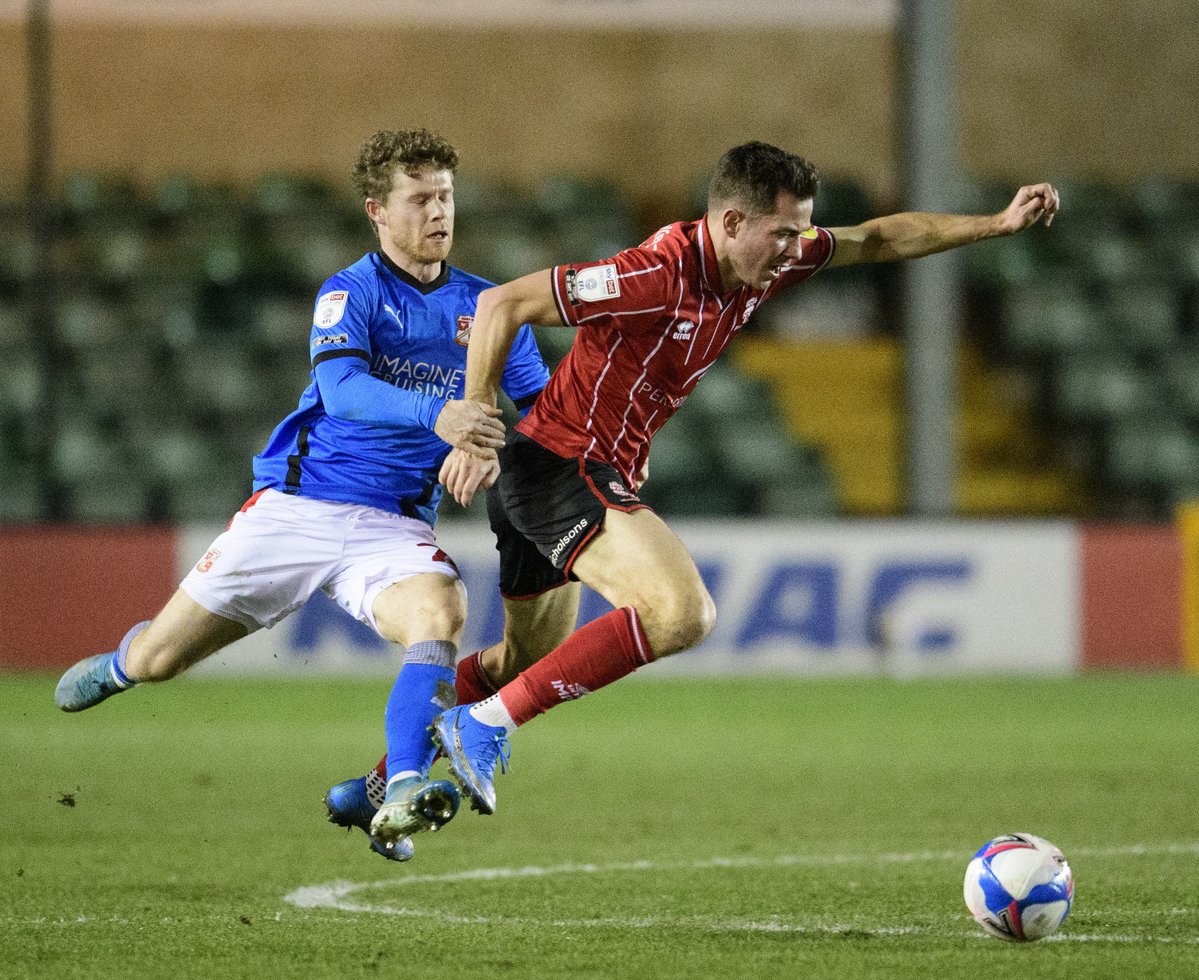 The visitors retook the lead in the 44th minute of the match against the run of play following a mix up between Alex Palmer and the defence. The Town side pressed the goalkeeper before Brett Pitman got a shot away on goal which nestled in off the post.

Both sides had great chances in the opening period of the second half as Anthony Scully came close to getting on the end of a cross, before Brett Pitman had an audacious attempt from range, but Alex Palmer tipped his effort over the bar.

The wind was causing issues for both sides this afternoon with the ball swirling around constantly. Tayo Edun entered the field in the 56th minute in place of Cohen Bramall as Michael Appleton's men searched for the equalising goal.

The visitors who were also fighting hard for the points were defending well as the Imps started to raise the tempo but a moment of magic from Morgan Rogers levelled proceedings in the 59th minute.

Neat play down the left from Tayo Edun and Conor McGrandles led to Morgan Rogers picking the ball up before driving at the Town defence. The visiting defence stood off the England youth international before he unleashed a right footed shot from distance which flew past Jojo Wollacott in the Swindon goal to make it 2-2. 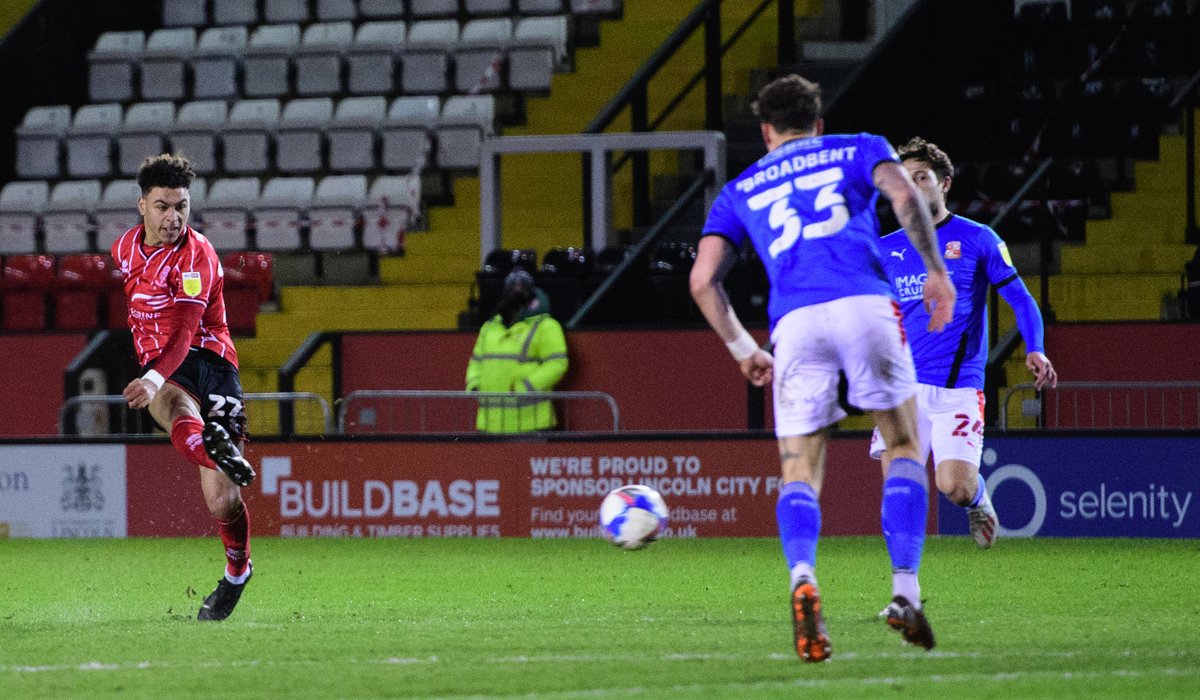 Lincoln City started to dominate the match and the home side almost took the lead as great hold up play from Tom Hopper presented Anthony Scully with a crossing opportunity, but his ball in whistled across the goal line with no City player able to convert. 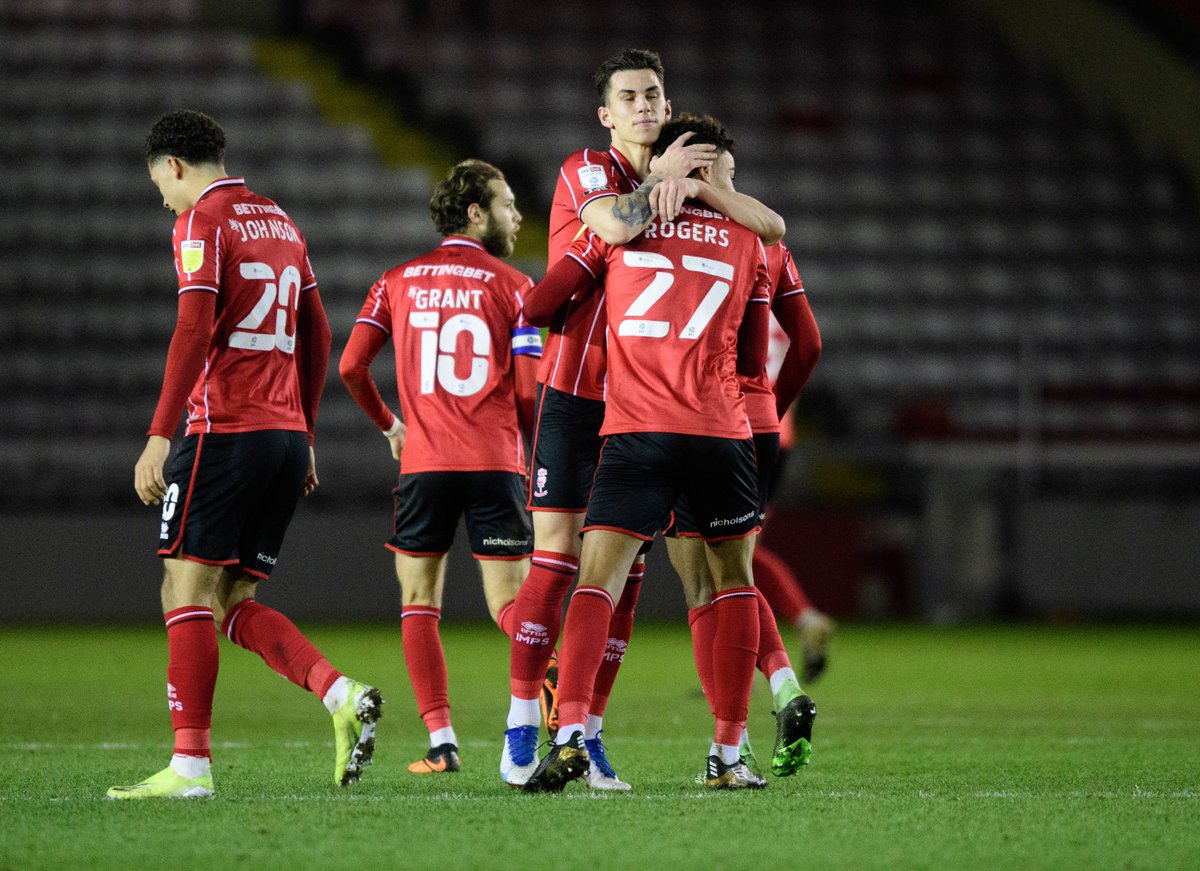 Swindon Town almost scored shortly afterwards through Scott Twine. Former Imps player Jack Payne was fouled on the edge of the D, before the Robins' midfielder forced a diving save from Alex Palmer.

Both teams looked like scoring when they broke forward as City came closest next. Brennan Johnson burst down the right before whipping a low ball into the area, but Tom Hopper couldn't quite get a toe to the ball as Swindon were let off.

Brett Pitman stung the palms of Alex Palmer with a free kick from 20 yards but the Imps' number one was equal to the attempt as both teams were in search of a winning goal.

A well worked short corner from Lincoln caused problems for the Swindon defence as Jorge Grant's pull back fell to James Jones, but his drive flew over the cross bar.

Swindon were still a threat on the counterattack as Jordan Garrick burst forward before Adam Jackson got across to make a terrific sliding challenge as the ball flew behind for a corner which came to nothing.

City looked lthe most likely to net the winner here at LNER Stadium in the closing stages of the match but Swindon Town hung on to secure a point. 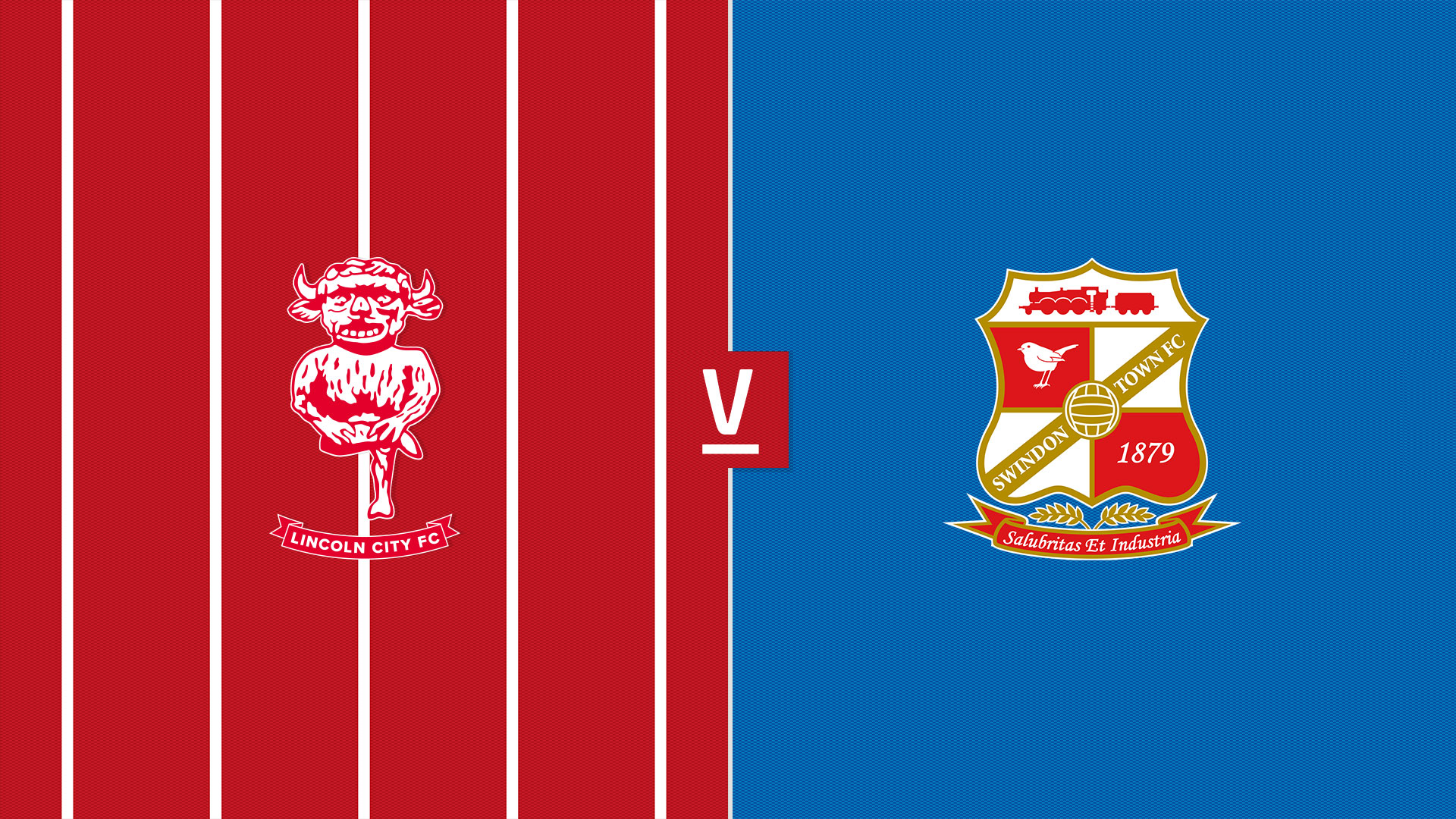 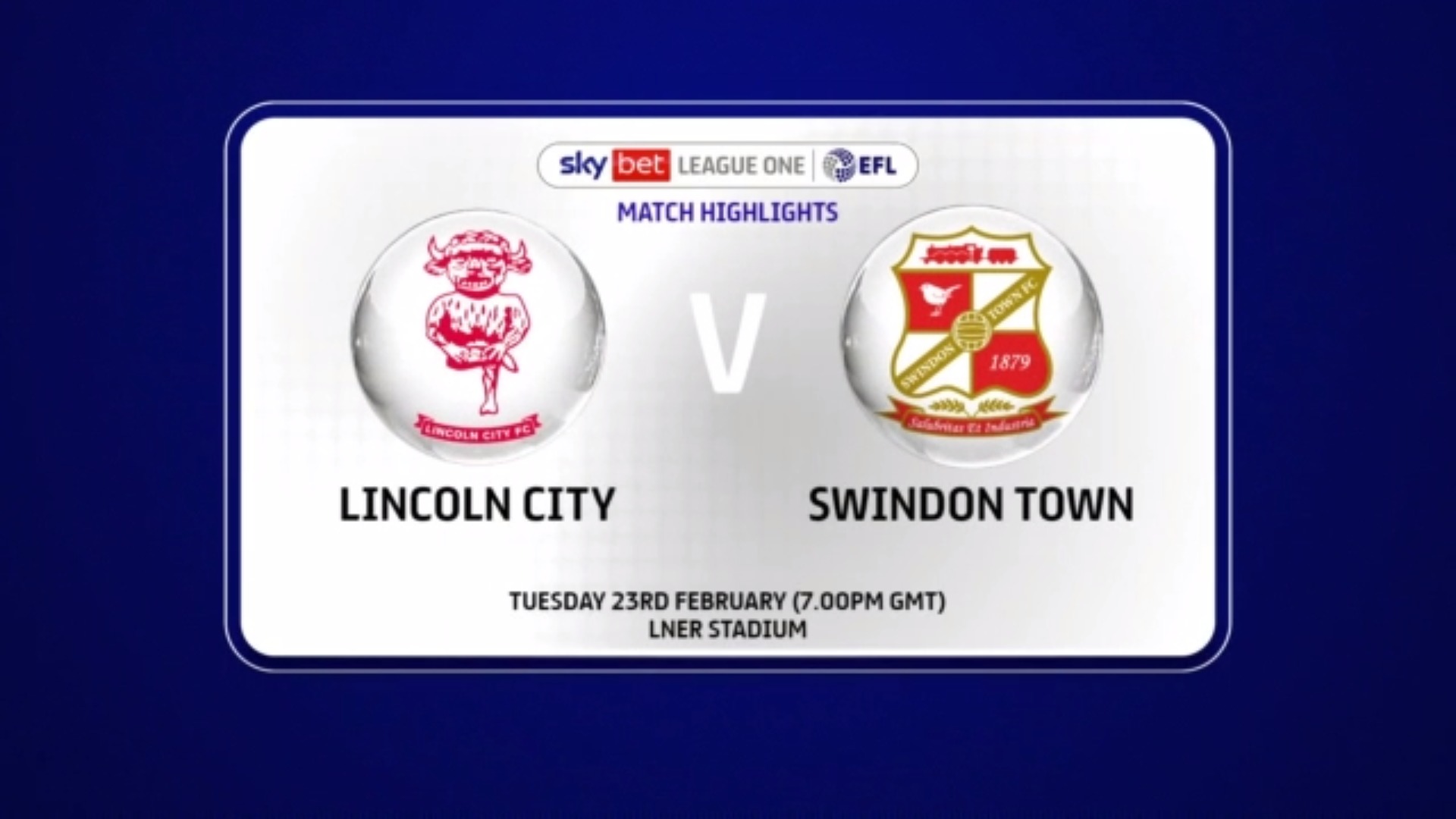 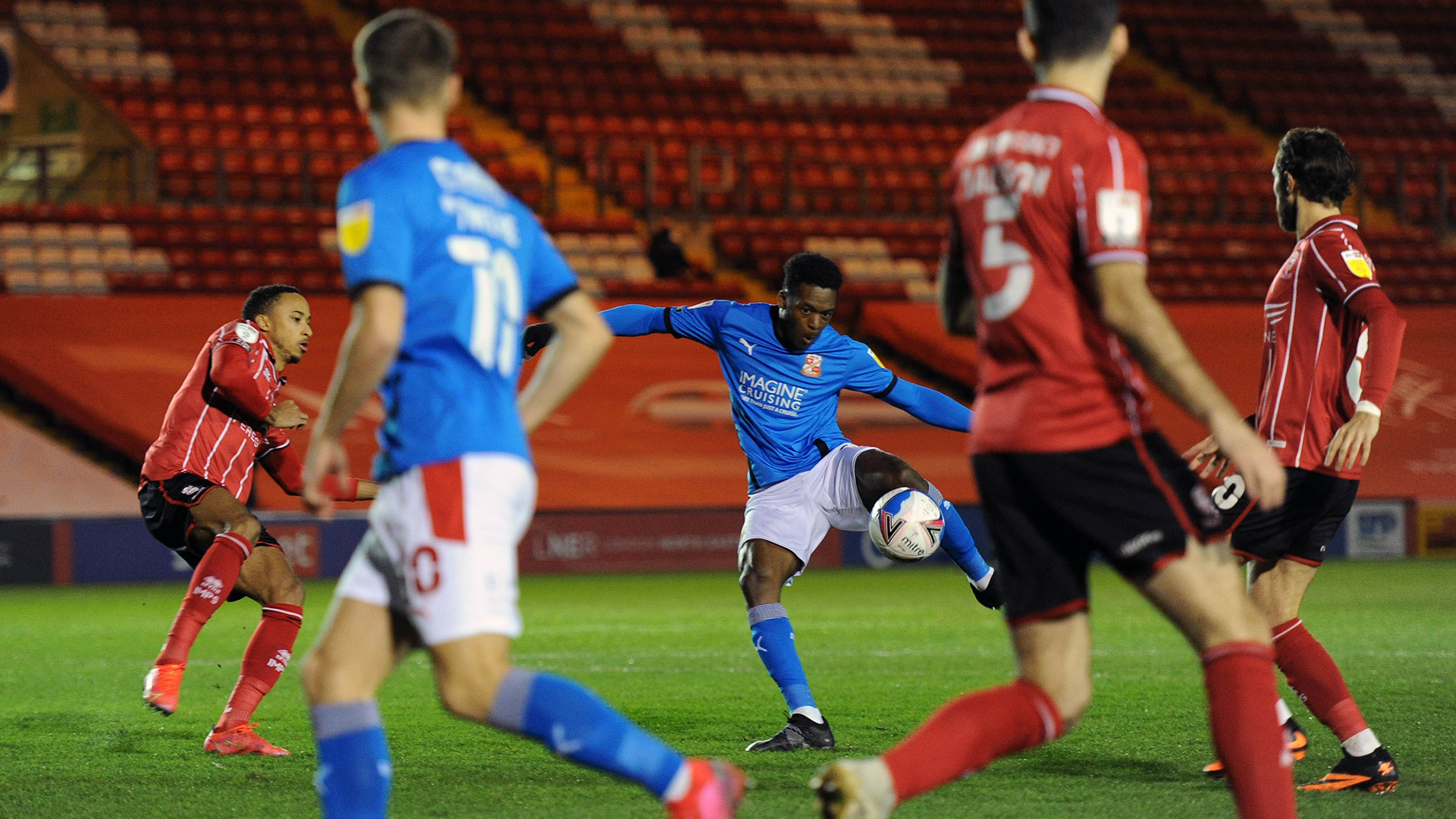