The Imps were beaten for the second game in succession at Sincil Bank this afternoon as Oxford United ran out convincing winners.

Tariqe Fosu was the headline grabber for the visitors as he went home with the matchball after scoring a hattrick for Karl Robinson’s side. Fosu struck twice in the first half before Jamie Mackie and James Henry netted early in the second half for the visitors, Fosu scored his third midway through the second half before substitute Matt Taylor rounded out the scoring for the away side.

The Imps went into the game unchanged from the side which drew with Rochdale in midweek, however Jorge Grant returned to first team action after recovering from injury that saw him miss the last two SkyBet League One fixtures.

Oxford made one change from their last outing, experienced striker Jamie Mackie came in for Matt Taylor who dropped to the bench. A familiar face was also in the starting line-up for the visitors, former Imp Rob Dickie took his place in the heart of the U’s defence. 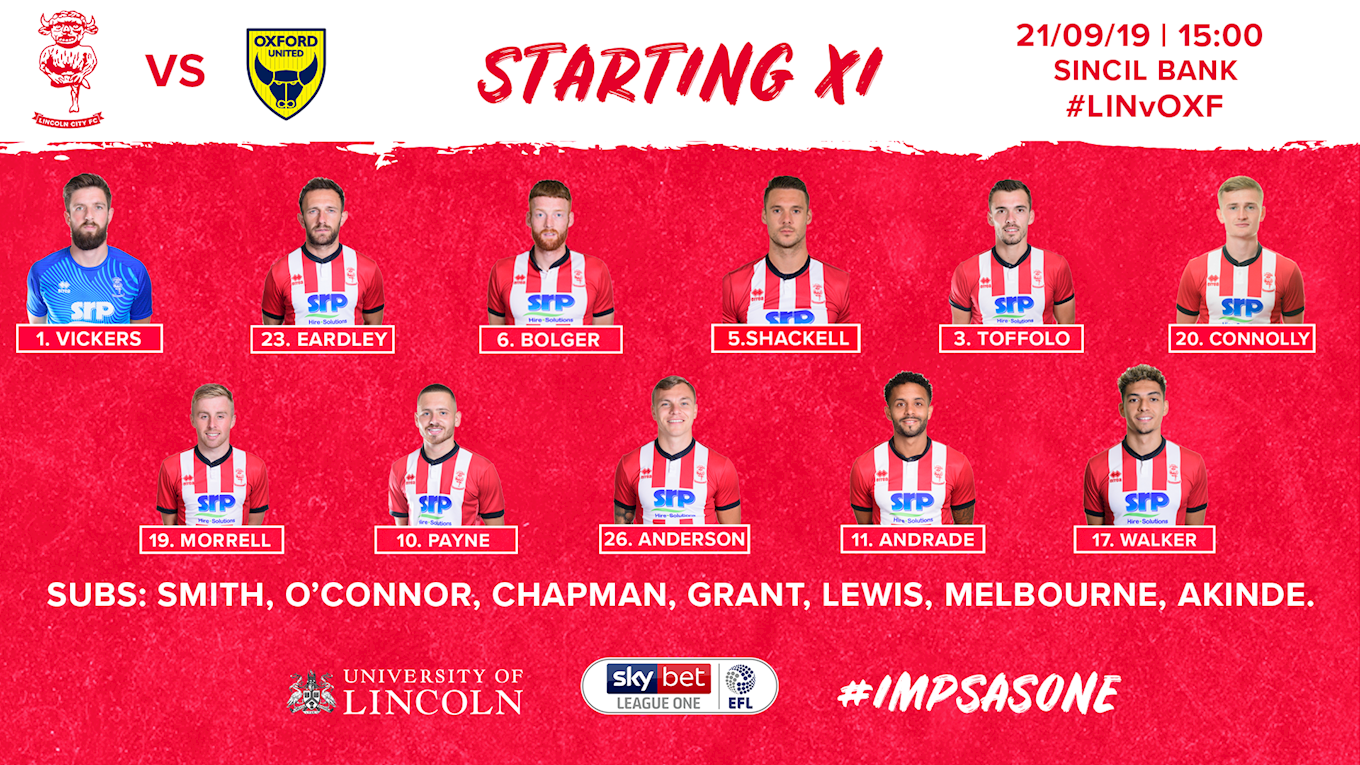 Under bright late September sunshine, the game got underway and was initially a very even affair but the visiting side snatched an early lead with the first shot of the game, Tariqe FOSU hit a speculative effort from the edge of the box low towards the bottom corner and it squeezed into the net. The Imps were almost level within a minute, Bruno Andrade overlapping on the left and beating Chris Cadden to strike a low cross which flashed across the face of goal and within inches of being touched home by both Tyler Walker and Harry Anderson who were racing in at the back post.

City continued their positive pursuit of a goal, Joe Morrell, Neal Eardley and Jack Payne all getting into advanced positions but found a robust United defence in the way. The Imps were beginning to monopolise possession for a spell, Walker was a whisker away from connecting with a low Andrade centre, but was marshalled off it by Dickie at the near post. Meanwhile the U’s were aiming to hit back on the break, James Henry hitting one from distance that deflected over the top and from the corner, Cameron Brannigan hit a bouncing, skidding effort that Josh Vickers saved superbly well, grasping possession ahead of Jamie Mackie who was waiting to pounce.  Ben Woodburn grazed the post as he tried his luck for the visitors, the complexity of the game had changed somewhat as Karl Robinson’s side were having their proverbial moment in the sun in possession midway through the first half but they couldn’t extend their advantage in the game.

The Imps stemmed the flow of the U’s attacks and were close again to creating the goalscoring chance, this time Harry Toffolo and Andrade combined to rob the ball from Dickie on the left, with the City full back then putting in a cross towards Walker that was just prodded away from the striker at the last just as he shaped to shoot.

The visitors snatched a second goal in the 40th minute, a ball down the right flank in behind the City defence from Woodburn was chased by FOSU, Vickers came out to narrow the angle but the U’s number eleven slid the ball beyond him and into the goal.

The Imps were close to reducing the arrears almost immediately, Anderson forcing Simon Eastwood into a stop at his near post as the home side did all they could to hit back ahead of the break.

City made a double change ahead of the second half getting underway, bringing on Jorge Grant and John Akinde for Grant and Anderson to add a new complexity to their attacking options and give Oxford a different type of attacking option to fend off. But like the first half, the opponents struck first with deadly accuracy, MACKIE taking the ball to the City defence before clipping a precise finish in off the far post.  The Imps weren’t showing any signs of being crestfallen though and it was highlighted by Grant who showed fantastic skill to fool three U’s defenders on halfway before sliding the ball into the feet of Walker who got two shots away in quick succession but they were well blocked.

The home supporters were doing their best to lift the players even further but there was little they could do as James HENRY found space to thump in a fourth for the visitors from inside the box.

Andrade clipped in a cross to the near post which was well held by Eastwood at the near post as he continued to be an outlet down the left for the Imps, but the visitors were to score a fifth though FOSU who netted his hattrick and scoring with a looping effort from 25 yards that dipped into the top corner giving Vickers no chance.

The home supporters were still in fine voice despite the scoreline, but they couldn’t urge the side forward to what would be a consolation goal as the visitors struck for a sixth and final time through sub Matt TAYLOR scoring from close range in front of the travelling Oxford supporters.