City need a win tonight to be in with a chance of progressing to the knock out stages of this season’s Leasing.com trophy. Meanwhile, our visitors to Sincil Bank this evening Rotherham United, need to leave Lincolnshire this evening with a point from the game to go through into the hat for the next round.

The Imps defeated The Millers early this season as City visited South Yorkshire in the first away game of the SkyBet League One campaign and are aiming to replicate that by picking up three points again this evening in the Leasing.com Trophy. Paul Warne’s men have won one and lost one so far in this season’s competition and Rotherham need at least a point to unseat Doncaster Rovers from second place in the group so things are shaping up to be very interesting this evening in what promises to be an exciting clash.

City boss, Michael Appleton says his players will be ‘chomping at the bit’ to get the best possible opportunity to put the side with the best chance of progression with the only thoughts being on victory. Tickets are available to purchase tonight from the Club store at Sincil Bank or if you can’t get to the game, you can keep up with all the action and watch LIVE via WeAreImps iFollow for just £10, with full commentary coming from BBC Radio Lincolnshire – For details click HERE

Rotherham have picked up three wins from their previous five games before heading over to Sincil Bank tonight, they progressed to the FA Cup second round at the weekend after coming from behind to defeat Maidenhead United, setting up another clash with non-league opponents in the shape of Solihull Moors.  However, they were to suffer a blow when experienced defender, Richard Wood picked up a hamstring injury and had to be substituted before half time.

Prior to that The Millers tasted victory on the road at The Imps’ upcoming opponents this weekend, Gillingham, and City’s opponents last time out Ipswich Town. However, sandwiched in between those road trips was a defeat to Wycombe Wanderers.

Paul Warne told the club’s official website that he will make a number of changes for the game against City this evening, although it isn’t an indication as to their intentions as they are fully focussed on getting the result needed to progress through to the next round.

“I'm going to freshen the team up. Obviously, we have another big game at home to Accrington on Saturday and the game last weekend on a heavy pitch which took a lot out of them so I'll be introducing some new faces to the group tonight.

“We want to win the game and if we go behind, you'll see me looking to make changes to the team to try and win the game. We'll prepare for the game as we always do and there is no football team in the world that goes into a game wanting to lose and we'll be no different ahead of tonight.”

The Imps defeated Rotherham United this evening in the Leasing.com Trophy at Sincil Bank but it wasn’t enough to see them progress through to the second round.

Needing four goals to go through ahead of Doncaster Rovers who occupied second place in Northern Group H, the home side certainly gave their all to make it possible going into a quickfire two goal lead in the first half.

John Akinde slotted home a brace, the first from the penalty spot before a second just two minutes later from the edge of the box giving City hope. The score remained unchanged until deep into the second half as The Imps bagged their third of the game from the head of sub, Tyler Walker with just two minutes of normal time remaining. However the visiting side didn’t buckle for a fourth time on the evening and City go out due to scoring less goals than Rovers by virtue of 6-4.

Michael Appleton welcomed a number of vastly experienced faces back into his starting XI this evening as Lee Frecklington, Ben Coker and Tom Pett were on the teamsheet ahead of kick off for the first time this season.

Coker came in to make his debut in a City shirt following his move to the club on a free transfer in late August, meanwhile Frecklington returned after last appearing for The Imps on the day the club sealed promotion to SkyBet League One in April to face his former club for the first time since his return to Sincil Bank in January 2018.  Pett makes his second appearance of the campaign, but it was his first start after an injury picked up in pre season put paid to his prospects of starting the season on a high. 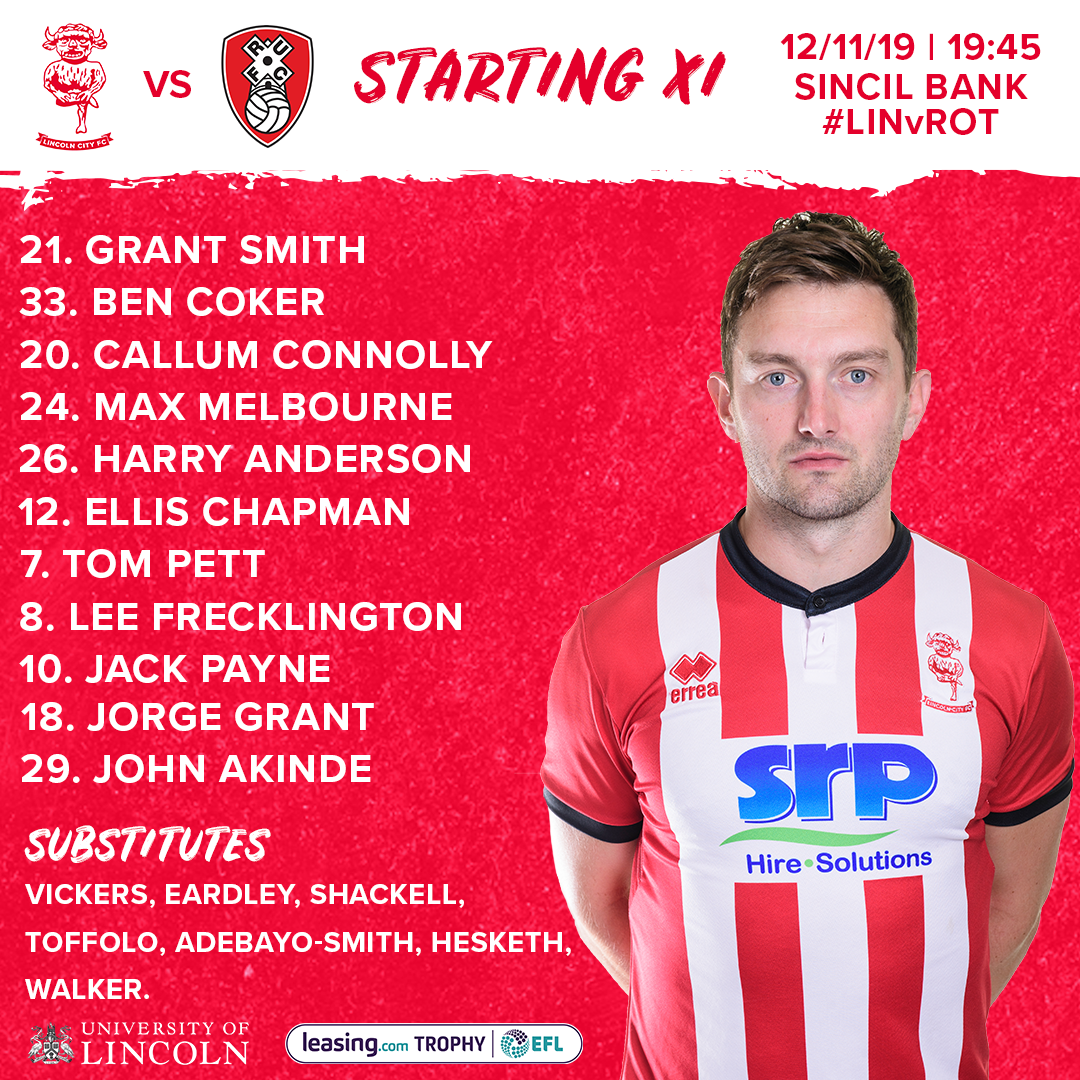 The game got underway with a brisk wind blowing around the stadium, and the visitors were the first to try to take advantage of the conditions, Freddie Ladapo hit a long-range effort which didn’t trouble Grant Smith as it carried with the wind high and over the bar.

Lee Frecklington was the first to try one in anger for City, Harry Anderson’s long through was met by John Akinde, the big striker nodded it down for Frecklington to hit a shot on the half volley but it bounced wide of the mark.

Both teams were sizing each other up, but the breakthrough came when Akinde and Tom Pett linked to deadly effect. Pett burst into the box onto a flick from Akinde over the top of the Rotherham defence and the City number seven was sandwiched off the ball by two Miller’s defenders and the referee pointed to the spot. Up stepped AKINDE to confidently smash home the spot kick to put The Imps into the lead. That lead was doubled within a couple of minutes as AKINDE struck again, the striker latching onto a neat move involving Coker and Jorge Grant down the left before smashing home with aid of a deflection beyond a helpless Lewis Price in the Miller’s goal. Anderson was close to making it three in six minutes as he hit a rasping drive just wide of goal as the visitors looked shell-shocked. 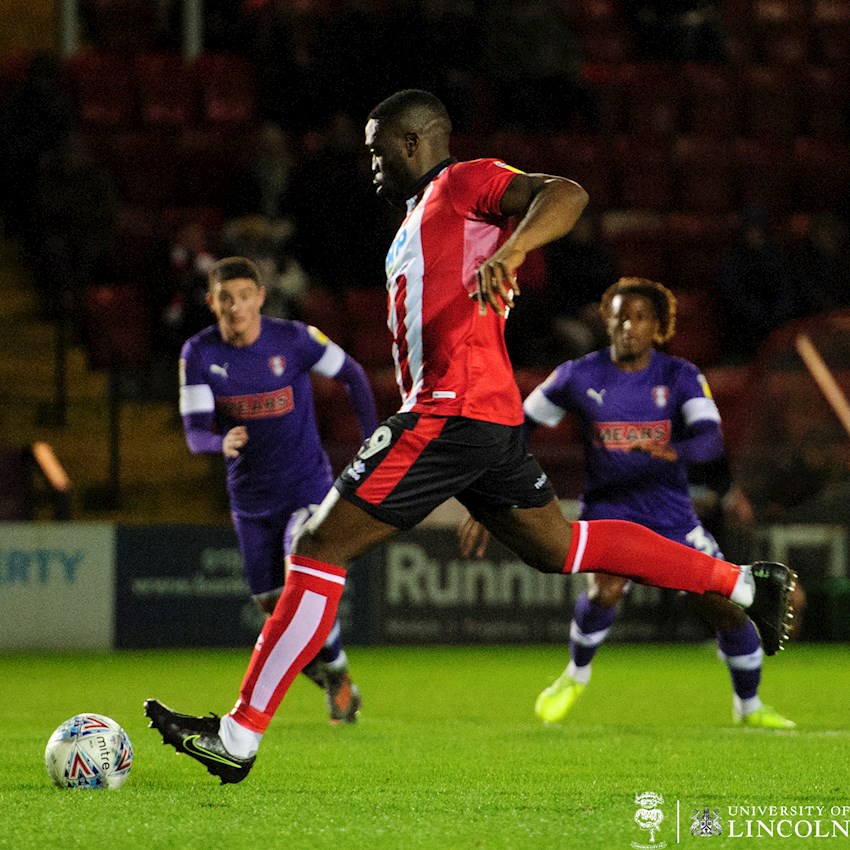 Taking their time to adjust, The Miller’s managed to stem the flow of The Imps’ attacks but they still found it difficult to apply any pressure of their own, with Grant Smith only being called into action once to calmly claim a looping header from Michael Smith.

The pace of the game slowed right down and almost similar in tempo to the opening ten minutes, much of the play occurring in the middle third of the field with any defensive breaches being dealt with swiftly and efficiently, by both backlines for the most part. Akinde cut a lone furrow in the Miller’s defence ten minutes ahead of the break, taking Jake Cooper and Matt Olusunde with him, running fully 30 yards with the ball at his feet into the Rotherham area before lining up Jack Payne, only to see the shot blocked. The Millers response to that attack was swift, Michael Smith getting up highest to nod a tame effort on target which Grant Smith pounced on before the visitors could even think of prodding the ball home.

City were close to scoring the third of the game minutes before the break, persistence from Payne down the right, left Anderson to dribble his way into space and drive a low ball across the face of the goal. Price dived to block the centre, the ball rolled into the path of Grant who sidefooted on target only to see the ball deflected clear of danger by the visiting defence around six yards from goal.

The Millers came out of the traps quickly in the second half, pressing high out of possession and forcing City backwards, Callum Connolly was in the right place to stop a cross from the Rotherham right after Jake Hastie strode confidently forward from halfway.

Chances were few and far between in the second half with neither side forced into saves, Frecklington and Coker were replaced by Jake Hesketh and Harry Toffolo respectively around the hour mark as City continued to look for two more goals which would see them progress into the next round.

Tom Pett found space on the right, dashing into the area but was shepherded wide by Adam Thompson but  he somehow managed to squeeze the ball through back to the penalty spot but as the home crowd hoped for the strike Rotherham cleared the danger and quickly progressed up the pitch at pace, but Ladapo struck his effort high and wide.

Following a dogged and determined block from Grant, getting in the way of OIosunde’s attempted clearance, Hesketh found the ball at his feet on the left corner of the Miller’s box, but he couldn’t quite wrap his foot around the ball to get enough swerve on his shot and it arrowed wide.

Time was ticking against The Imps who still needed two goals to progress, but they certainly weren’t going to go down without a fight. Payne, brought down on the right hand side of the box, got up to strike a vicious curling effort just over the top with Lewis Price clearly worried as he dived full stretch just in case it did sneak under the crossbar.

Daniel Barlaser tried the measured approach from just outside the City box, a curling right footed effort skipping off the turf as Grant Smith dived, who then withdrew his arms as he realised it was heading off target and out for an Imps’ goal kick. The game opened up and Grant was quickly in the thick of the action for The Imps, he found himself in space to shoot on target but his sidefooter didn’t have the pace to beat Price. The Rotherham ‘keeper then kept Payne off the scoresheet as he dived to save a rasping low drive from the City number ten, and it was the last action for Payne who was replaced with Tyler Walker coming on.

However, City still had a throw of the dice when they netted a third with a couple of minutes to go, WALKER rising highest to head home a set piece from the left and then when four minutes of stoppage time was announced the fans in the ground hoped for the fourth goal of the game and they were so close to it when Hesketh struck a volley on target but Price saved to deny The Imps progression almost with the last action of the game.