Following the midweek Leasing.com Trophy win over Rotherham United on Tuesday evening, Michael Appleton’s team are back on the road this weekend as they get back to SkyBet League One action.

City’s hosts on Saturday are Gillingham as The Imps make their first trip to MEMS Priestfield Stadium for over nine years in what will be the 47th competitive meeting between the two teams.  The sides sit next to each other in the league table both on 18 points, so a win for either side will mean one will have breathing space from the other come full time, so it adds a little more spice to what already promises to be a competitive game.

Steve Evans’ side have had an indifferent run of form over the last month, although they have been largely positive results in their last half a dozen games. The Gills haven't played on home soil for a couple of weeks in SkyBet League One, their previous outing was against a former club of their manager and City's opponents in midweek, Rotherham United, who took three points back to South Yorkshire from Kent by winning 3-0.

However, like The Imps they are still in the FA Cup, Gillingham have recently forced a 1st round replay by drawing away from home against SkyBet League One opposition, as Sunderland make the long trip south next week to decide who goes through to round two.

In midweek, Evans' side defeated Tottenham Hotspur’s Under 21 side 2-0 in the Leasing.com trophy, a game in which their young defender, Jack Tucker scored the first goal of his professional career however it wasn’t enough to see them through to round two of the competition.

Gills boss, Steve Evans, is looking forward to locking horns with Michael Appleton’s Imps side this weekend as he says it will be another tough fixture for his team.

“We have been in a real tough run of games and I include Lincoln in that pack, They have the resources and the managerial appointment tells you that they think big and pay big.”

Evans admits that even though he doesn’t know the City manager personally, he is well aware of him as a coach and rates him very highly.

“I don’t profess to know Michael but he is highly rated. I have come up against his teams on a few occasions when he was at Oxford and he did a really good job at West Brom as well. He is well regarded.

“There were some really good managers that were speaking to Lincoln, including Gareth Ainsworth, who has done incredibly well in our league. People said to me can you name the top six or seven (coaches) in the league and I named nine.” 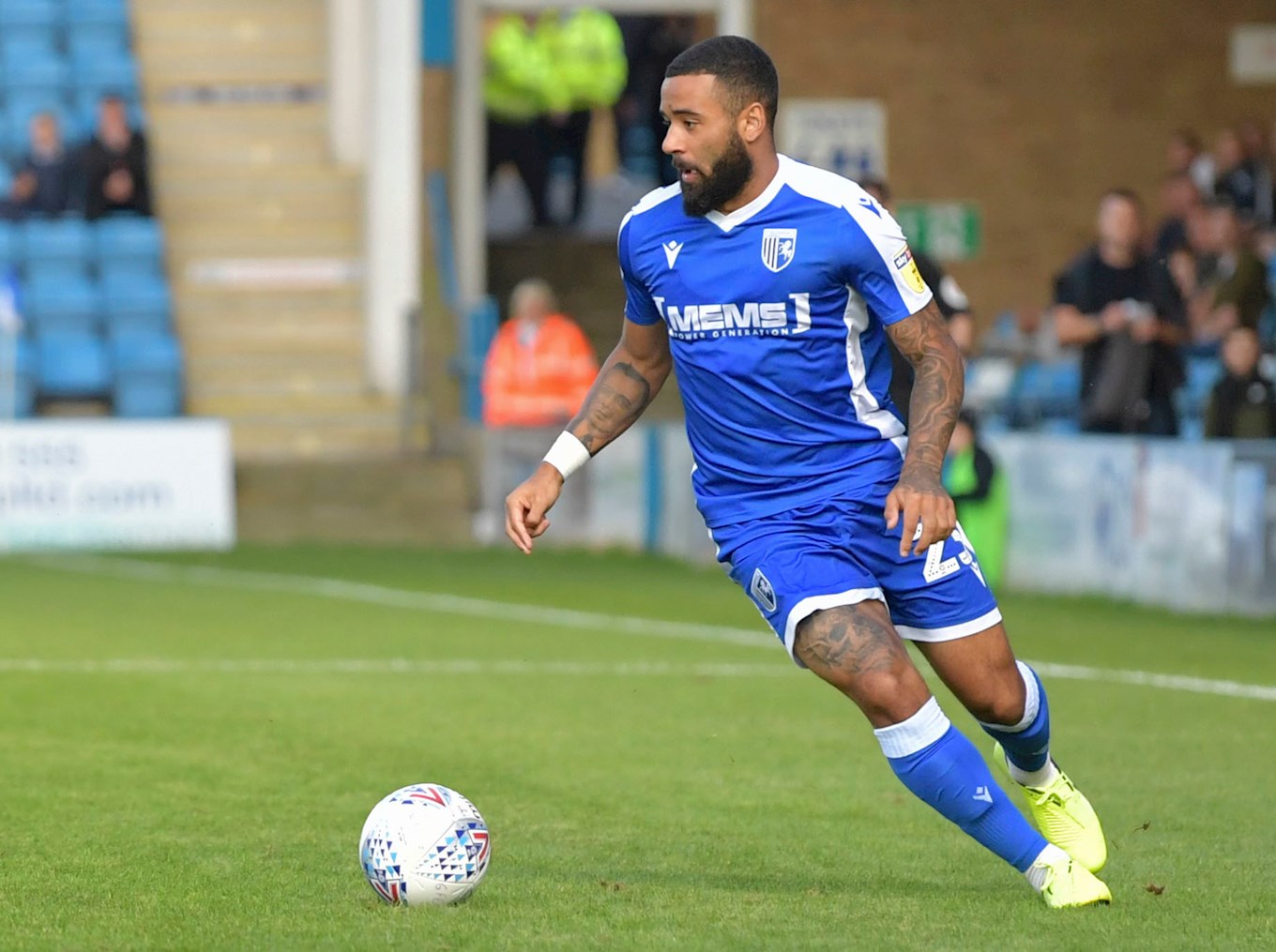 On loan Watford striker Alex Jakubiak is in scoring form for the Gills this season. The 23-year-old former Scotland Under 19 international has netted five goals so far in his 19 appearances since moving from Vicarage Road.

Jakubiak came through the youth ranks at the Premier League club after joining the club as an under 15 before making his debut for The Hornets in May 2014, starting alongside Troy Deeney against Huddersfield Town in the Championship.  Since his debut in the second tier, Jakubiak has played all his football away from his parent club, with Gillingham being his eighth temporary club.  He has had spells in non-league football as well as travelling North of the Border to Falkirk before hitting form this season for Steve Evans’ side.

The game this weekend is to watch LIVE on WeAreImps iFollow via a video match pass for internationally based Imps who reside outside the UK (inc Jersey, Guernsey and Isle of Man) with commentary coming from BBC Radio Lincolnshire Sport’s commentary team of Michael Hortin and Steve Thompson.

For details on both video and audio match passes – CLICK HERE

The Imps were to taste defeat on a disappointing and cold afternoon in Kent, a solitary goal from Mikael Mandron in the first half was the headline maker in SkyBet League One at the MEMS Priestfield Stadium.

It was a game of few chances for City  against a very physically imposing Gillingham side, who netted the winner midway through the first half courtesy of their number nine from deep inside The Imps’ box. Michael Appleton’s side made a late push for an equaliser but it wasn’t to be as the home side held out to take the victory.

Michael Appleton made a host of changes from the side which took on Rotherham United in the Leasing.com Trophy. Tom Pett, Callum Connolly, Jack Payne and Ellis Chapman were the players still in the starting eleven to take on Gillingham at the MEMS Priestfield Stadium this afternoon. But it’s only three changes from the last League One outing against AFC Wimbledon two weeks ago.

The hosts this weekend made nine changes from their exploits against Tottenham Hotspur Under 21’s in midweek, the only survivors from that win over the young Spurs were Connor Ogilvie and young defender Jack Tucker who scored his first professional goal in the 2-0 win for the home side. 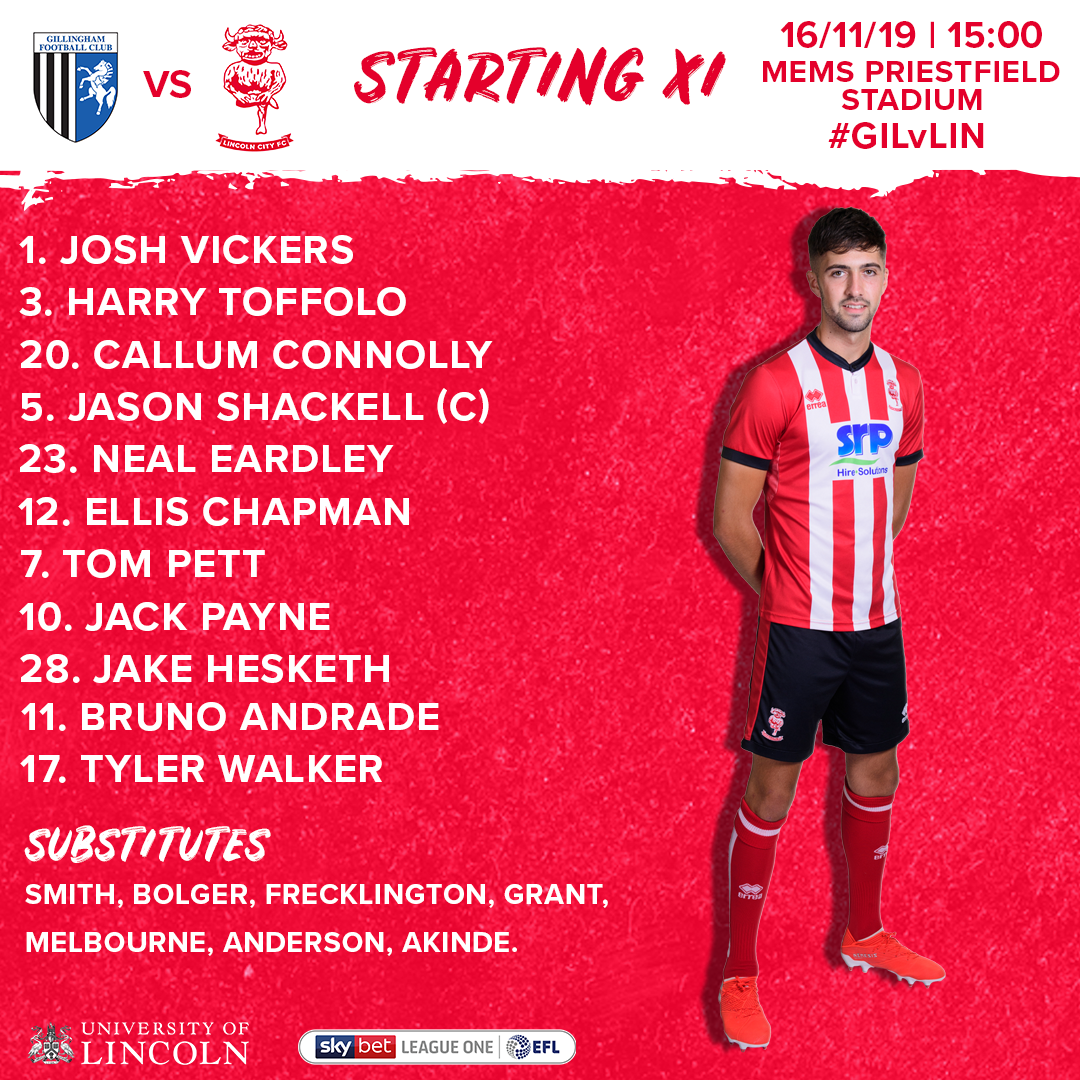 The home side got the game underway with rather dark clouds looming overhead following a respectful minute of applause from all four sides of the stadium in memory of the father of Gill’s Chairman, Paul Scully, who sadly passed away last week.

Neither goalkeeper were to be tested early on, the was game being contested in midfield. Ellis Chapman was the closest to setting The Imps on the road to goal, the City midfielder picked up possession on halfway and almost slid the ball between Max Ehmer and Alfie Jones for Tyler Walker to race onto, but Ehmer read the pass to intercept.

A long throw from Mark Byrne caused a little hesitation in the City box as the ball bounced around the penalty spot but it was cleared by the visitors as the combative nature of the game continued. The Gills were to get the first effort on target away, Stuart O’Keefe finding space to shoot from Brandon Hanlan’s knockdown but Josh Vickers watched it all the way into his grasp.

However, the home side broke the deadlock following a second throw in down the left, a short one this time provided Byrne the space to cross, although Jason Shackell got his head to the ball he couldn’t remove the danger and Mikael MANDRON reacted first to fire home from around the penalty spot.

Olly Lee smashed a shot over the top from the edge of the box after another dangerous attack from the home side down their left, as the home fans found their voice. Gillingham were having the better of the game with City not able to break through the stern resistance of the home defence. Chapman and Jake Hesketh linked which led to O’Keefe bundling the City man over, but when Neal Eardley teased in the resulting free kick it was headed away by Ehmer as the home side looked to impose themselves physically.

The Imps looked to be a little more methodical ahead of the breakl, in possession things were a little more considered than previously and City’s best chance of the half came towards the final moments of the first half, a switched ball from left to right found Andrade who got a shot away but it looped over the top with the aid of a deflection, leaving Michael Appleton much to ponder at the half time break.

Michael Appleton made two changes ahead of the second half getting underway, Cian Bolger making his return to first team action following the completion of his suspension and John Akinde on for Hesketh giving another attacking option for the visitors.  Within seconds of the restart City were inside the Gill’s box, Walker almost fashioning a chance as he fired a low cross through the legs of two home defenders before the ball was lashed clear. 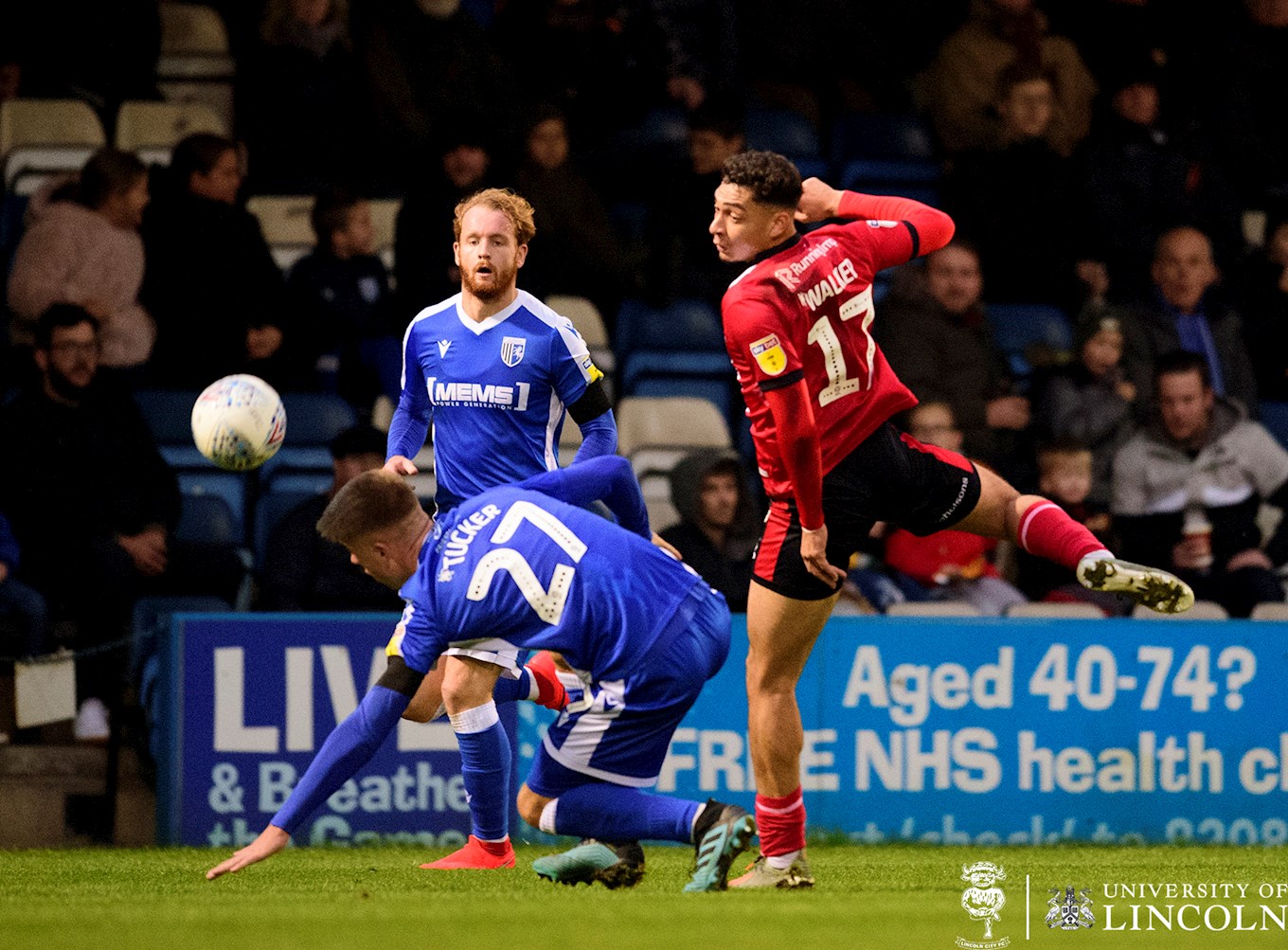 The Imps were looking more confident than they had for much of the game to this point, Payne was buzzing around across midfield and Akinde was causing a considerable amount of threat as he was attracting the attentions of more than one Gill’s defender thus creating space for others. That new found attacking intent was typified when Andrade bravely put his head in the way of an attempted clearance from Barry Fuller which resulted in a free kick for the visitors, with The Imps now kicking towards the bank of visiting fans they were urging their side towards the equaliser from behind Jack Bonham’s goal.

With City pressing forward, the home side looked to exploit things on the break, O’Keefe the closest to doing that when he twisted and turned on the edge of the box to create just enough space to shoot but the ball didn’t threaten the goal.

Mandron headed over a right-wing cross from Byrne as the home side looked to extend their lead just past the hour mark and the near miss gave them added confidence. Hanlan had a couple of bites of the cherry inside the box following a flick on from Connor Ogilvie but Pett was fully committed to the cause as he threw himself right in front of the ball in the heart of the City box.

The Gill’s number nine, Mandron, continued to be the focal point for the home side and he rattled the Imps’ crossbar with a header from a right wing cross from Lee before Eardley made a fantastic tackle just at the point Hanlan looked to let fly inside the box as the home side were piling on the pressure. Eardley was again in the right place to deny Hanlan as he latched onto Mandron’s flick with just over ten minutes to go with City’s defensive qualities coming to the fore.

Eardley was then involved up the other end of the field as he curled in a very tempting centre into the box which Akinde attacked powerfully but the home defence did enough to clear. They couldn’t do much to stop the big striker connecting with a cross from the full back in the last minute of the game, however his flick header went agonisingly wide of the goal with Bonham rooted to the spot.  Walker’s close-range header in the final moments of stoppage time almost caught out but Bonham was in the right place to react quickly to the change and deny City a late share of the spoils.