It’s another night under the lights at LNER Stadium as we welcome MK Dons to Lincolnshire for Sky Bet League One action.

City fans can keep up with the game LIVE on WeAreImps iFollow with all the action being streamed domestically and internationally, with commentary coming from BBC Radio Lincolnshire Sport’s team of Rob Makepeace and Steve Thompson – For details click HERE.

Alternatively, you can purchase your match ticket click HERE.

Recent Form
MK Dons currently sit in 19th position in the SkyBet League One table, five points behind the Imps. Russell Martin's side have picked up form in recent weeks winning two of their previous three games, whilst picking up a point away to Shrewsbury on Saturday.
Their most recent win came at the start of the month when they put two past promotion-chasing Wycombe Wanderers, Dons' goalscorers were Rhys Healey and Ben Gladwin.
Last 5 league games: DWWLL
Manager's Comments
MK Dons boss Russell Martin spoke to press ahead of their trip to LNER Stadium.
The former Norwich man explained how the two sides have both changed since their last meeting: "It will be a completely different game.
"They were really good when they played us here, and they probably went away disappointed not to get anything. I played in it, so I know how hard it was! I think the recent meetings have always been interesting and decent fixtures, so hopefully, this will be the same."

Martin continued by speaking about how it will be a difficult game for his side: "It's a tough game, they're a team in transition with a new manager, a lot of new players too as he tries to change the way they play. It's not too dissimilar to us, but they had a bit of a better position to start.

"They're really good at home, so it will be tough but I'm really looking forward to it. I think we'll go into it full of confidence, and if we can do what we did on Saturday, we'll go there positive."

WeAreImps iFollow
City fans can keep up with the game LIVE on WeAreImps iFollow with all the action being streamed domestically and internationally, with commentary coming from BBC Radio Lincolnshire Sport’s team of Rob Makepeace and Steve Thompson – For details click HERE.

The Imps drew 1-1 with Russell Martin's MK Dons side in SkyBet League One Action at LNER Stadium on a cold Tuesday evening. Liam Bridcutt's first half wonder strike claimed the point for Michael Appleton's side in the midfielder's second game for Lincoln.

The Imps’ starting 11 saw just one change to the starting line-up which faced Rotherham United last Friday. Tayo Edun came in for Max Melbourne to make his fourth start for City. 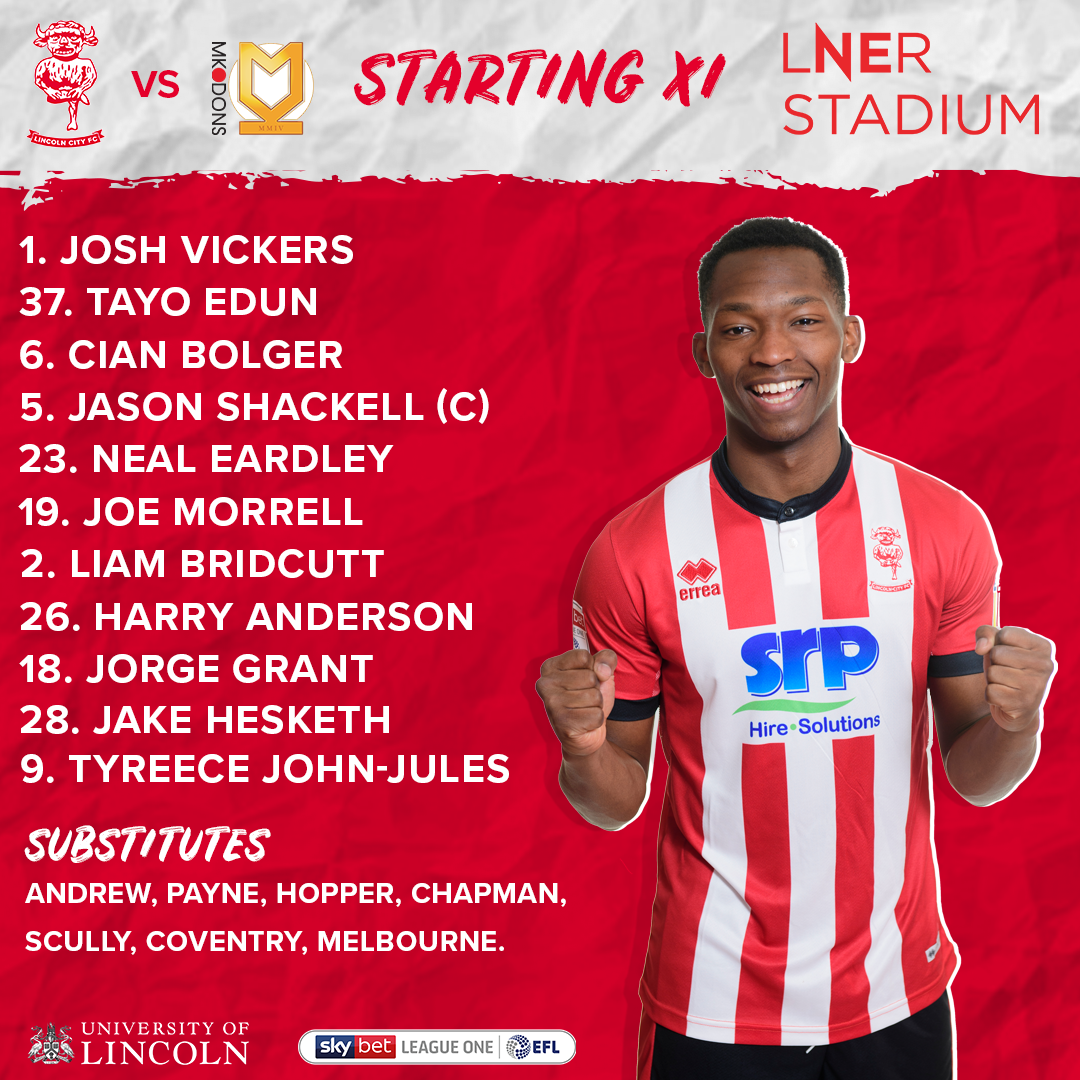 The Imps got things underway on a cold evening at LNER Stadium attacking down the left side. An early throw-in was awarded to City before MK Dons picked up possession.

As MK attacked the Imps half, they won a free-kick on the edge of the box after Rhys Healey was brought down. It was the Dons’ number 10 who stepped up to take the set-piece, firing it past Josh Vickers in the Lincoln goal to give the visiting side an early lead.

The Imps looked for an equaliser with Jake Hesketh picking the ball up in the centre of the pitch, who then played it wide to Harry Anderson who was bursting forward. The City winger delivered the ball into the area with it eventually finding its way to Tayo Edun who couldn’t quite connect to make a real threat towards Lee Nicholls in the MK goal.

Lincoln won the first corner of the game when Jorge Grant knocked an impressive delivery into the area which went off a Dons head. The Imps continued to fire them in with the set-piece finding striker Tyreece John-Jules who produced a header which went just over the bar.

The Dons frustrated Lincoln playing it around the back before finding Carlton Morris on the wing, however, Edun was soon to step in preventing the MK man breaking through.

Liam Bridcutt scored a wonder strike on just his second start for the Imps. The midfielder found himself with plenty of time on the ball before hitting it out of nowhere, firing the ball straight past Nicholls to level the score and send the City fans wild.

With the Imps picking up momentum, Joe Morrell found Anderson out wide who sent one into the area where Grant dummied it for Morrell who could only watch as his shot fire off a yellow shirt.

Morrell was involved again moments later, this time playing through John-Jules at the front post who attempted to knock it past the MK goalkeeper, however, his shot went just wide for a goal kick.

Shortly after, John-Jules thought he had put the Imps ahead when Anderson’s initial shot fell to him on the penalty spot, but the striker was unlucky, hitting the crossbar at some pace going out top safety for MK.

Morrell picked up the first yellow card of the game just after the half an hour mark when he brought down Jordan Houghton in MK’s half. Grant was the next Imps player to foul a visiting player and get booked, this time it was Regan Poole who went down to win the set-piece. Houghton and Dean Lewington stood over the ball just outside the area, firing it towards the back post where Lincoln’s Cian Bolger calmly met it to get rid.

Bridcutt created the play with a great ball to Hesketh on the right-hand side, the Imps attacking midfielder brought it forward with a great touch before finding John-Jules, The City number nine then smashed it across goal towards Hesketh who couldn’t get the right accuracy on the ball, sending it over Nicholls’ goal.

John-Jules battled hard up front, winning the ball off Jordan Moore-Taylor to play Hesketh through on goal. The Imps number 28 was one-on-one with the MK goalkeeper, and only needed to slot it past him, however, Hesketh’s shot fired wildly over the bar and into the Bridge McFarland stand.

The visiting side thought they had taken the lead shortly into the second half when Healey knocked it in at the back post, but the linesman firmly held his flag up for offside to the relief of red and white shirts.

Lincoln continued to look for a goal to put them ahead, with Anderson playing through Grant on the left side. The Imps number 18 sent his shot into the area but MK were quick to clear as John-Jules and Hesketh ran in.

The Imps were through again when Edun ran through a number of Don shirts before finding Grant on the left side. The Imps number 18 then saw Morell on the edge of the box who took a touch before firing one towards Nicholls who comfortably dealt with the effort.

Hesketh was replaced by Tom Hopper just before the hour mark as the Imps looked for a second with another attacking option. City then made a second change when the booked Morrell came off for Conor Coventry.

Bridcutt was the third man in the book for Lincoln, for a foul on an MK man. The visiting side then made their first change of the evening as Russell Martin brought on Louis Thompson for Sam Nombe.

The Imps a fourth man booked when Edun picked up a yellow following a clash with Houghton.

With no side taking any real chances, the Dons saw their first yellow of the game when Houghton got booked.

Vickers pulled off an incredible save for the Imps when Healey’s shot pinballed around the box before heading towards goal. Louis Thompson started the play feeding it to Alex Gilbey who produced the cross into the area meeting MK's number 10.

The fourth official showed six minutes added time creating a roar as the Imps supporters pushed their side on. However, no real chances came for either side as the referee blew up for full-time with the scores level.

As ticket sales head towards 8,000 for tonight's game against MK Dons at LNER Stadium we would like to remind supporters yet to purchase a ticket that there's still time to get yours.

Tickets are still available on Lincoln City Eventbrite - HERE - or you can get your ticket in person by visiting the Club Store at LNER Stadium.

There is availability in the Bridge McFarland and Stacey West Stands for Imps' fans to come and support the lads against MK Dons tonight in Skybet League One.

So...If you haven't got your ticket or can't get to the Club Store until this evening, don't worry as tickets are available right up to kick off this evening.

Thanks for your support