The Imps bowed out of this season's Carabao Cup after a fantastic cup tie against Premier League side, Everton.  Marco Silva's men fought back from an early setback as Harry Anderson put City into a first minute lead, Lucas Digne levelled beforee Gylfi Sigurdsson put the visitors into the lead for the first time. City then got a leveller of their own through Bruno Andrade but then the visitors were to take the game away from Danny Cowley's men with late strikes from Alex Iwobi and Richarlison.

City made five changes to the starting line up which face Doncaster Rovers last weekend as they welcomed Premier League Everton who boasted a team packed full of international and top flight experience.

After a rain-soaked hour prior to kick off, the turf was looking slick and ideal for an evening of Carabao Cup football in front of a packed house at Sincil Bank in front of the Sky Sports cameras. 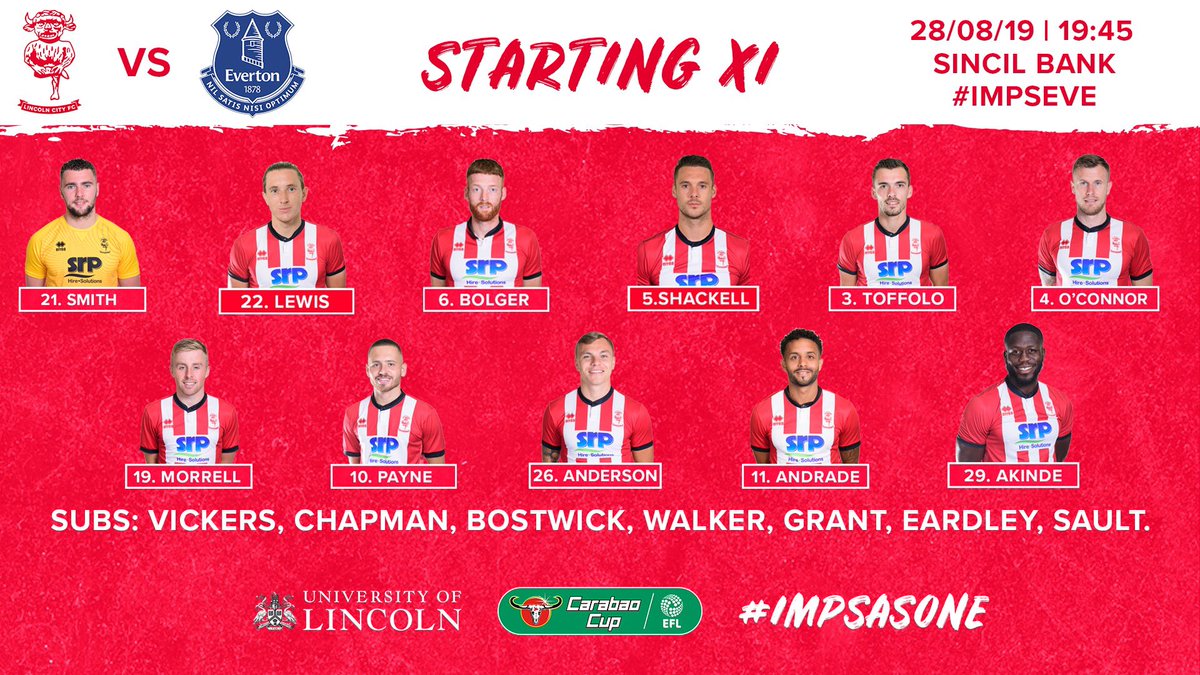 The game couldn’t got off to a better start from a home perspective as The Imps took the lead within 21 seconds, City made a quick purposeful burst down the right with Jack Payne chasing the ball and getting it from in-between97 Fabian Delph and Micheal Keane, then he somehow managed to keep it in to cross for Harry ANDERSON to sweep home beyond Jordan Pickford from inside the penalty area. The ground absolutely erupted with the City fans bouncing across three quarters of the stadium however, with much of the game still to play there was no chance of over exuberance in the home ranks on the field.

Marco Silva’s side weren’t to let their shoulders drop despite the early setback and began to take a grip on possession and try to push The Imps back into their own half with Lucas Digne a real outlet on the left flank and Fabian Delph was dropping into pockets of space outside the City area looking to spray the ball around dangerously.

Bit one player who had been relatively quiet in the early exchanges forced the first save, Gylfi Sigurdsson tried an acrobatic overhead kick from inside the box after the ball looped off the head of Cian Bolger, but the goalbound effort was well blocked by Grant Smith. The Toffee’s number ten then let fly from outside the box following a clearance but the ball arrowed over the top.

Smith was then getting a standing ovation from the City supporters, Digne got the ball out wide on the left, pulling inside to Alex Iwobi, he took a touch and whipped a vicious curler on target but the Imps’ stopper dived to make a terrific stop, turning the ball over.  The visitors momentum was building and they had two half chances within the space of a minute, first Keane’s header was cleared off the line by Bruno Andrade before Shackell and Bolger got in the way to deny Richarlison a sniff of a chance as the ball bobbled deep inside the Imps’ penalty area.

The City fans were giving their side every ounce of their support and it was clearly showing on the field as The Imps began to make their way further forward, but the danger was always lurking from the visitors which was highlighted by Moise Kean when he carried the ball 30 yards from a defensive position into the City half, ghosting past a number of challenges before being halted by Michael O’Connor.

As half time was creeping ever closer, City almost snatched a second when Andrade rattled a half volley just wide of the target. However, that close call was beaten by the visitors who scored a sublime equaliser from the boot of Lucas DIGNE the Toffee’s number 12 curling home from 25 yards into the top corner giving Smith absolutely no chance.  Iwobi was close to making it two goals within a couple of minutes, he cut in from the right before smashing a low effort which cannoned off the near post and to safety. The visitors were turning up the heat again and Richarlison will have no doubt been cursing himself after Iwobi found him in space to shoot but the ball flew wide.

It was a real cup tie atmosphere, both sets of fans in fine voice and the action on the pitch just as hot, Payne was brought down by Sigurdsson just outside the area and the home fans were stood expectant but the wall did its job blocking Andrade’s attempt at goal in what would be the final attempt of sorts of a first half that had plenty of action and intrigue.

Both sides remained unchanged as the second half kicked off with the rain pouring down on the Sincil Bank turf, the visitors made the first half chance of note when French international full back Djbril Sidibe burst down the right to cross only to see Bolger on the end of his ball in to clear.

Everton were keen to get their noses in front early in the second half and were throwing men forward into the box to supplement almost every attack but City were far from done in an attacking sense. Andrade and Payne linking up down the left with the City number eleven showing fleet of foot to win a corner for The Imps, the set piece was met by Shackell at the back post from a tight angle but Pickford was well placed to save.

The visiting side were given a chance to take the lead for the first time when Schneiderlin was brought down inside the box and the referee awarded a penalty, up stepped SIGURDSSON who smashed the ball into the top corner in front of the travelling supporters.

The away side were now looking to extend their advantage and attempting to play the ball around the City defence but The Imps were standing firm.

Danny Cowley’s side were still looking threatening going forward, undeterred by the visitors taking the lead and weren’t afraid to try and take the game to Everton but it that attacking intent would only leave space for the pace of the Toffees to exploit when winning back possession. Richarlison did well on halfway, and he spread the ball wide to Iwobi who stepped over the ball to create space and then fired a low effort that skidded off the slick surface but it went just wide.

City continued to plug away, Harry Toffolo made a fantastic run down the left, he played the ball into the feet of Andrade before taking the return and crossing but sub Jorge Grant fluffed his lines. However, the next attack was to bring City the equaliser and how.  A cross was played into towards Akinde but Keane bet him to it, the ball flew into the air and waiting for it to drop was ANDRADE who absolutely hammered the ball home on the volley into the top corner. 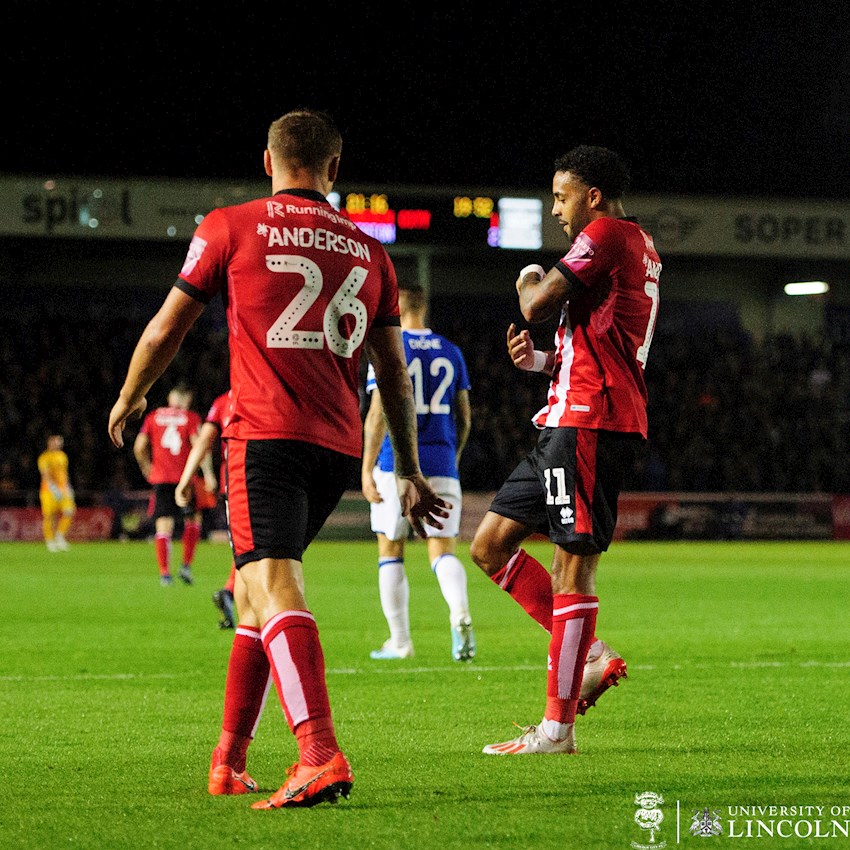 The home side were now rocking their Premier League opponents, Neal Eardley smashed a low effort which cannoned off Keane and went wide. But the visitors went back in front arguably against the run of play, Sigurdsson crossed to the back post to Tosun who leapt to head back into the danger area and IWOBI helped it over the line into the corner.

City rallied immediately as Andrade and Toffolo created a corner which was met firmly by Bolger who forced Pickford into a save but the flag was raised with Andrade just ahead of the Everton defence and in front of the Toffee’s ‘keeper. RICHARLISON though was to end any hopes of a late City comeback as he wrapped up the game for the visitors with a fourth goal which was arguably cruel on The Imps.

Danny Cowley’s men fought right to the last but after a titanic battle against their Premier League opponents they were to bow out of the League Cup with their heads held high.