The Imps have been on the road for their last three opening games earning points against Woking, Wycombe and Northampton under Danny and Nicky's management.

City played a handful of Championship sides throughout pre-season however, Cowley’s men returned from their summer break facing non-league sides Gainsborough and Lincoln United in the Community Festival of Lincolnshire Football, comfortably winning both games.

A week later Sheffield Wednesday visited Sincil Bank in what would be Steve Bruce’s last game as the Owls’ manager. Young forward Jordan Adebayo-Smith scored City’s only goal as the Imps lost 3-1 against a strong Wednesday side.

Lincoln beat Reading in Marbella as part of their summer training camp before facing Stoke and Scunthorpe on their return to England at the end of July.

The final pre-season clash Cowley’s side faced was against Nottingham Forest XI featuring first team players such as Jason Cummings and Daryl Murphy.

Defender Callum Johnson spoke to Accrington Stanley’s website ahead of this weekend’s clash at Sincil Bank.

“Pre-season has been good, all pre-seasons are tough otherwise you are not going to get the strength in your legs to get fit for the matches,” said the 22-year-old.

“The last few games have been competitive and it’s what you need. We got a good result against Preston who are a good side and I got an assist as well.”

Johnson went on to explain that he is glad the pre-season period is now over and the focus is on playing games for points: “I can’t wait for the start of the season when it actually matters.

“Lincoln will be a tough game, it’s a hard place to go, they have come up, they will have loads of confidence similar to us last season.

“We started off well after our promotion and we need to go there and show them what we can do.

“Every season is a big season for me, I just go into every game wanting to win.”

Despite competing in different leagues last season, City faced Accrington Stanley during the 2018/19 Checkatrade Trophy at the Wham Stadium.

Jamie McCombe managed to find the scoresheet in the 60thminute, four years and 102 days after his first City goal, which was against Derby County in August 2004, a club record between first and (currently) last goals for the Imps.

During the 2017/18 SkyBet League Two campaign both sides won their home fixture with the Imps winning 2-0 at Sincil Bank in December 2017.

Matt Green and Matt Rhead were both on the scoresheet for City.

One to Watch – Sean McConville

Now in his fifth season with Accrington following his return to the club in 2015, Sean McConville is a fan favourite at The Wham Stadium.

The 30-year-old started his career with Skelmersdale before signing professional terms with Accrington Stanley in 2008.

He signed for Stockport County in 2011 after three-years with Stanley before joining Rochdale on loan in 2012.

McConville joined non-league side Barrow on a short-term deal in September 2012 before going on to feature for Stalybridge Celtic in the then named Conference North.

Chester signed the midfielder in 2014 where he scored four goals in 41 league appearances during the 2014/15 season.

During Accrington’s promotion season, McConville scored 12 league goals in 43. An improved goal scoring record followed during the club’s first season in League One with the 30-year-old finishing the season with a tally of 15.

City made a positive return to action as they defeated Accrington Stanley in front of almost 9,000 at Sincil Bank.  Michael O'Connor and John Akinde were the names on the score sheet as Danny Cowley's men got their 2019/20 SkyBet League One campaign off to a winning start.

Summer signings, Jack Payne, Tyler Walker, Jorge Grant and Joe Morrell were all named in the starting eleven with Alex Bradley on the bench as the sun beat down on the glorious Sincil Bank playing surface ahead of kick off, the scene also being set by a wonderful noisy atmosphere from both sets of supporters. 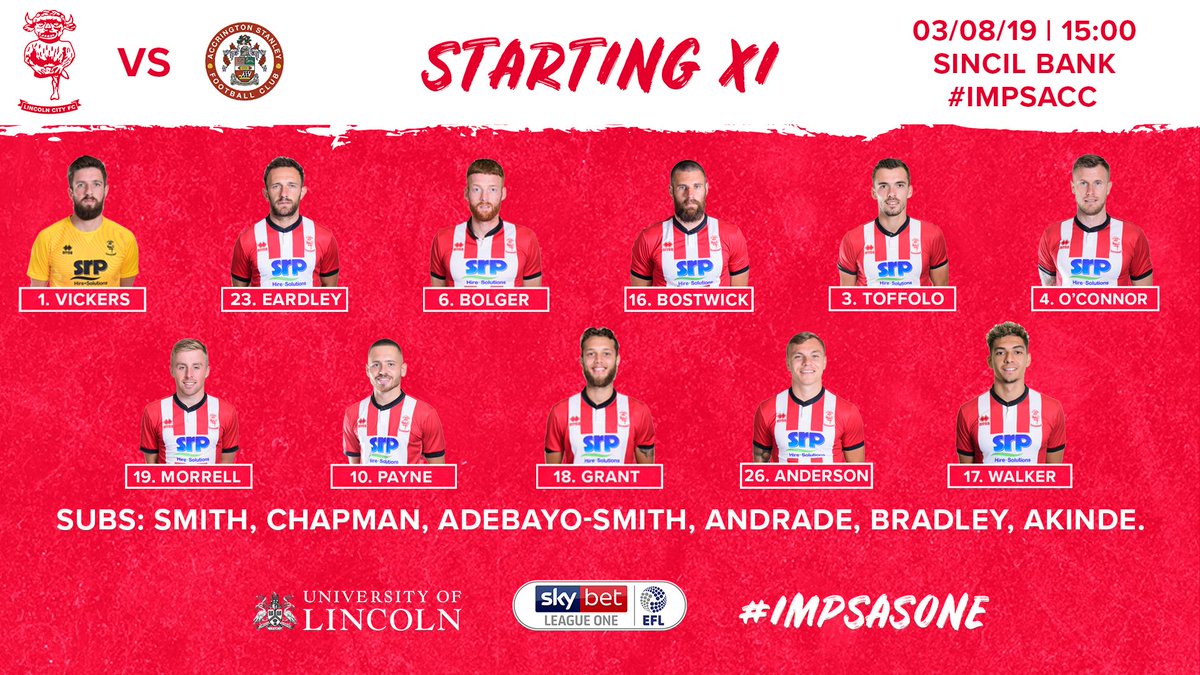 Danny Cowley’s men started the game on the front foot, with Tyler Walker and Harry Anderson combining to feed Jack Payne out wide, his cross was just ahead of Jorge Grant but the early signs were positive from the home side.

Payne’s influence in the early throws of the game were there for all to see and within the opening ten minutes he fired a low effort that just sneaked the wrong side of the post, and the City number ten was involved minutes later which again ended with the Imps just missing the target. Payne fed Grant who set Neal Eardley free, his deep cross almost sneaked in at the back post but was cleared by Jordan Clark for a corner. The inswinging ball in found Cian Bolger, his effort however just looped over the crossbar with Stanley ‘keeper Dimitar Evtimov rooted to the spot.

Stanley’s threat was coming from the ever-busy Sean McConville down the left, the number eleven creating a half chance before Joseph Maguire then crossed for Clark to thump a header just wide of target. The visitors were gradually edging forward with a little more intent, they were to be met though with a resolute and well drilled City defence who gave little away, typified by Bolger throwing himself in the way of a well struck Sam Finley volley.

The Imps were soon back on the attack, Eardley curling a dangerous cross following some good hold up play by Walker, Grant looked to race onto it but the delivery was inches above the City debutant.

McConville was brought down by Bolger with half an hour gone just outside the box, in the D, the Stanley talisman stepped up to take it and curled the ball over the City wall but it clipped the top of the bar and went over.  The Stanley number eleven was then to be involved at the other end as he brought down Harry Anderson on the right corner of the box, Grant played the ball to Bolger whose effort was deflected for a corner and City were to punish their opponents with the second set piece. MICHAEL O’CONNOR leapt highest to loop a header beyond the despairing attempts of the Stanley defender on the line.

The goal visibly boosted the morale of everyone of a City persuasion on and off the pitch, as they forced another two set pieces in quick succession but this time Anderson couldn’t profit as he couldn’t keep his header underneath the crossbar.

Grant hammered a free kick just over the top as injury time was announced at the end of the first half, then Walker forced another City corner although it wasn’t to result in a change to the scoreline The Imps finished their first half of SkyBet League One football on top.

The second half at breakneck speed when Stanley won a corner within 60 seconds of the restart but it was met with gusto by Bolger, heading away and City broke at pace down the right. Anderson putting in a delightful cross for Walker to head on target, Evtimov somehow though made a fantastic diving save to keeping out the goalbound effort on the line.

Harry Toffolo was proving important at both ends of the park, firstly providing an outlet in offensive positions then showing great energy to deny Clark a chance to cross back in his own half.

Evtimov then made even at this stage, one of the saves of the season to deny Michael Bostwick putting City two goals up, a wicked cross from the right by Payne was flicked on by Walker to Bostwick who looked to have diverted it into the goal but the Stanley stopper showed cat like reflexes to save.

After that near miss by The Imps, Stanley regrouped and bared their teeth again as Joe Prichard tried a measured effort which slid just beyond the grasp of Josh Vickers but also wide of goal as a reminder that the game was far from out of reach of John Coleman’s men.

The Imps though at times were superb and decisive in possession, manipulating the ball well and taking it away from their counterparts, Payne and Joe Morrell in particular linking superbly with the Bristol City loanee showing terrific vision and range of passing.

City were continually knocking on the door and doing it in some style, a fantastic passage of play down the right between Grant, Toffolo and Payne found Walker who turned the ball on target but Evtimov was once again proving to be a thorn in the side of the hosts.

Morrell made a purposeful burst which took him right to the edge of the Stanley area before being hauled over, Payne had two bites of the cherry from the free kick after initially hitting the wall but Stanley managed to clear.

Stanley changed shape a little after the introduction of Wilson Carvalho and a more direct approach gave them a different angle of attack and it almost bore fruit as McConville lashed a shot with very little backlift just wide of goal but Vickers had it well covered at his near post.  Moments later The Imps’ ‘keeper made a fantastic stop to deny McConville who smashed a half volley hard and low on target which would have levelled the game.

City were again so close to getting their noses further in front and it was Evtimov who was the hero for the visitors, Anderson pressed high and won the ball from Mark Hughes as he tried to clear, the ricochet fell into the path of Walker who did well to get the ball out of his feet before poking on target but the big ‘keeper did enough to save.

The Imps finally made another mark on the scoresheet when Bruno Andrade was clattered inside the box after being fed by Grant, up stepped JOHN AKINDE and he rolled the ball into the goal from the penalty spot. In injury time Vickers made a fantastic save to keep a clean sheet, scrambling across the length of his goalline to deny Colby Bishop a last minute consolation for the visitors.