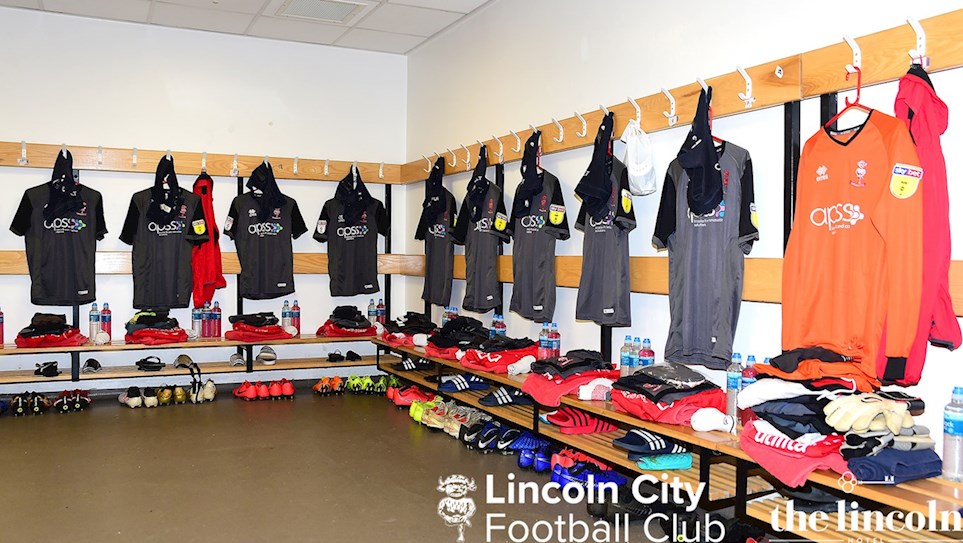 The Imps made it eighteen league games unbeaten, matching a club record and picked up all three points in a terrific victory over MK Dons at Stadium:MK.

John Akinde netted his seventeenth goal of the season from the penalty spot in the first half followed by a final minute blast from Bruno Andrade in front of over 5,500 travelling City supporters which will make the headlines but the performance by the team was one which will be remembered for quite some time.

City made two changes to the side which drew with Macclesfield Town at Sincil Bank, Jason Shackell returned after almost a month out through injury with Cian Bolger the one to step onto the bench, Shay McCartan also came back into the XI and Danny Rowe missed out with a slight knock.

The roar from the crowd as the teams came out for kick off was deafening, and the 5,500 or so Imps behind Matt Gilks’ goal in the first half were more than making themselves heard and it continued as the game got underway.

The hosts were the first to make anything like a purposeful attack, but as David Wheeler shaped to put in a low ball from the Milton Keynes’ left, in stepped Neal Eardley to take the ball away to chorus of applause from the City fans some 15 yards away from him.  John Akinde was a handful for the home defence up the other end of the field, hustling and bustling but Jordan Houghton for MK Dons was to force Gilks into the first save of the game, the low daisycutter was heading for the bottom corner until the Imps’ ‘keeper dived to his right to save.

MK Dons were attacking quickly, Jake Hesketh running with the ball before finding Michael Bostwick in his path, making a perfectly timed block tackle to deny the MK number eleven a shooting chance. But the hosts were to quickly win a corner, the outswinger by Dean Lewington was headed wide by Russell Martin. While the home side had seen more of the ball, City’s prowess on the break and holdup play from Akinde was more than enough of a lingering threat to keep MK on their toes.

The Imps continued to plug away at were so close to getting their noses in front, Eardley with a typically pinpoint free kick out on the right was met by Shackell who headed back across Lee Nicholls in the MK goal, it looked to be heading into the corner until Conor McGrandles hooked away from almost under the crossbar.

The game was a very even matched contest, typical of a top of the table clash between two evenly matched sides, defences were tight on both sides. Andrade was denied a shooting opportunity after McCartan sneaked in behind, before Hesketh’s path to goal was blocked by Eardley then it was the turn of Bostwick and Tom Pett to deny Kieran Agard on the edge of the City area.

Just after the 30 minute mark MK had the chance of the game so far, after the referee got tangled up in the middle of the pitch with Pett and the home side broke as play continued, Wheeler was slipped in to shoot but Gilks made a fantastic save, somehow throwing out a left hand to save and the visitors were moments later to be given a chance to net the opener.

McCartan was brought down just inside the box on the right, the referee pointed to the spot. AKINDE put the ball down and he did the rest, calmly stroking the ball past Nicholls and into the goal.

MK fought back almost instantly but couldn’t breach the City defence and The Imps were so close to going two goals to the good, Akinde and McCartan combined and the latter played in Harry Anderson who beat Dean Lewington, he clipped in a low cross that went into a sea of legs at the near post and somehow went wide with Nicholls completely motionless.

City were hammering on the door for a second and the home side were clinging on for dear life,  they were to resist the Imps’ pressure as the half time whistle was blown the visiting supporters showed their appreciation for a terrific first half performance.

The game restarted with City now kicking towards their supporters and there was an early opportunity for a second goal, Akinde danced past two challenges before being brought down around 30 yards out to the left of centre. Bruno Andrade stood over it, clipped it to the back post and Shackell was blocked from turning it back into the danger area. Hesketh returned the ball into City territory on the right, finding space to cross but Shackell was involved, perfectly placed to clear with Agard in close attention before Hesketh lashed an opportunity over the top from just outside the area.

Akinde was to show quick feet to get beyond Lewington and Joe Walsh on the edge of the MK area, he looked up and smashed a low effort which fizzed across the face of goal and beyond the far post. No one could take their eyes off the action as play went from one end to the other, although both ‘keepers weren’t called upon it was no less a spectacle.

Paul Tisdale called upon Chuks Aneke to add a different dimension to the home attack and he immediately looked to make his mark, firing from range but Gilks was comfortably grasping possession.

MK were roused by the change, both on and off the field as the team pressed a little higher up the pitch and the supporters raised the volume off it. Lewington swung over a deep cross but Gilks came and claimed confidently, leaping at the back post above Aneke. The MK sub then was to get control of the ball at the edge of the City box, he clashed with Bostwick and it brought a free kick for the home side but the former Arsenal trainee couldn’t get the set piece on target.

There was a flashpoint which saw members of both teams congregating on the touchline in front of the dugouts, which resulted in a player from both sides going into the referee’s notebook and it lit the blue touch paper for a thundering final twenty minutes.  MK brought on Ousseynou Cissé for Lewington as they began to throw more men forward but The Imps’ defence was in fine fettle. Hesketh won a corner for MK from which Aneke thundered a header just wide as the home side were arguably having their best period of the game.

Bostwick headed a dangerous centre from Callum Brittain out for a corner as the home side continued to pour forward but yet again the City rearguard were impenetrable.

City looked dangerous in possession but at the first opportunity MK were closing down and trying to hit The Imps on the break, however, it was Andrade who was to get the next shot away after Akinde found him free on the edge of the box but his shot was deflected just wide of target.

The visitors were building as the game was coming into the final ten minutes, winning a couple of corners as MK were penned into their own box but the game was far from over. The hosts rallied, throwing the ball forward pushing all their players into City territory but the visiting defence were throwing themselves infront of everything the home side had to offer. It was epitomised by Gilks who saved the best for almost last, as Cisse twisted as turned out on the left before crossing onto the head of Aneke and somehow the City stopper kept the ball out. The home side were to rue that chance as The Imps killed off the game when ANDRADE took things into his own hands, taking possession around 25 yards out, looked up and fired across Nicholls into the corner in front of the jubilant travelling supporters. It was a fitting end to a pulsating game and leaves The Imps eleven points clear at the top of SkyBet League Two with five games remaining.