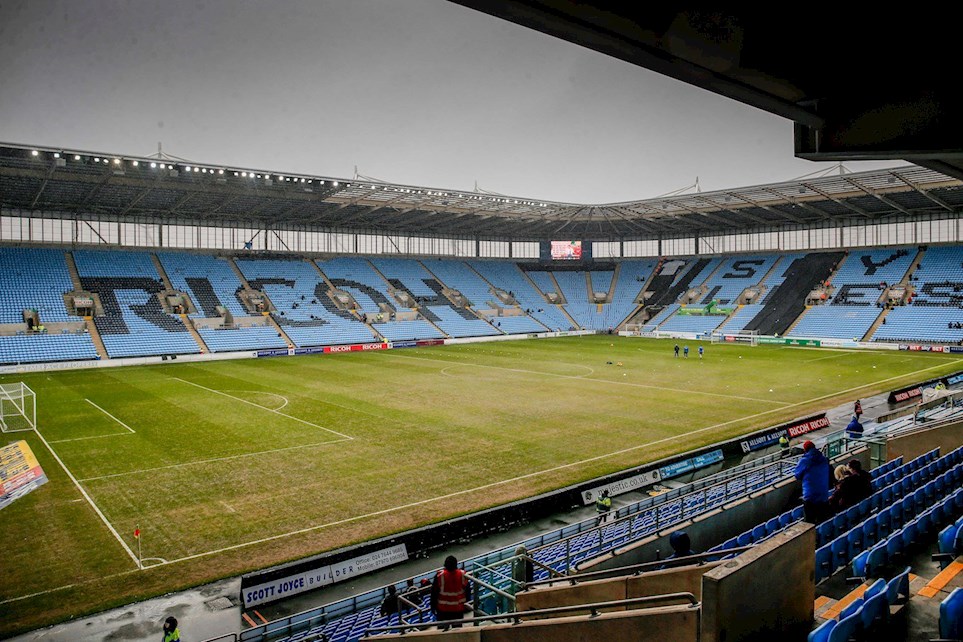 The Imps recorded a memorable victory at the Ricoh Arena after a breathless game that had six goals and some fantastic football from both sides, the win moved The Imps six points clear of eighth place in SkyBet League Two.

Matt Rhead opened the scoring before Tom Bayliss leveled for Coventry City, Ollie Palmer put The Imps back in front, but Jordan Shipley again restored parity for the hosts. The scoring wasn’t finished there in the first half, when Palmer then struck again. Lee Frecklington put the game out of the sight of the hosts deep in the second half to send the visiting army of supporters back to Sincil Bank with beaming smiles.

There were three changes to the side which defeated Colchester United on Saturday and the The Imps kicked off the game with around 3,000 supporters inside the stadium and more still streaming in and they won’t have believed their eyes as they witnessed the opening goal in under a minute and what a hit it was.  Scott Wharton played the ball from left to right, Matt Green was out on the right he left it to Neal Eardley to cross, Lee Frecklington headed it into the path of MATT RHEAD who hit an absolute thunderbolt into the top corner from around 22 yards.

The home fans were stunned, the away fans were bouncing with delight and Rhead almost doubled his and the Imps’ lead with before ten minutes had passed, he tried a chip over Lee Burge in the Sky Blue’s goal but the ‘keeper was equal to it.

At the other end of the pitch, Jack Grimmer couldn’t get the better of Wharton as he tried to burst down the Coventry right to create a first chance for the hosts. Green almost profited from an Ollie Palmer flick on but Burge was quickly off his line to just put off the striker, then Rhead almost profited from a Wharton cross but his header was just wide. The Imps continued to pile on the pressure, the movement in attacking areas was causing the hosts all sorts of problems.

However, Coventry were to equalise with an incisive break following an Imps corner, Burge quickly released the ball out on the left and Jordan Shipley took over, he looked up before picking out Tom Bayliss who sidefooted into the far corner past Ryan Allsop,

Coventry’s tails were up and they were playing with a renewed confidence following the equaliser, Marc McNulty jinked his way across the edge of the penalty area to fire back across the face of goal which had Allsop scrambling to cover but it crept wide of goal.

The game settled somewhat but both sides would have been wary of their opponents threat going forward, The Imps running strongly in possession with the hosts passing the ball with pace, two different styles but both just as effective.

Grimmer tried to curl one in at the far post after a strong run from full back for Coventry but Allsop had it covered. After a period of the game where both sides were looking to size each other up again, the game erupted back into life with two goals in a matter of minutes.

First a lovely flick from Rhead set PALMER on his way, his touch took him past the attentions of Liam Kelly and he finished cooly into the bottom corner. Almost straight from the restart Coventry had themselves on level terms, Shipley this time scoring time sweeping home from Bayliss’ feed.

However, the scoring wasn’t over in a scintillating period of play. After winning two quick corners, City were to net a third goal and the fifth of the game, the initial ball in was cleared but Eardley played it back into the danger zone where James Wilson was at the back post, his effort was blocked but PALMER was there to smash home deep inside the box.

Coventry were looking to quickly get back on level terms after the restart but The Imps were resolute, working hard to restrict the hosts to little other than half chances, Jonson Clarke-Harris made sure that Allsop was on his toes with a downward header from a right wing centre but the Imps’ ‘keeper was right behind it.
The Sky Blues kept up the pressure but the defensive organisation shown by The Imps was impressive, Coventry weren’t able to really test Allsop and the home supporters were getting frustrated and that frustration almost got worse when a deep cross from Eardley found Rhead but a vital intervention from Kelly just took the purchase off the header and Burge was able to pluck the ball out of the air.

Midway through the second half, the hosts were having more possession in the visitors half, without creating much of a chance and on the break The Imps punished Coventry in some style. Palmer made a quick break down the left, looking up to feed Rhead on the edge of the area and the striker played a wonderful dinked ball over the defence to FRECKLINGTON who beat the advancing Burge to the ball to give the visitors a two goal lead.

The rain was lashing down onto the pitch but the wet weather certainly wasn’t dampening the spirits of the fans from Lincolnshire who were in fine voice.  The volume almost went even higher when Luke Waterfall met a corner with a thumping header, which was heading into the goal but for a crucial block by Grimmer on the line.

Allsop was called upon then to keep the Imps advantage to two, a move for the Sky Blues was built nicely through midfield before Ryan Haynes stood up a cross to the back post where Max Biamou leapt highest, his downward header was on target but The Imps’ keeper was to block and then Waterfall cleared the rebound to safety.

Jordan Ponticelli arguably should have pulled the hosts back within one as the game entered the final minute of normal time, a ball from right to left found McNulty who played in the Coventry substitute somehow he could only turn the ball over the top from close range.

For any Imps’ supporters who have yet to collect their tickets for tomorrow’s game against Coventry City, we ask if you are in the vicinity of the City and could safely get to Sincil Bank we would appreciate if you could come to collect your tickets.

The deadline for collections today is 2pm, however, on this occasion if you cannot get to the Ticket Office today safely, then any uncollected tickets will be available to collect at the Ricoh Arena ahead of kick off tomorrow. 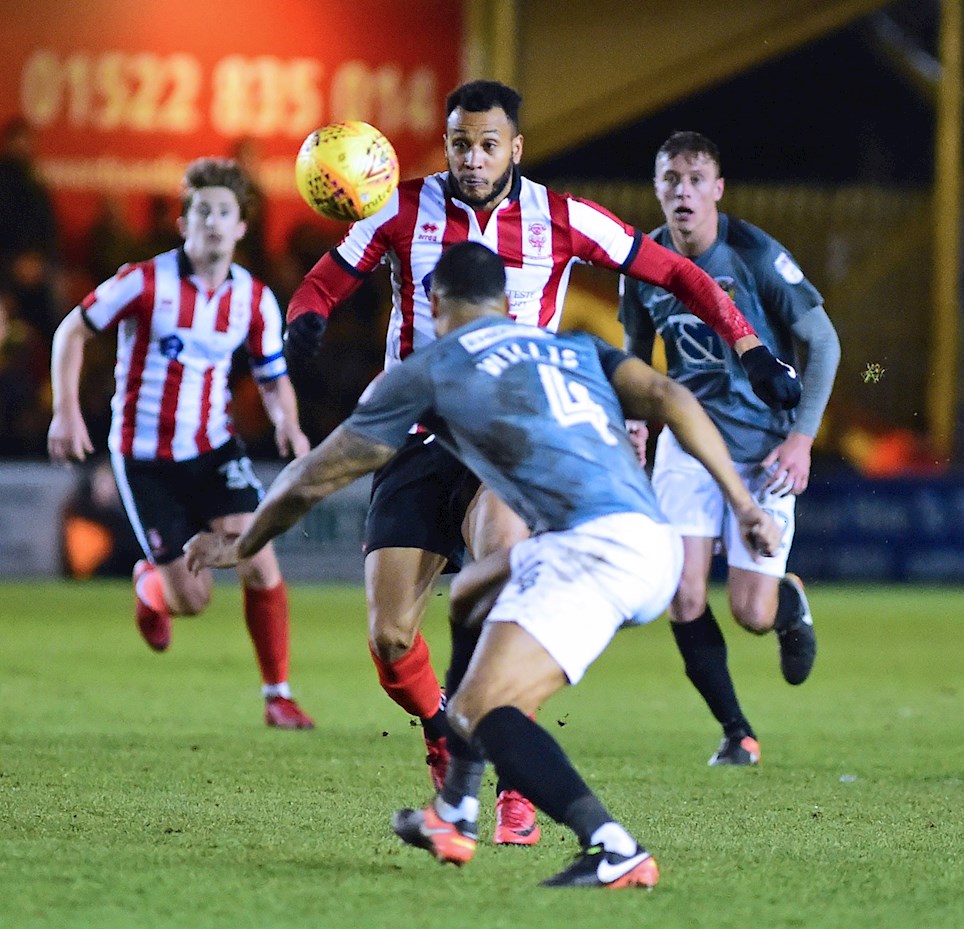 
We are pleased to announce all the tickets for the SkyBet League Two game at Coventry City have now arrived at the Sincil Bank Ticket Office. 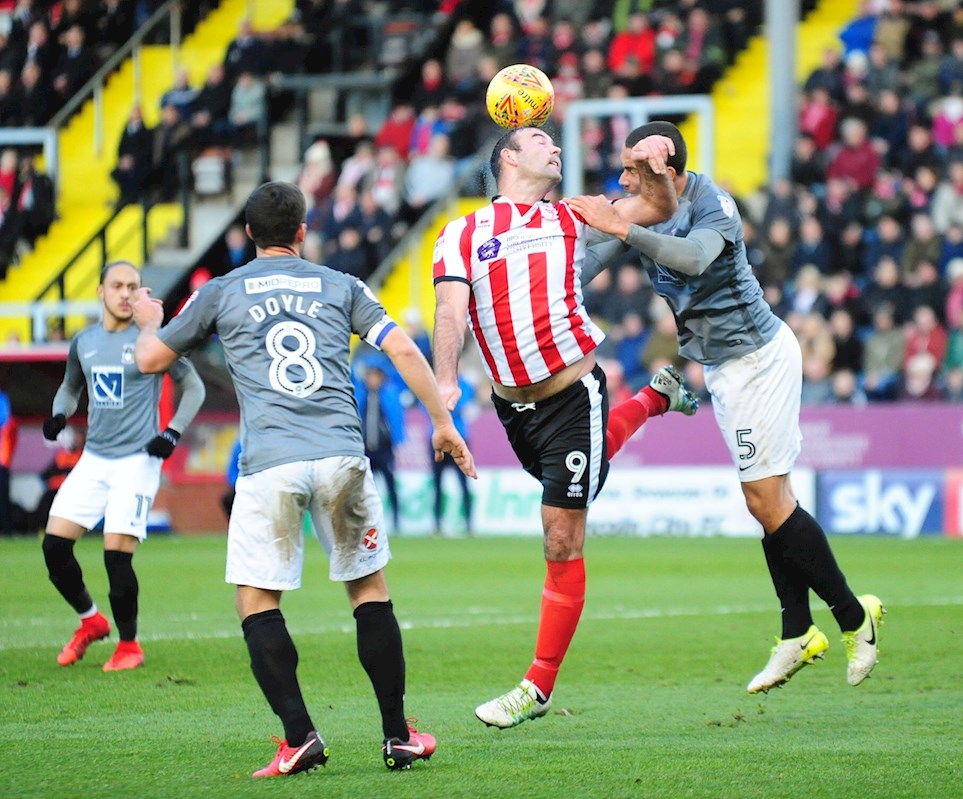 
The tickets for our away trip to Coventry City on Saturday 3rd March go on sale TODAY at 10AM.