Michael Appleton says his squad are ready to fight their way up the table. 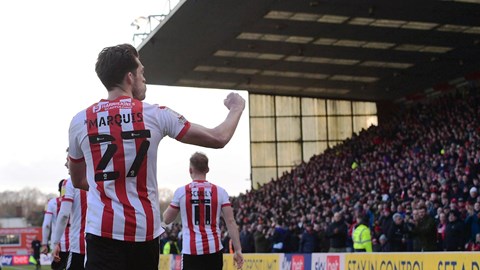 Three wins from five games have given the Imps a good start to 2022, but a home loss to Burton Albion is a reminder there is still plenty of work to do.

Appleton said: “No one’s getting carried away in that dressing room, - ee know we’re in for a scrap and that scrap is going to continue for the next 15 or 20 games that are left.

“We’re ready and prepared for it. We’re certainly in a better position than we were six weeks ago from a mentality, performance and form point of view.”

Appleton was pleased with new signing John Marquis after he bagged his second goal for the Imps on Saturday, and felt the performance against Albion was enough to merit something from the game.

He added: “We brought in someone to be there in that six-yard box when the ball is coming into the box and he was. He’s got his reward from gambling to think that the ball will be there and I’m delighted for him.

“Even after the goals we got into some fantastic positions in the box but just picked wrong choices and were poor in our execution. We’ve been good for five or six, maybe even seven games now and the only critical thing I can say about the players is how we dealt with the set plays.”