Lincoln City manager Michael Appleton is confident his side can produce a positive run of games as the Imps enter the new year. 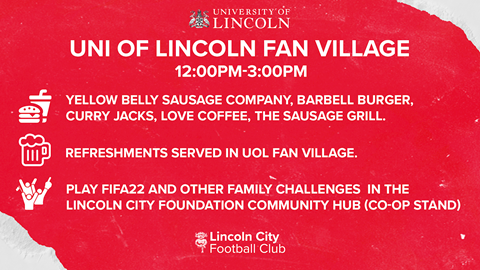 Despite postponements denying his side the opportunity to pick up more points over the festive season, the boss believes his side's performances against Cheltenham Town and MK Dons in the past two games deserved more reward than they garnered.

He said: “I’ve had tough periods in my managerial career similar to this situation so you’ve just got to keep a focus on what you’re doing and nothing else, because it's difficult to try and control what other people are doing.

“We control what we’re doing and how we try to win, and I’d say the really pleasing thing for me is the performances in the past two games. We certainly haven’t taken the points we deserved and that gives me belief and hope that this group, with the addition of a few more in this window, will have enough to not just compete in League One next season, but have a right go.”

The Imps’ first test of the new year is against Karl Robinson’s Oxford United, a fixture in which Appleton is expecting a tough test.

He said: “For the past few seasons now they’ve proved they’re a top six League One side. Performances and results have proven that, and they’re almost a bit of a benchmark where we’re trying to get in terms of consistency levels and recruitment.

“Ultimately, if we can do our job in this 24 game period, that’s the bench mark we’ll be looking to get to."

The boss says new loan arrival Morgan Whittaker has looked sharp in his opening training sessions, adding he will be in the matchday squad for this weekend.

He added: “Because he’s so versatile he gives us options, a little bit like Chris Maguire. He has got real quality about him, has got a wonderful left foot and he can play either side or through the middle.”

Tickets to see potential debutant Morgan Whittaker against Oxford United can be bought now. There is also availability for upcoming fixtures at LNER Stadium against Cambridge United and Burton Albion later in this month too.